As firms explore applications for Indian consumers, the country is set to drive budget tablet market 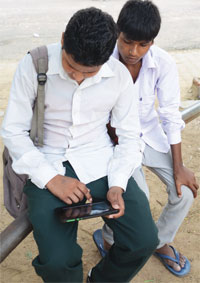 When Sangeet Srivastava laid his hands on the Ubislate 7 tablet, he was sorely disappointed. The second year student at the National School of Drama in New Delhi was swayed by the initial frenzy in the wake of the launch of the world’s cheapest tablet last year. Ubislate 7 is the alter ego of Aakash tablet, the brainchild of the Union Ministry of Human Resource Development. Aakash had promised a lot as a budget tool for the expansion of distance education. But poor hardware and service made the tablets a laggard. Barring their low costs—Ubislate 7 cost about Rs 2,250 while Aakash was launched on a pilot basis at a subsidised rate of Rs 1,500—the tablets were a complete disaster. As Srivastava puts it, his new gadget could not even connect to the Internet, a basic requisite if knowledge from the World Wide Web was to filter down to students in the rural and backward pockets of India.

Even though Aakash was a technical disaster, it did open the doors to low-cost tablets in India. Till its launch, the tablet market was dominated by high-end Apple iPads or its android clones. These were priced Rs 25,000 and upwards, catering to a niche market. The first locally made android tablet by Gurgaon -based Olive Telecom also sported a price tag of over Rs 20,000.

Within a few months of the launch of Aakash, cellular phone manufacturer MicroMax and computer giant HCL launched tabs that cost less than Rs 10,000. In the next 10 months there were at least a dozen models, if not more, selling as budget tablets. Their prices range between Rs 3,500 and Rs 7,000 (US $75 to US $150).

These budget tablets in no way can compete with high-end devices in terms of speed and user experience. Corners have been cut by manufacturers to sell them at magical prices. But in the process, it has opened up a world of knowledge so far restricted by the price barrier. This is especially true for India given that the country has only 20.99 million Internet subscribers of whom a meagre 13.35 million were broadband subscribers at the end of 2011. For the rest 97.5 per cent of the population, the Internet is still a mystery. In terms of application, these low-cost tablets can achieve in future what the poorly implemented Aakash could not.

Vishal Tripathi, principal analyst with Gartner, a Mumbai-based research firm, says manufacturers are trying to sell them as education tools targeting students. Tripathi reviews tablets for his firm. He says these companies have tied up with educational publishers to develop applications that can be used in these tablets. MicroMax has tied up with Pearson (parent company of Penguin books), Chennai-based Everonn, a specialist in satellite enabled learning, and Pune-based IT solutions company Vritti for its e-learning tablet called Funbook. An app developed exclusively for this tablet allows access to more than 500 smart courses, ranging from class 1 to higher secondary courses for CBSE, ICSE and various state education boards, and even preparatory material for medical, engineering and MBA, says a MicroMax press release.

Similarly, GoTech which sells tablets for Rs 5,900 has partnered with AcrossWorld, an open educational resources provider, to provide educational content on the device and has already secured several schools and colleges as its clients. An application called Attano allows students across various levels to access 1,500 books and 7,500 educational videos apart from study material for engineering and medical aspirants. GoTech’s chief executive officer Gaurav Khanna says his company’s product will be a platform to connect students to world-class education content. Both GoTech and MicroMax will specifically target smaller cities. 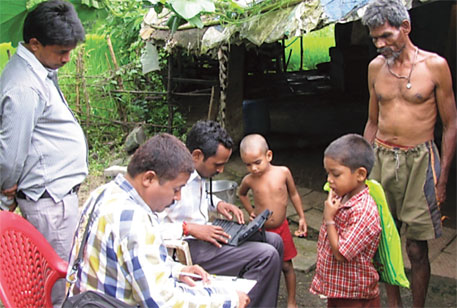 Suneet Tuli, owner of Datawind, the manufacturer of both Akash and Ubislate 7 tablets, is, however, optimistic. The low-cost tablet market in India will grow by leaps and bounds. In India, 30 to 50 million units of budget tabs will be sold in the next two years, he says.

Shyam Sundar Jyani, lecturer at Government Dungar College in Bikaner, has seen how these computing devices have helped children learn better. He has been involved in a project called One Laptop Per Child (OLPC) whereby 60 free tablet-cum-laptops made by OLPC Foundation are distributed to students of three villages around Bikaner. OLPC is an international non-profit based in Massachusetts and Miami that designs and provides cheap laptops to children in developing countries. Jyani noticed improved grades in all subjects among all users since 2010, the year the project was introduced. “The kids had only seen laptops and tablets in newspapers. Now they can use them,” he says. Even though there is no Internet in the villages, pre-installed Wikipedia application has kept the kids engaged, he adds.

Tablet as an education tool, is slowly but steadily gaining popularity, and this does not involve just the budget segment. In December 2011, a prestigious school in Mumbai, Podar International School, ordered that all their students will have to buy iPads as part of their educational paraphernalia. Akash Institute, a well-known coaching institute that prepares students for engineering and medical entrance tests, has launched its own tablet called Aakash iTutor. The institute distributes the tablet to students who enrol for its iTutor programme. They do not need to attend classes and can submit assignments online. Though its basic model priced at Rs 17,000 displays only text-based content, there are two other models priced at Rs 30,000 and Rs 50,000 that display text as well as video.

Social application (not facebook and twitter type) possibilities with these budget tabs are endless. These can be tailored to suit any requirement, be it health, agriculture or census; the list can go on (see ‘Power of a tablet’).

Android applications like the Heart Rate Monitor could be fun to use for people, but it uses solid science to detect the heart rate of a person. Anil Saxena, cardiologist at Fortis Escorts Heart Institute in Delhi, says the app works as well as other conventional devices like pulse oximeter. All one has to do is press the finger against the camera lens for 10 seconds. The heart rate begins to flash on the screen. The app relies on change in skin colour with every surge of blood in capillaries to detect the heart rate. Budget tablets also have the potential to improve public health services. Kanav Kahol who works with non-profit Public Health Foundation of India has developed a tablet called Swasthya Slate. It can monitor health related details like heart rate and body temperature, and can also check the purity of water. The tablet will not cost a bomb; it costs between Rs 4,000 and Rs 7,000, depending on the functions it performs. Kahol says the tablet could make life easier for rural health workers (see ‘Path lab in a tablet’, Down To Earth, April 15-30, 2012).

To start with, Kahol has offered 500 Swasthya Slates to the Andhra Pradesh government. The Swasthya Slate has been installed at e-governance centres, where people can get themselves checked for around Rs 100 for tests that would otherwise cost them upwards of Rs 1,000.

Narendra Gupta, activist with Prayas, a non-profit working on health policy in India, says while tablets hold promise for rural areas, their execution is fraught with challenges. “We have seen good ideas fail time and again in rural areas. For example, rural health workers like ANMs (auxillary-nurse midwives) fail to maintain simple apparatus for haemoglobin tests, a must for pregnant women.” Carelessness of rural workers would not go away with the change of device. They might break chargers and other components. Perhaps the government should check the effective implementation of health tablets on a pilot scale, he adds.

Dubbed as the post-PC tablet, the device could play a major role in several such development programmes. In 2011, the Union Ministry of Rural Development used a low- cost tablet developed by state-run Bharat Electronics Limited (BEL) on a pilot basis for the nation-wide Socio Economic and Caste Census. The ministry acquired some 600,000 units, which helped surveyors collect data from 728 million people right at their door step, assimilate the data and compile it on the central server without any glitch.

Sangeet Srivastava’s experience may have been a sour one, but the Ubislate 7 managed to open a market that no one knew existed.

A study by New York-based ABI Research shows tablets under US $400 (Rs 22,000) are set to capture more than 60 per cent of the global market share by 2016, while the market for tablets above US $400 will continue to dwindle. Like the small car, will India also become the driver for budget tablets.