A tale of two villages beguiled by JRY

The panchayats of Sonrai in Uttar Pradesh and Palana in Rajasthan share a Jawahar Rozgar Yojana experience. Both ignored the water needs of the villagers and spent the money instead on projects that are not even being maintained properly.

A tale of two villages beguiled by JRY 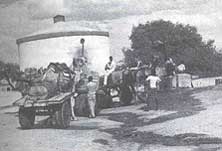 IN THE Uttar Pradesh village of Sonrai, water-starved residents eke out a living growing a single, rainfed crop of jowar or kodo (millet) on 500 sandy ha and by mining granite, phosphate or lead the rest of the time.

The village averages 85 cm of rain annually, sufficient to make construction of water-harvesting systems worthwhile. But sarpanch Indrapal Singh preferred to pave the lanes adjoining his house and to build a boundary wall for the school, two earthen check dams to water livestock, four culverts, 500 metres of a makeshift link road, a one-room house for a scheduled caste family and to repair two common wells. Singh explains why: "Our water problem will be solved only if we get a canal from the nearby Jamai dam. But we could not construct this, because our JRY allocation is a meagre Rs 90,000 annually."

Dugwells could not be constructed under the Jawahar Rozgar Yojana's Million Wells Scheme because the water table had dropped by 5 metres. But the only viable option for small farmers, says Basuri Choudhury who owns 1.5 ha, is a dugwell. "I was getting a well dug," he disclosed, "but I ran short of money and the work stopped." Now, he intends to borrow from a moneylender at 20 per cent monthly interest -- something that could leave him landless.

The number of wage-seekers in the village is more than 500 and they need employment for at least eight months in the year. Nevertheless, though Sonrai's panchayat received nearly Rs 3.5 lakh under JRY between 1989 and 1993, the panchayat was able to generate barely 140 persondays of work for 38 persons, most of them Singh's men, who settled for less than the minimum daily wage of Rs 23. Says labourer Rama Kushwaha, "Till last year, Rajendra Singh (the sarpanch's brother who gets the JRY work contracts) paid me Rs 12 and now, Rs 18."

It is also evident from the persondays created that the JRY-stipulated wage-material ratio of 60:40 has not been followed and spending priorities were decided by the sarpanch and not by the villagers. But the villagers are indifferent to the sarpanch's autocratic style. Explains Choudhury, "First, we don't know how much money comes to the village. Second, even if the sarpanch misappropriates funds, at least he does something for the village, unlike block officials."

Women's participation in the panchayat is paid only lip service, because though three of the members are women, Singh dismisses them, saying, "Their opinion merits no attention. Women cannot guide us." Women rarely attend the gram sabha's biannual meetings. Says Bimla Kushwaha, who attended her first meeting in 1990, "I found it very hush-hush and was never told again of any meeting." Her comment is a tell-tale reflection of the meetings, at which JRY funds are supposed to be socially audited. For all practical purposes, Sonrai's panchayat is a male-dominated, non-democratic body.

IN PALANA, a village amid the sand dunes of Bikaner district of Rajasthan, while the villagers cried for water, the panchayat frittered away the Rs 2.4 lakh it received under JRY mainly on building community halls used by the sarpanch's friends and relatives as cattle sheds and fodder stores. Two schoolrooms and some roadside water taps were also made.

Cattle-rearing is the main source of livelihood in the village and rainfed farming of kharif crops -- bajra, guwar (fodder), til and mot (the staple food) on 400 ha of sandy land is a secondary activity. Selling milk to a Bikaner-based cooperative dairy was once a major source of income for Palana's villagers, but overgrazing has forced the villagers to migrate to neighbouring districts and states several months a year.Dismissing a suggestion to develop the village charagah (pasture), Ram Narain, sarpanch of the recently dissolved panchayat, says, "How can we? Nothing grows in this desert unless there is water."

The region averages 23 cm of rain annually and droughts occur every two years. Although the village has piped water supply, most households rely on time-tested kunds (rainwater-harvesting tanks) as the main source of water for almost 10 months in a normal year.

The village is electrified but pump-set irrigation is not cost-effective because the water table is below 100 metres. Dugwells don't exist because, explains a farmer, Dhonkal Ram Meghawal, the administration provides only Rs 63,700 against the Rs 1.5 lakh required under the Million Wells Scheme.

Despite the water scarcity, the villagers did not protest when the panchayat chose not to take up water projects with JRY funds. Explains Manga Ram, a socially active farmer, "The Rs 75,000 we get under JRY annually is inadequate even to construct one dugwell, and community halls and water taps were needed in the village." Kinship considerations, lack of awareness and a fear of officialdom mute any collective protest.

Since 1989, the panchayat has generated only 136 persondays of employment for 52 persons from among more than 1,500 wage-seekers. Narain says, "Funds were not adequate to accomplish any major projects." More money was spent on material for projects undertaken in Palana than on labour generation -- a violation of JRY norms. One reason for this is JRY wage rates are lower than market rates. Says Syamadeen Teli, a mason, "I get Rs 45 under JRY, against Rs 70 in the market." Likewise, a wage labourer gets only Rs 22 against Rs 30.

Women's involvement, too, has been minimal because of social prejudices and low literacy (10 per cent). With one half of the village -- apart from the poor -- left out, the Palana panchayat has become a platform for vested interests.