There is a buzz about green buildings. Town planners are wooing developers with generous offers so that they construct structures that consume less power, water and material. Cities like Noida in Uttar Pradesh and Pimpri-Chinchwad in Maharashtra where construction industry is booming due to proximity to mega cities are taking the lead by offering extra built-up areas and financial benefits. But there is no check in place to measure the performance of these green buildings. Analysts say developers are taking advantage of such laxity to pocket the incentives.

As of now, the incentives are pegged to two rating systems that are in vogue in the country: one, the Leadership in Energy and Environmental Design (LEED) promoted by the Indian Green Building Council (IGBC), an industry lobby group, and two, the Green Rating for Integrated Habitat Assessment (GRIHA), jointly developed by Delhi-based non-profit The Energy and Resources Institute and the Union Ministry of New and Renewable Energy (MNRE). A rating system sets benchmark for green measures incorporated into a building to reduce its environmental impact and rates it accordingly.

The trend of offering incentives began in 2009 with MNRE reimbursing the registration-cum-rating fee of green buildings to developers. It also launched a scheme to reward the architects and announced incentives of up to Rs 50 lakh to urban local bodies if they offer property tax rebate to GRIHA-rated buildings.

In Pimpri-Chinchwad, developers can get up to 50 per cent discount on the premium amount of building permission charges, depending on the level of GRIHA rating. Noida awards 5 per cent extra floor area ratio for buildings over 5,000 sq m of plot area if they are LEED- or GRIHA-compliant. Delhi and Maharastra governments have also shown interests in the scheme. Last year, the Ministry of Environment and Forests announced that while giving environmental clearance to building projects, it would give preference to the ones pre-certified by LEED or GRIHA.

“The incentive schemes are a virtual goldmine. Everyone wants to cash in on them,” says P C Jain, chairperson of IGBC. Over 50 builders approached us in the past few months alone, and the list includes some of the real estate biggies. It seems the whole of Noida is suddenly interested in green rating, Jain adds.

Together, LEED and GRIHA have over 1,843 registered and 257 green-rated projects. But there is no way to check if the buildings actually save substantial amount of energy and water.

IGBC claims that a green building saves between 30 and 50 per cent of energy and reduces water consumption by 20 to 30 per cent. But unlike its US counterpart, the US Green Building Council, which proactively provides information regarding energy and water use and waste management to demonstrate what difference their rated-buildings has made, IGBC falls short of putting up any such information. “We have no written proof or corroborating figures on exact resource savings in the operational phase for the buildings rated so far,” Jain admits. “Rated buildings are only monitored for a year, that too by a third party. Thereafter, IGBC has no control over its performance.”

GRIHA, though a national programme of MNRE, remains equally opaque. It is not possible to obtain the information even under the Right To Information Act. Several RTIs filed by the Centre for Science and Environment, a Delhi-based non-profit, for details and performances of GRIHA-rated projects did not yield any information. MNRE replied that “the ministry is considering only government building projects. No government project has been given GRIHA rating so far.” It is strange that even though the government offers incentives to private buildings, it does not keep track of their performance.

V K Paul of School of Planning and Architecture in Delhi and member of the National Building Code Committee says projects that receive incentives must transparently demonstrate how they benefit the environment and society. Else, it could lead to a dangerous trend, considering the scale of the construction industry in the country and the dismal performance of monitoring agencies, he adds.

So far Noida is the only urban local body in the country that demands green buildings, claiming extra floor area ratio, to submit maintenance certificate once in every five years. Else, it would levy a penalty of 200 per cent of the purchasable value of the extra built up area on the developer. It is yet to be notified.

“We have also tried to build in a post-construction monitoring mechanism,” says Rajpal Kaushik, chief architect planner of Noida. “Since the rating system is at an experimental stage, we are not sure of the results. Once we are sure, we may make it mandatory,” he says. The onus of monitoring the performance of green buildings, however, lies on the rating agencies, he adds.

In the absence of clear information in the public domain, doubts loom over the effectiveness of the rating systems. “Good rating is not necessarily an indicator of sustainable building practices,” says Paul.

One of the most debated features is the extensive use of glass in building designs. IGBC has awarded high ratings to numerous such buildings. Saint Gobain, founding member of IGBC, runs a website called “glass is green”. This is when several researches have shown that glass houses trap heat. Thus it not only requires extra energy to cool the inner environment, it also contributes towards making the neighboring environment hotter. The problem is if these glass houses get away with high green ratings, they would become the norm.

Similar doubts have been raised about awarding green ratings to projects that are in conflict with the ecology. For example, the Commonwealth Games Village has drawn flak from environmentalists for its location. “Despite knowing that the games village was located in the Yamuna floodplain and is flood-prone, the project was awarded a 2-star rating by GRIHA,” says Manoj Misra of Yamuna Jiye Abhiyaan, a campaign group. Besides, the location of the games village violates the recommendations by the expert appraisal committee of the environment ministry, he adds. 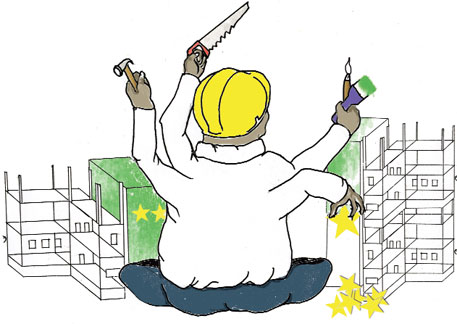 The problem is not confined to India. Several governments and rating agencies across the globe are also stepping back to assess how the green buildings are actually performing. The New York Times recently reported that several LEED-certified buildings in the US are underperforming. More than half of the 121 new buildings rated green in 2006 did not even qualify for the Energy Star label; they used more energy per square foot than at least 70 per cent of comparable buildings across the country. A majority of the green buildings do not keep track of their energy consumption once operational and cannot prove operational savings. Though developers use high-end technologies during the design and construction of green buildings, they offer inadequate post-operational care.

Amid these concerns, US’ LEED programme has announced that it would begin collecting information about energy use from all the buildings it has rated. For newly constructed green buildings, LEED mandates to provide energy and water bills for the first five years of operation as a condition for rating, failing which the label would be withdrawn.

But in the absence of any such stricture in India, developers are increasingly seeing reputation advantage in marketing the word “green”. It is now part of most real estate project names. Take for example, Palm Greens, Blossom Greens and Capital Greens building projects coming up in the National Capital Region and Royal Greens in Maharashtra. None of them are registered for green rating.