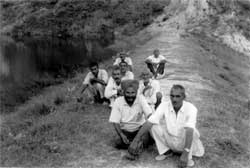 THE concept of joint forest management JFM is based on the interaction of forest departments with local people. However, the interests of people and forest departments could at times be at variance, as in Salehpur, a Gujjar-dominated village in Haryana near the border with Himachal Pradesh. The Hill Resource Management Society (HRMS) of Salebpur, a local organisation constituted by the villagers, has played a key role in JFM and pioneered various development initiatives in the village through its novel scheme of leasing out bhabbar (a kind of grass used mainly to make ropes) to generate funds. But, the state forest department's decision to auction bhabbar and fodder in the forest land threatens to shatter the villagers' dreams.

Salehpur has approximately 130 families, including 106 Gujjar and 20 Harijan families. The managing council of HRMS, which has nine members, including two women, looks after 377 ha of reserved forest. This land was earlier owned by the villagers but the government acquired it about 20 years ago - to turn it into a reserved forest - by paying a nominal fee of Rs 1,050 per ha to the owner. At present, six villages are subsisting on this forest: Mamtapur, Arsulpur, Thaska, Milak, Jhanda, and Salehpur.
Salebpur has two dams. The first was built at a cost of around Rs 10 lakh in 1982-83 by the state agriculture department. It started supplying water to 20-24 ha of land from 1983. But the outlet of the dam has been clogged since 1990 by silt from the catchment area. Neither the HRMS nor the agriculture department have taken any steps to remove the silt from the outlet.

In 1991, the forest department decided to build another dam about one km away from the first at an expenditure of around Rs 15 lakh. This dam can provide irrigation water for 40 ha of land. In the ensuing excitement over this new dam, everybody forgot the old one.

Desilting the outlet or strengthening the first dam would not have cost more than Rs 1 lakh. In 1995, the increased pressure of silt and heavy monsoon rains caused the spillway to collapse. Consequently, the dam burst. The resulting flood washed away fertile soil in four ha of private cultivable land, converting it into a wasteland. The destruction caused by the mishap amounts to at least Rs 10 lakh, the total cost of the dam. Besides, repairing the dam will now cost an additional Rs 10 lakh.

Krishan Lal, the sarpanch (bead of the village council) of Salehpur says, "We do not really need these dams. A good tubewell costs only Rs 2 lakh and is much more reliable (than dams) for irrigation purposes. If the government had really cared for the development of the village, it would have dug a number of tubewells. It would have been possible to irrigate the 120 ha of private land in the village with the money invested in the first dam."

Moreover, the construction cost of the first dam of Salehpur could have been much less. According to S K Dhar of Haryana forest department, the third dam of Sukhomajri in Haryana, which irrigates 16-24 ha, was constructed in 1981 - only two years earlier - at a cost of Rs 70,000.
The damburst woke up the people of Salehpur. Fresh elections to the HRMS council were held on October 4, 1995, and the new members undertook to do everything to avoid a mishap of such a magnitude in future. Krishan Lal, who has taken a lot of interest in the HRMS, saw the possibilities of making investments in community development. As the government provides only Rs 10,000 for the development of the village, the HRMS decided to lease the bhabbar and collected a stunning Rs 2,65,500 in the village fund, which could be effectively used to make significant improvements in the village.

The HRMS strengthened the second dam with the help of the village fund. As a result, a more equitable distribution of water has been achieved by laying a 1,890 metre pipeline. The water pressure of the dam is twice as high as private tubewells. The dam water can irrigate one ha of land in 10 hours, whereas private tubewells take 20 hours to irrigate the same area. Besides, as the new pipeline has many outlets, many people can withdraw water simultaneously, so that peak demands of water can be met fast and effectively. It also reduces the risk of failure of the wheat crop - the main winter crop.

This is probably why the villagers of Salehpur say that their society has been successful only since 1995. Earlier, the people had to sell all their goats. But now, even the Harijan families are rearing buffaloes.

In order to initiate more development projects, the HRMS needs to lease more bhabbar. The main problem in this village is the lack of irrigation facilities. There is an old tubewell in the village which can be used again for irrigating 40 ha of land by deepening the well. This will cost at least Rs 70,000. Land irrigated by a tubewell yields 6.97 tonnes per ha of grains per year. On the other hand, land irrigated by the dam yields 4.08 tonnes of grains per ha per year, while rainfed land yields only 1.22 tonnes Of grains per ha per year. The revenue from the yield is Rs 37,483, Rs 21,668, and Rs 8,109 respectively per ha of land irrigated by a tube-well, a dam and rainfall.


The success story, however, has started too late for the forest department. The officials are frustrated as nothing has been reinvested in the forest. They are also doubtful whether all the people are actually getting a share of the benefits from the forest.

In a recent move, the forest department has decided to tease the bhabbar grass through an open auction to generate an additional income of Rs 4.51 lakh, though the HRMS had already paid Rs 75,500 to it to secure the Inhabbar lease. The HRMS would have got at least Rs 5 lakh if they had leased the bhabbar grass, claims the sarpanch. No money has been repaid to the FIRMS so far, while the people of Salehpur are denied access to bhabbar and fodder grass in the forest.

Normally, the villagers collect fodder from the forest from November to March - after the harvest of bhabbar - by paying a nominal fee (known as danti) of Rs 100. But, if the decision to auction the grass is not changed, the villagers will also lose their right to collect fodder. The decision will have an adverse effect on the people of the Harijan community. Every family owns at least one buffalo and will have to bear an additional expenditure of about Its 4,000 for purchasing fodder.

The JFM programme seems to be breaking down here. And the people of Salehpur are not getting any reward for protecting the forests. This will only result in their alienation and force them to refuse further participation in JFM programmes.

The author is a PhD student at the Delhi School of Economics, University of Delhi