A way out of drought

Despite the government sinking crores, plight of the drought-affected people remains unchanged

A way out of drought 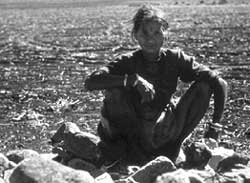 last year's drought in western Rajasthan had its beginnings in September and October when there was erratic and deficient rainfall, not uncommon to these parts of the country. Over Rs 800 crore was spent to counter the calamity. Since 1955, Rs 3,600 crore has been spent under Desert Development Programme and Drought Prone Area Development Programmes. Yet, there has been little difference at the ground level. To tackle this anomaly, drought relief measures have been assessed by agencies like The Oxfam (India) Trust, Ahmedabad through The School of Desert Sciences (sds), Jodhpur and the Disaster Mitigation Institute, Ahmedabad. sds carried out assessment studies between August 5 and September 10, 2000 in 16 villages covering Jodhpur, Jalore, Jaisalmer and Barmer.

The studies show that there is a clear difference between relief offered by the ngo s and that provided by the state. State agency works are directed more towards drought proofing the area by supporting permanent works related to water, construction of roads, schools, shops and airstrips besides food for work, cash for work, cattle camps, fodder supply and medical intervention. ngo s' works are more towards people's drought proofing and confined to individual support and those to community water structures, grain distribution, cash doles, cattle camps, fodder distribution, health camps, plantation and providing employment.

However, neither has the drought proofing of the area got off the ground nor were the people economically empowered. Most of the permanent works remained incomplete, abandoned for want of funds. It is high time that we redefine drought proofing mechanisms and interventions to generate more employment on a permanent basis.

Simple employment generation plans are needed. Eradication of mesquite (Prosopis juliflora) and lantana bushes (Viburnum lantana) should be taken up to generate useable biomass based on native species. They can also be used for food, fodder, thatching and fencing, herbal backup and as raw material for craft and cottage industries. Solar energy, biogas plants and other rural based economy generating jobs are the need of the hour during droughts.

Preserving and developing traditional water bodies should receive top priority with some kind of cost-effective mechanism and the management and ownership of water bodies should be decided in advance. Fodder banks have to be created in areas where natural pasturage is available. Such pasturelands should be optimally used and harvested scientifically. The procedure for deciding the relief beneficiaries needs to be revised. Information cells should be opened at village and tehsil levels. A nodal agency comprising ngo s and citizens should be formed to make the relief agencies accountable. The issue of crop and livestock insurance has to be decided as a coping mechanism. In the desert, rainfall records should be maintained in schools so that there is no delay in declaring drought affected zones.

If a modest beginning is made in these sectors for rural poor, irrespective of caste and creed, the livelihood issues can be addressed with positive results.

The author is director, The School of Desert Sciences