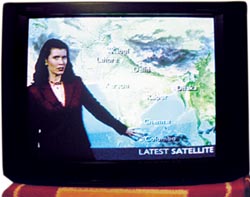 on June 21, 2004 , the Indian government released its first 'National Communications' report on climate change, its first 'official' document detailing the emission levels of ghgs, and present/future impacts. Under the United Nations Framework Convention on Climate Change (unfccc) -- to which India is a party to -- it is obligatory to prepare such an inventory.

According to the report, rising temperatures have already taken their toll on the country. With global average surface air temperature increasing by 0.4c during the past 100 years, there has been a 10-12 per cent increase in monsoon rainfall along the country's west coast, northwest India and north Andhra Pradesh. Food insecurity is expected to worsen, with rising temperatures making environs unfavourable for agriculture. The forest ecosystem would be worst affected -- by 2050, about 70 per cent of the vegetation is expected to be less than optimally adapted to its existing location, making it vulnerable to increased biotic stresses.

The report concludes by stating that comprehensive planning is required to ensure that least percentage of the population is affected. "At present, we practically have no policies related to adaptation and mitigation, despite millions of people at risk. This is because very few concerned officials understand the grim reality," says Subodh Sharma, national project director, National Communications Project, the Union ministry of environment and forests.

As the unfccc negotiation process shows, laxity has become all-pervasive in the world community . This despite the fact that responses to the rising temperatures are already visible though we are at an early stage of global warming. Already we have pumped out enough ghg s to warm the planet for many decades to come. It won't be easy for a world addicted to fossil fuels to limit emissions. But limit we must, for the current signs of warming are merely a taste of the havoc the next century could bring. We should act, avert the worst of it. Else, the destruction that normally happens in geologic time may happen in the span of a human lifetime. Act and adapt. Now.