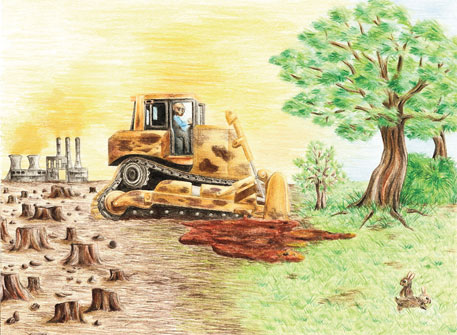 Coming down heavily on the environment ministry, the country’s top auditor has highlighted serious regulatory lapses in forestland diversions in a report tabled in Parliament recently.

The Comptroller and Auditor General of India (CAG), while examining the performance of Compensatory Afforestation Fund (CFA), found that the Ministry of Environment and Forests (MoEF) had failed to promote compensatory afforestation. In complete violation of environment norms, there were unauthorised diversions of forestland for mining. MoEF also failed to monitor compliance with the conditions laid down in the Forest (Conservation) Act (FCA), 1980.

“Numerous instances of unauthorised renewal of leases, illegal mining, continuance of mining leases despite adverse comments in monitoring reports, projects operating without environment clearances, unauthorised change of status of forestland and arbitrariness in decisions of forestry clearances were observed,” the report notes.

Between August 2009 and October 2012, the ministry invoked penal provisions in only three cases. In these, too, show cause notices were issued. What’s more, the ministry and its regional offices did not make 64 files available to CAG for audit.

Funds grow, afforestation does not

Between 1980 and May 2004, as much as 921,000 hectares (ha) of forestland was diverted for non-forest use. To compensate for the loss, the Supreme Court ordered the user must pay an amount which would be used for forest regeneration, management, infrastructure development and wildlife protection. In October 2002, the apex court ordered formation of CFA. The money received towards compensatory afforestation, penal afforestation and net present value of forestland would go to CFA.

To manage this fund, in April 2004 the ministry notified Compensatory Afforestation funds Management and Planning Authority (CAMPA). But two years later, the apex court observed that CFA had not become operational and an ad-hoc CAMPA had been set up. It ordered all funds for afforestation to be transferred to ad-hoc CAMPA, which would be audited by CAG.

Utilisation of CFA by state governments has also been dismal, CAG reports. Between 2009 and 2013, state governments used only 61 per cent of the funds (Rs 1,775.84 crore) released by the ad-hoc CAMPA, leaving Rs 1,149.81 crore unused. However, it used Rs 52 crore for unauthorised activities such as building renovation, vehicle purchase, cell phone charges and honorariums.

Forest rights activist Shankar Gopalakrishnan is not surprised. “CAMPA is a ridiculous process. It is just an eyewash,” he says. There is no way afforestation can compensate for the humoungous environmental loss forestland diversions create, he says. A glaring omission in the CAG report is the performance of Forest Rights Act, he adds.

MoEF in the dock

Citing specific cases, CAG states Andhra Pradesh Electricity Board diverted forestland for Nagarjunasagar dam without the Supreme Court’s approval. Officials in the state forest department say there was misunderstanding of facts caused because a different data was provided by the irrigation department. “The irrigation department has given a different submergence area for the project. This would require another clearance from the ministry,” a senior state department official states.

CAG reported that forestland diversion figures of state governments and the MoEF did not reconcile. “This can happen because of incorrect data input,” says a Madhya Pradesh forest official. There is a need for a sophisticated online system to maintain data, the official adds.

This apart, in all the 219 projects CAG inspected, state governments had renewed mining leases without MoEF’s approval. On its part, the ministry failed to carry out cost-benefit analysis of these projects. This means forestland was diverted without ascertaining its affect on people. When questioned by CAG, the ministry chose to remain silent.

“MoEF not only did not exercise due diligence in ensuring compliance with (FCA) conditions but also inexplicably overlooked the deficiencies pointed out by a subordinate authority while granting exemption in the instant case,” the report states, talking about Sasan Power Limited, a special purpose vehicle of Reliance Power Limited. In June 2007, Madhya Pradesh government sought MoEF’S approval to divert 321 ha forestland to build an ultra mega power project in Sidhi district. MoEF gave its in-principle nod in December 2008 and the final clearance in April 2009.

The state government simultaneously applied for diversion of 1,064 ha forestland for coal blocks for Sasan ultra mega power project. Again, MoEF gave its in-principle nod in November 2009 and final clearance in May 2010. As per CAMPA guidelines, Sasan Power should have provided 1,385 ha non-forestland for compensatory afforestation in Sidhi or its proximity. But the company produced a certificate from the Chief Secretary about non-availability of forestland in Sidhi, and MoEF blindly exempted it from giving equivalent non-forestland. This is in violation of CAMPA guidelines, admits a senior Madhya Pradesh forest official. It did not ask Sasan Power to identify non-forestland in other areas of the state. In fact, the company was allowed compensatory afforestation on double degraded forestland. This despite the ministry’s regional office pointing out the company’s ineligibility for the exemption.

When CAG asked MoEF to explain its position, the ministry blamed Sasan Power for not furnishing all the details. CAG refused to accept its clarification and asked for a detailed reply. “We gave all the information CAG had asked for,” says the forest official. “We are now verifying the information which they used and which they missed out. We are also checking if there was misinterpretation of data”.

Under FCA, in-principle forest clearances can be revoked if projects do not comply with its guidelines. CAG found that MoEF had not revoked 1,022 forestland diversion proposals, involving 254,000 ha, despite users not complying with the guidelines. According to MoEF, the onus of compliance lies with the user and the state government.

However, while granting clearance to Acciona Wind Energy Private Limited, the ministry did warn the company that the entire forestland in Karnataka would be reverted if it failed to develop the wind farms. Nothing of the sort happened despite Acciona not complying with FCA guidelines.

CAG states, the penal clause in FCA is too mild to deter illegal practices. It prescribes, at the most, simple imprisonment of 15 days for someone who contravenes an FCA provision. Gopalakrishnan favours enactment of stricter punishment but says it will not solve all the problems. “Forest clearance is the most opaque and autocratic process in the country,” he says and suggests democratising the process. Forestland diversion proposals and details of compensatory afforestation should be put in public domain, he says.