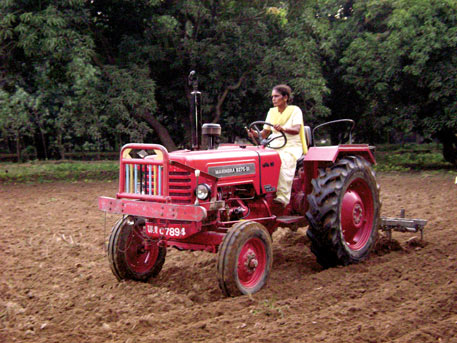 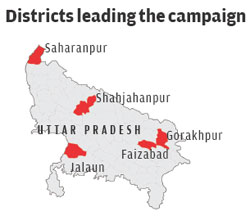 Breaking the stereotype of rural women, 39-year-old Suresho Saini proudly drives a tractor to plough 1.6 hectares (ha) of agricultural land in Rahimpur village in Uttar Pradesh’s Saharanpur district. The plot belongs exclusively to her. “Women working in agricultural fields are a common sight in India; yet when we think of a farmer, we always think of a man. Even our imagination is biased. Why?” she asks, showing her disapproval of the prevalent patriarchal mindset. To justify, she recalls an incident in 2009. “When I had applied for a Kisan Credit Card, the officials concerned demanded that I bring my husband along. I was very angry. ‘You never asked for me when my husband was getting his card; so why do you want him to be present in my case?’ I retorted.” She got the card and has since taken loan on it twice for agricultural purpose.

Women from villages across Uttar Pradesh are now joining hands to eliminate the gender bias in agriculture and to demand joint ownership of land. They have organised their cause into a movement to empower themselves. In February this year, thousands of women participated in a march called “Gram Sabha to Vidhan Sabha” and reached Lucknow, demanding the inclusion of their names in government records as co-owners of their family’s ancestral land.

The march was part of the campaign called Aroh, meaning “towards progress”, which was launched in 2006 by Gorakhpur Environmental Action Group (GEAG). The purpose of the campaign was to empower the “real” contributor to agriculture. If one goes by the National Sample Survey Organisation (NSSO) data of 2011, rural women in India constitute 79 per cent of the agricultural workforce, while only nine per cent of them own agricultural land.

When the campaign began in Uttar Pradesh, the situation was worse. GEAG roped in four civil society groups—Vinoba Sewa Ashram, People’s Action for National Integration, Disha Samajik Sangthan and Samarpan Jan Kalyan Samiti—to conduct a survey covering 100 panchayats in 50 districts of the state. The results showed that 97.7 per cent women were contributing to agriculture-related activities, but hardly 6.5 per cent women had land ownership, out of which 81 per cent were widows and 19 per cent inherited it from their parents as they were the single child.

Fighting for land, fighting for dignity
Suresho’s fight for land ownership also helped her regain the respect of her family. Her struggle began when her husband and in-laws deserted her after two years of marriage and asked her to leave their house. When she refused, she says, they filed a police complaint against her on “bogus charges”. Suresho retaliated by lodging a counter-complaint, accusing her in-laws of harassment. Scared, they tried to persuade her to return home. Suresho had, in the meanwhile, got in touch with Aroh campaigners and learnt about their fight. She used this opportunity to demand ownership of 1.6 ha of land in her father-in-law’s 9.3 ha of ancestral property. Seeing no choice, they agreed. Feeling empowered, Suresho counselled her parents-in-law and ensured that they gave 1.6 ha of land each to her two sisters-in-law as well.

Shubhawati Rao’s struggle for land began when she, together with many others in Khorabar village in Kushinagar district, fought to free 0.04 ha of deeh land from encroachers for chhath puja. Deeh land is used for non-farming purposes like construction of house or holding of ceremonies. Mustering courage and with the support of other people, she decided to fight against her neighbour who had for years encroached upon her private land. When she learnt about Aroh in 2007, she approached the campaigners and with their help filed a court case against her neighbour. The case is still on.

Noble goal, legal bottlenecks
Sustainable agriculture is not possible without the participation of women—this was the idea behind Aroh. GEAG president Shiraj Akhtar Wajih says his group had been working with small and marginal farmers in Gorakhpur. “Though there was no gender-specific information available in those days, our experience showed that women were contributing more to agriculture than men,” he adds. GEAG realised that identifying women as farmers means more than giving them just a “name”; it involves entitlement to land holdings and benefits under government schemes. 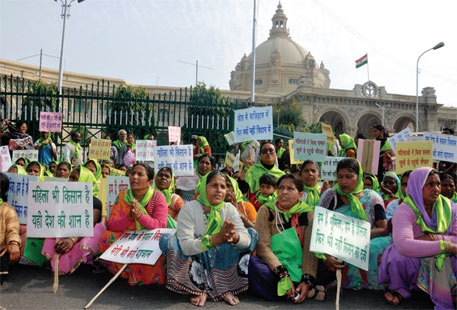 The campaign was funded by Oxfam India, a rights-based organisation. To begin with, the groups picked five districts, and five villages in each one of them. Teams of 20 members, including male and female volunteers, were constituted for each village. They addressed the problems of women and provided legal aid where needed. In cases of domestic violence, they counselled the women and family members involved, built up social pressure and helped the victims lodge complaint with the police. But challenges were plenty. Not everyone was open to such intervention. “Many were sceptic about the idea of giving ownership of land to women. They asked us, ‘What if the women sold off ancestral property once they acquired land in their name?’ We had to convince them that the demand was for joint ownership and not single ownership of land and that both the husband and wife would need each other’s consent before selling off the property,” says Tasneem, one of the coordinators of Aroh.

Gradually, the course of action shifted to slogans, distribution of books and pamphlets and signature campaigns to increase awareness about co-ownership of land. The first major success of the campaign came in 2007 when a 38-day-long, 1,500-km march for the rights of women farmers was launched. Forty-two thousand women and 15,000 men participated, out of which 832 men agreed to share the ownership of their land with their wives. Another march in 2009 saw the participation of 97,000 people, of which 23 per cent were men. During the course of the march, 6,800 men farmers signed letters of agreement to share their land with their wives. Following in the footsteps of Uttar Pradesh, similar groups are now emerging in neighbouring Bihar and Odisha as well.

Besides the social challenges, the campaign faced a legal hurdle when the signed letters were sent to the revenue department in 2009. Citing provisions in the existing land and revenue laws, deputy land commissioner Vijay Kumar Yadav wrote in his letter to GEAG that inclusion of the wife’s name for joint ownership of agricultural land is not possible without a formal registration or power of attorney. The registration fee is quite high—while it is six per cent of the total cost of land for women, for men the fee is eight per cent of the total land cost. Yadav did mention a provision under the Hindu Succession (Amendment) Act, 2005, by means of which a woman can inherit land—when a land owner dies, the name of his wife and unmarried daughter will feature in the list of inheritors along with the name of his son. The land distributed by gram sabha to families also includes the names of both husband and wife. But the campaign demands joint ownership of land for women farmers living with their husbands.

Money has been an important factor discouraging male farmers from sharing the ownership of land with their wives. Sriraj Singh, a 60-year-old farmer from Daulatpur village in Saharanpur, has purchased 1.33 ha in the name of his wife, Premlata Saini. “I do not mind sharing my property with my wife, but what is the point of spending so much money for an exclusive ownership when both of us enjoy the fruits of the same land?” he asks.