Twenty years after the Supreme Court asserted that people have a right over radio waves, community radio continues to struggle. Instead of supporting the stations, the Centre now plans to carry out a listenership survey to gauge its impact and decide its future 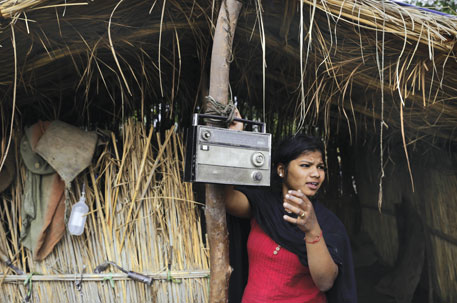 Come friday and the telephones at Gurgaon Ki Awaaz, a community radio station, will ring off the hook. The reason for the deluge of calls is that its most popular weekly programme Chahat Chowk is aired on Friday afternoons. And the one-and-a-half hours programme, which talks about reproductive and sexual health, is driven by queries raised by its listeners.

“We had started Chahat Chowk in 2010 with the plan of airing just 16 episodes, but we decided to continue with it because of the popularity. We receive queries throughout the week, and the number of phone calls from our listeners shoots to more than 50 on Fridays,” says station director Arti Jaiman.

Gurgaon Ki Awaaz is arguably one of the few community radio stations in the country with 22 hours of broadcast daily. Jaiman says the show has not only dispelled a lot of myths about pregnancy and contraception, but has been successful in reducing the stigma associated with such topics in the rural area of Mullahera.

But despite its popularity, Gurgaon Ki Awaaz, like most other stations in the country, is struggling to keep afloat because of government apathy, competition from commercial radio channels and lack of funds.

“For masses, community radio is ‘us’ as against the big media, which is ‘them’,” says Rajiv Tikoo, director, One World Foundation India, an organisation that has been helping communities set up radio stations.

But two decades later, the concept of community radio has not caught on. This despite the fact that almost all the governments at the Centre have promised to strengthen the medium which, they say, is “an integral component of the right to free speech and expression”.

On November 16, 2006, the United Progressive Alliance government at the Centre promised that there will be more than 4,000 community radio stations by 2010. But on July 1, 2014, only 170 stations were operational, according to the Telecom Regulatory Authority of India (TRAI). 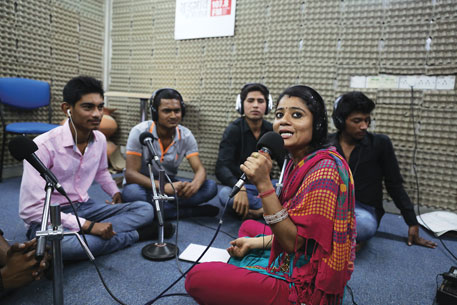 A year after the Supreme Court verdict, a parliamentary subcommittee headed by Ram Vilas Paswan formulated a working paper on national media policy in March 1996. The paper emphasised on the setting up of non-commercial broadcasting stations to be run by universities, educational institutions, panchayats, local bodies and state governments.

As a result, the first licences for community radio were given to educational institutions and government-run agriculture universities and not to local communities. In fact, the first station run by a community was launched as late as in 2008.

“By definition, community radio should be a non-state, non-market venture, owned and managed by the community. But in practice, most community radios (in the country) are being run by educational institutions and even religious trusts,” says Vinod Pavarala, UNESCO Chair on Community Media at University of Hyderabad. 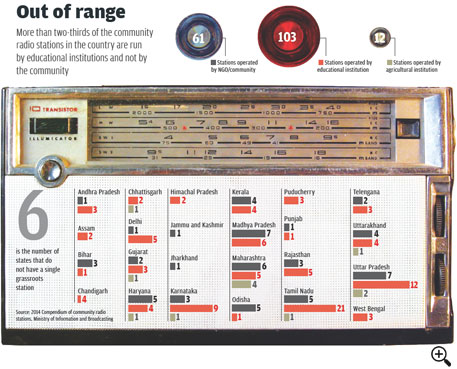 This is a fundamental problem because the issues that are important to a community and an educational institution are different and as a result the content has to be different. According to a paper presented at the information and broadcasting (IB) ministry’s National Consultation on Community Radio in India in December 2010, two-thirds of the community radio stations operating in the country are run by institutions and as a result local participation in content generation largely remains missing.

India got its first commercial radio station in 1993. The government took another nine years to formulate the first guidelines for community radio. And the guidelines, released by IB ministry in 2002, were restrictive in nature. It said community radio stations cannot use transmitters that have capacities higher than 50 watts. At the same time, most commercial stations use transmitters with 3,000 watts capacities that reach a larger listener base.

While 50 watts transmitters work well in rural areas, they are grossly inefficient in urban spaces that have high-rise buildings and in places with hilly terrain. Radio Khushi discovered this a couple of years ago. In 2013, officials from the IB ministry visited the community radio station run by the Guru Nanak 5th Centenary School in Mussoorie because allegedly the programmes from the station could be tuned in from Ambala. This happened because the station’s tower is installed at a place on the mountains that obstructs the broadcast from reaching Mussoorie and Dehradun city but gets transmitted to the plains. This can be addressed if the tower uses a transmitter of higher capacity.

Low-wattage transmitters also fail to work in places where villages are separated by long distances. “One such example is Rann of Kutch where villages are separated by many kilometres. The government should make an exception because of the geographical difficulties and allow the use of higher-wattage transmitters,” says Pavarala.

Jaiman says 50W is also insufficient in urban places such as Gurgaon as the frequencies get blocked by concrete buildings. “Gurgaon Ki Awaz is not received in buildings that are more than 12 metres high,” says she.

Community radio operators also complain that the process of getting licences is time-consuming. This, they claim, favours commercial radio operators who have deep pockets and can wait. “It takes around five years to get a licence, while it should be issued in a month,” says Bijoy Patra of oneworld.net, which helps communities set up radio stations.

“One of the biggest reasons for the delay in issuing licences is lack of coordination between various ministries,” says Supriya Sahu, former joint secretary of the IB ministry. (See ‘Licensing process’)

According to government figures released in February 2015, the IB ministry has received 1,692 fresh applications and it has issued letter of intent to 409 of the applicants. Out of the 409, 218 have managed to get the Grant of Permission Agreement and are waiting for the licence. “While the IB ministry has been proactive in clearing licences, their counterpart (Ministry of Communications & IT) has been slow in allocating licences,” says Ram Bhatt, vice-president, Association Mondiale Des Radio diffuseursCommunautaires, a global association of community radio broadcasters.

Patra highlights another problem community radio station applicants face. He says following the 2G Telecom Spectrum scam, the Ministry of Telecom has started issuing an undertaking to all the radio operators, commercial and community, which states that spectrum allocations can be cancelled at any time in the future and that the ministry has no liability. “This acts as a deterrent for cash-strapped communities,” says he.

The one thing that is common to all community radio stations is that they are cash-strapped. A station with four hours of daily programming incurs a cost of a little less than Rs 3,000 a day (see ‘Average monthly cost’). 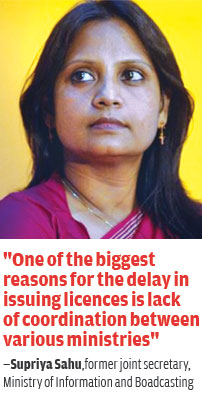 The existing DAVP rate is Rs 4 per second which is rather high for advertisers in rural areas. This means the stations have to charge more than Rs 4 per second from other advertisers, which they say is not possible. The TRAI report recommends that the DAVP clause be relaxed. “I am finding it difficult to get sponsors sitting here in Gurgaon, which is in the middle of the industrial hub and close to the national capital. One can only imagine how the channels sustain themselves financially in remote areas,” says Jaiman. The problem does not end here. Most stations say getting the bills cleared from DAVP is a task in itself. “The payments are often not made on time, causing delays in paying the station staff,” says Jaiman. 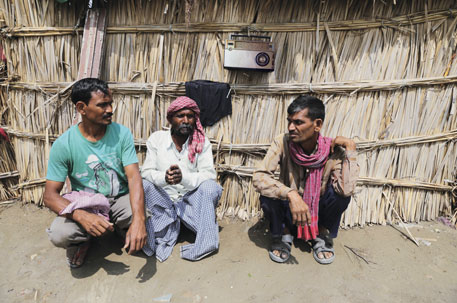 But Jaiman says most community radio stations will find it extremely difficult to even fund 50 per cent of the cost on their own.

Ravi Negi of Radio Hemvalvani that is aired in Chamba of Uttarakhand says many lives could have been saved during the 2013 flash floods in the hills if his radio station was allowed to transmit news.

“The government had failed to forecast the magnitude of the rains. So, once the rains started, we could have forewarned the people in the remote areas and many of them could have travelled to safety,” says he.

Negi’s sentiments have been echoed time and again by different government-appointed committees as well. In 2000, the government appointed Amit Mitra, former chairperson of the Federation of Indian Chambers of Commerce and Industry, to look into the demand. His report said private radio should be allowed to broadcast news. In 2004, when TRAI was made the broadcast regulator, it recommended the government to allow news broadcast by radio channels. 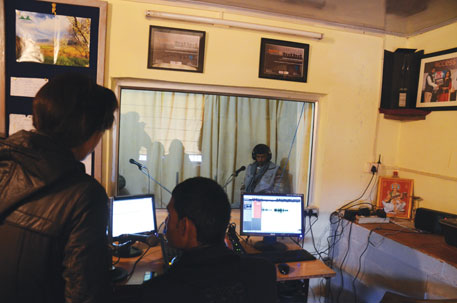 The government, however, maintains that news cannot be allowed on radio as it might be used for anti-national purposes. The level of mistrust in the minds of politicians can be gauged from the fact that till recently, not a single licence was issued in states affected by insurgency such as Jharkhand, Uttarakhand and Northeastern states.

And while India is still struggling with the idea, neighbouring Nepal has successfully allowed broadcasting of news on private radio channels (see ‘Tune in to the world’). 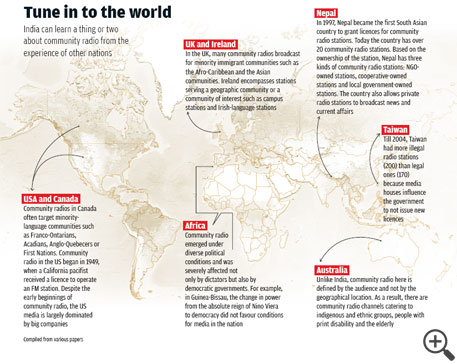 In December 2013, Delhi-based non-profit Common Cause filed a public interest petition in the Supreme Court of India, contesting the ban on news by private and community radio stations. While the verdict is awaited, former Union IB minister Prakash Javadekar had hinted last year that the present government may allow private radio stations to broadcast All India Radio news without alteration.

No respite in sight

Experts are wary of the intent and say the real reason behind the survey is the government’s plan to discontinue community radio stations that have small listener base. This, they say, is being done because there is a shortage of frequencies. 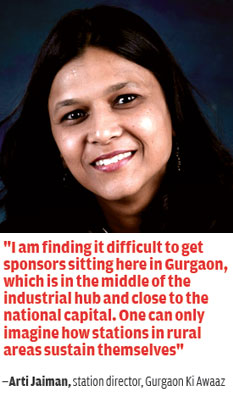 Pavarala says the idea of gauging the efficiency of community radio stations by the number of listeners is bizarre. “The service provided by community radio should be evaluated in terms the social value it represents,” says he.

IB officials justify the move by saying that the survey will serve as TRP ratings and in the process help community radio stations attract more advertisements. “With the help of these surveys, we will be able to extend financing schemes to the community radio operators,” says a senior official of the IB ministry.

Pavarala says, “The pro forma given for the survey reflects a particular, narrow quantitative approach to research and is not tailored to the context of particular communities.” He adds that the attempt to gauge the outreach of the stations goes against the 1995 Supreme Court judgement.

Experts also say that instead of wasting time and money on the survey, the Centre should take simple steps to strengthen community radio in the country.

For starters, all operators unanimously say the process for granting licences needs to be streamlined. “Many of us who have worked on the field have been asking the government for a single window system,” says Pavarala.

Union finance minister Arun Jaitely at an event last month said that his government is dedicated to strengthening community radio in the country. Experts say it is time the Centre underwent a paradigm shift to keep the radio within the reach of the community.