No major agrarian reform has happened in the 50 years since the Green Revolution. A normal monsoon cannot be assumed as the only incentive for farmers to sustain productivity. It's time India offered its food producers a new deal 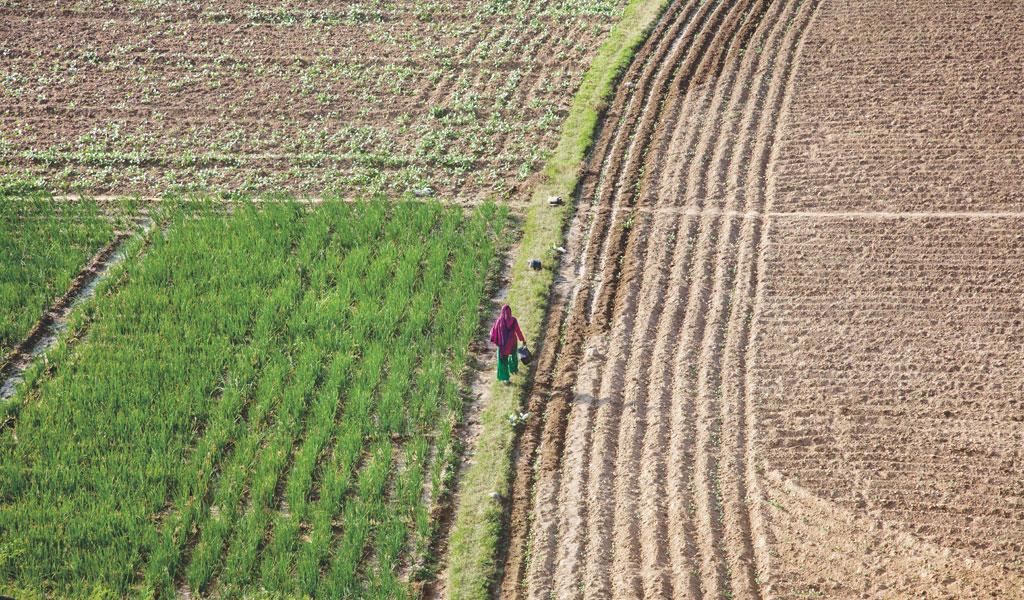 There is no end to the woes of Indian farmers. They have not been cheered by the forecast of a second consecutive normal monsoon. Rather, they have taken to the streets, demanding a new deal from the government. Farmers in more than 12 states have been protesting for the past eight months, spanning two major crop seasons (see ‘Farm rut’). But their demands offer a picture of contradiction. In southern states, which reel from the worst drought in over a century, farmers are demanding agricultural loan waiver and government assurance on better prices for their produce, while those in northern and western states are demanding the same despite a historic harvest. For the latter, this is the second normal monsoon after three years of deficit rainfall and travails of severe agrarian crisis. Yet, not a single day has passed in the recent past without farmers’ protests. The killing of six farmers by the police in Madhya Pradesh was just a brutal turn of events in this never-before-seen agrarian unrest.

Ideally, at this time farmers and governments should have been out in the street celebrating two milestones the country has achieved in recent times: a record food grain production in 2016-17 and the 50th year of the Green Revolution that propelled India to food self-sufficiency. Instead, farmers dumped potatoes, tomatoes, milk and other produce on the roads to protest the “historically low" prices they got. The starkest example is onion, a vegetable whose high price has always triggered political storms.

Arguably, this is for the first time that farmers and politicians are worried about the dipping price of onions. It is also a sign that there is something seriously wrong in the agriculture sector that we either do not care about or prefer to dismiss conveniently.

The current crisis is a culmination of decades of such negligence. Increasing the production of food grains has always been the strategy to sustain farmers and indirectly, make the country self-sufficient in food. That is why whenever a drought strikes, the immediate focus is on bringing water to the farmers’ fields. Expansion of irrigation networks and regular drought relief in terms of temporary income generation activities, such as public wage programmes, become the most important agricultural interventions. While this strategy has helped mitigate farmers’ woes to some extent, it has failed to keep pace with the booming production of food grains. With more produce, the market has become the most important point of intervention. This is where the government has failed, and this is where the seeds of the current crisis have been sown. Farmers with bumper crops need markets to trade, that too at a price that at least earns return on their investments.

At the core of the current farmers’ protests is the dip in prices of their produce. The market is anyway not favourable to farmers. Instead of ensuring a better deal for them, the government allowed large-scale imports of agricultural produce. This, while being aware of the bumper harvest riding on last year’s normal monsoon. This is a criminal step because common sense says when farmers are harvesting a normal crop after three years of inadequate yields, the government needs to ensure that they get a fair price for the produce to recover the past losses. But farmers earned next to nothing from their crops as the market was flooded with imported produce. In Maharashtra and Madhya Pradesh, farmers earned about Rs 3 from a kilogram of onions and Rs 4 from 1 kg of wheat. For them, it is a loss of around 70 per cent on their investments. This added to their past pile of debt. Small wonder, most of the recent farmer suicides have happened in places where the harvest has been better.

Is there a way out? Judging from the government strategy, it seems that India is no longer worried about self-sufficiency in food production. It has almost made up its mind to depend on food imports. This is an undeclared detour from the national objective. So, under this strategy, the produce of Indian farmers or the price they get for it are no longer the concerns of the government. This is evident from the obsessive focus on taming inflation, particularly food inflation. Currently, India is witnessing one of the lowest levels of inflation in recent years. And to reach this level, the government has flooded the market with imported agricultural produce.

But what about the government’s commitment to enforce the minimum support price (MSP) for select farm produces? In fact, the government has now a plethora of schemes and strategies to ensure that farmers are protected from vagaries of the market. Starting from setting up a price stabilisation fund to maintaining prices of certain products and insuring crops against weather uncertainties, the Union government and state governments have implemented close to 200 schemes that cover the complete agriculture cycle of a farmer. But none of the schemes cover even 10 per cent of the country’s farmers. The MSP does not cover 94 per cent of the farmers and does not mean a profit to those who are covered under it.

On the other hand, agriculture as an economic sector has never received the kind of strategic nurturing it deserved. Since the Green Revolution, India has witnessed many changes in its economic profile. Today, there are many new economic sectors that were never imagined 50 years ago. But the country has adapted to them to claim global accolades. For example, the information technology (IT) sector. In the two decades since IT arrived, India has jumped on the bandwagon and nurtured a booming new workforce to take the leap forward. Today, it is a global leader in IT and its services have become essential worldwide. Now compare this with the government’s approach towards farmers and farming. This sector has never received consistent support, except for politically-correct schemes and budgets. Rather, there is a national plan to shift people from agriculture to other sectors. While there are valid arguments for this, the Indian reality is that a significant number of people still depend on agriculture. And shifting people from farm to non-farm activities requires the latter to grow at a stupendous rate, which is not possible yet.

In June 2015, in a cover story, Down To Earth warned that India was staring at a very severe agrarian crisis that could hurt the national economy. Two years later, it is already unfolding. India’s annual food import bill is now at Rs 1.40 lakh crore—5.63 per cent of the country’s total import bill and second only to the country’s oil import bill. Sooner or later, economists would bring this out as a major fiscal constraint, just like in the case of oil, for which we do not have any alternative. After a few years, the food subsidy bill will be talked about and subjected to major cuts as the government would cite the increasing food import bill. Even though farmers in India do not directly get subsidy, it goes to an important input: fertilisers. To compensate the high import bill, the government would look at other cuts in agriculture-related schemes, such as irrigation and power for farmers. It would also trot out the same argument: as food is being imported and paid for, why should local producers be supported? To sum it up, the farmers are not going to get a better deal for their produce. That is the reason they now dread a normal monsoon. Be it a drought or a more-than-normal monsoon, if you can’t sell your produce with a profit, it is not a trade for sustenance. 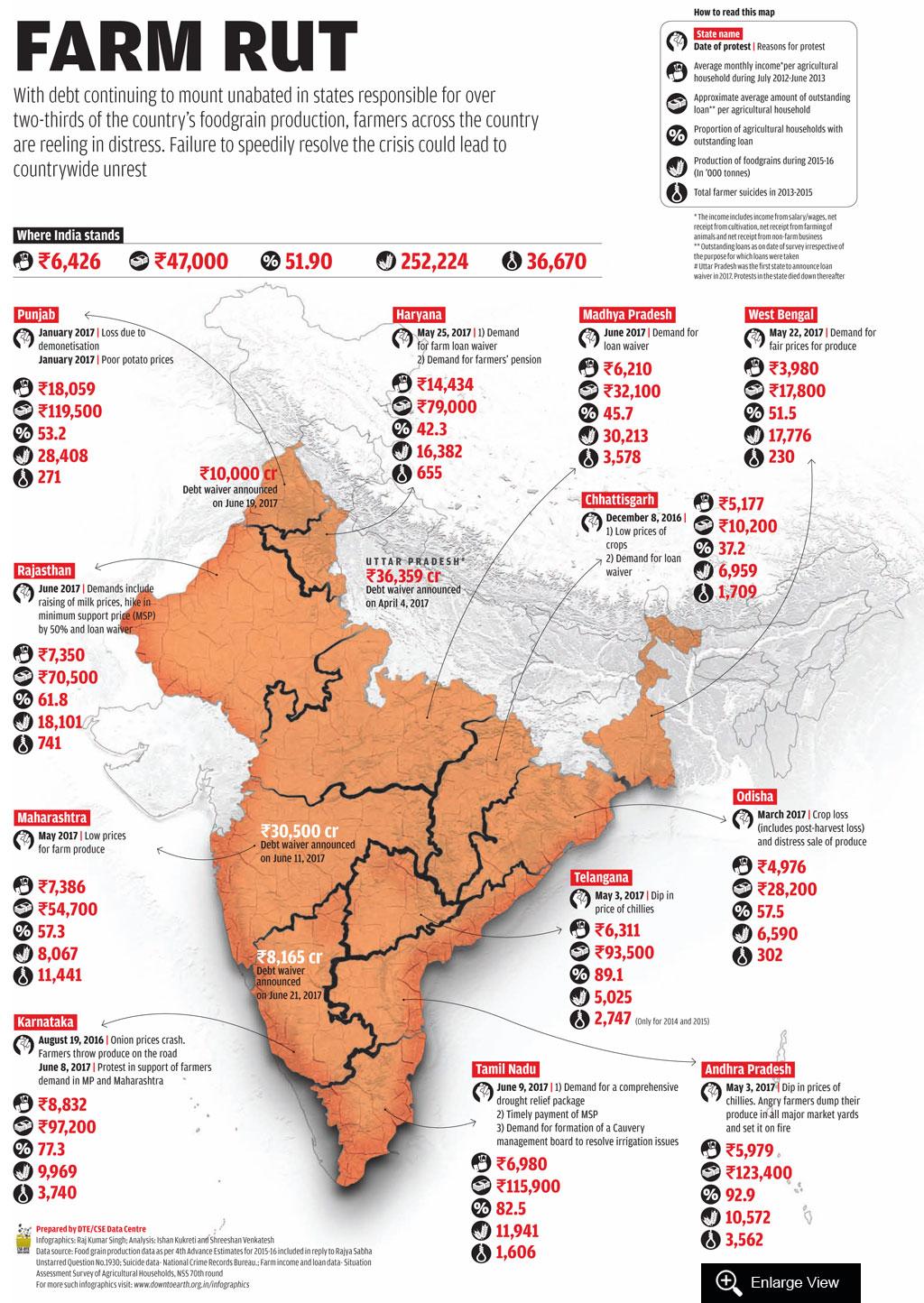