With high pollution levels and growing heat stress due to climate change, the ozone level is frequently exceeding the standards

What do the findings suggest? 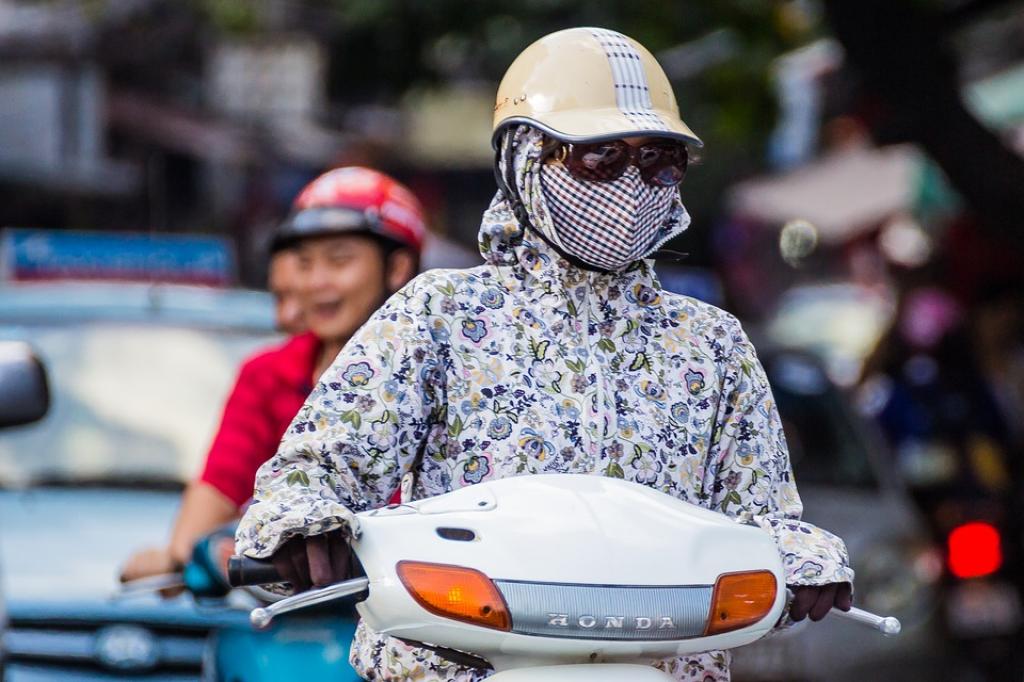 On the eve of the World Environment Day, the Centre for Science and Environment (CSE) has a word of caution: no one is safe from deadly ozone pollution. According to an analysis done by the CSE, Delhi has witnessed significant ozone build-up this summer, adding to public health risk. CSE has analysed real-time air quality data available from key monitoring locations of the Delhi Pollution Control Committee for the summer months of 2016 and 2017.

The analysis shows ozone pollution in the city is worsening progressively with the onset of summer. With high pollution levels and growing heat stress due to climate change, the ozone level is frequently exceeding the standards and rising to poor and very poor levels—as classified by the National Air Quality Index (NAQI). In addition, heat waves and sunshine have increased the frequency of days with unhealthy levels of ozone. Ground-level ozone is not directly emitted by any source. This is formed when oxides of nitrogen (NOX) and a range of volatile gases, primarily from vehicles and other sources, are exposed to each other in sunlight.

According to Anumita Roychowdhury, executive director, research and advocacy and head of CSE’s air pollution programme: “Delhi and the National Capital Region (NCR) are in the grip of multi-pollutant crisis. Even before the health risk from particulate matter could be addressed, deadly ozone has raised its ugly head in Delhi and NCR. Without a time-bound implementation strategy and preventive action, this can deepen into serious public health crisis. This will spare neither the rich nor the poor.”

The ozone data was analysed from February to May from four stations: R K Puram, Punjabi Bagh, Mandir Marg and Anand Vihar to understand ozone build-up during summer. 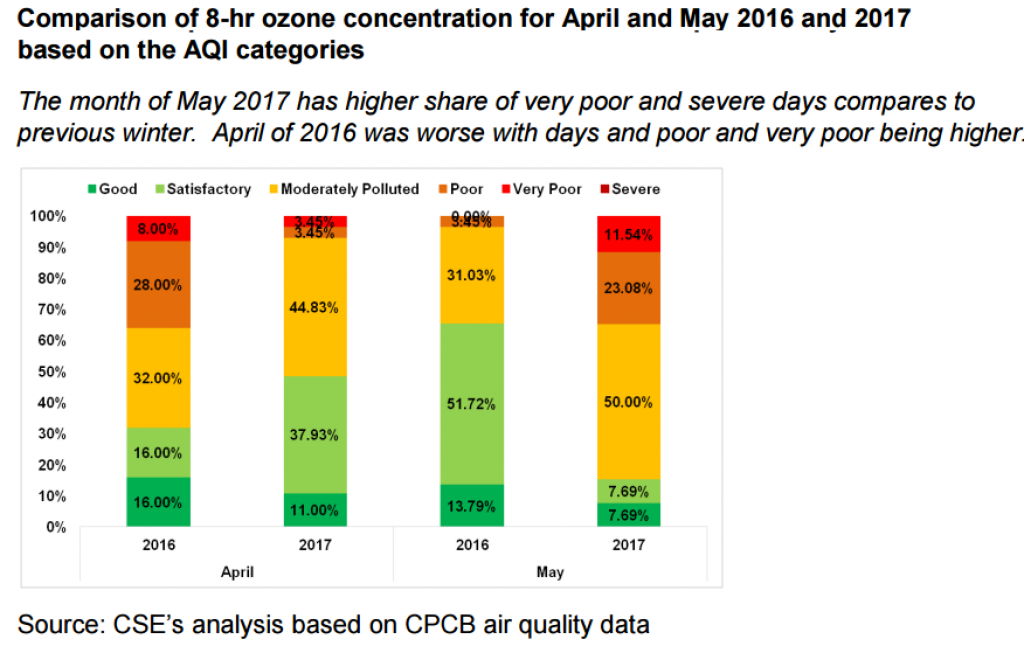 The level of ozone has doubled up quickly as the heat wave hit Delhi in May and the peak was three times higher than the standard. This is of serious concern as even short-term exposure to high ozone levels can cause great harm. This is one of the reasons why ozone standards are set for eight-hour average as well as one-hour average. 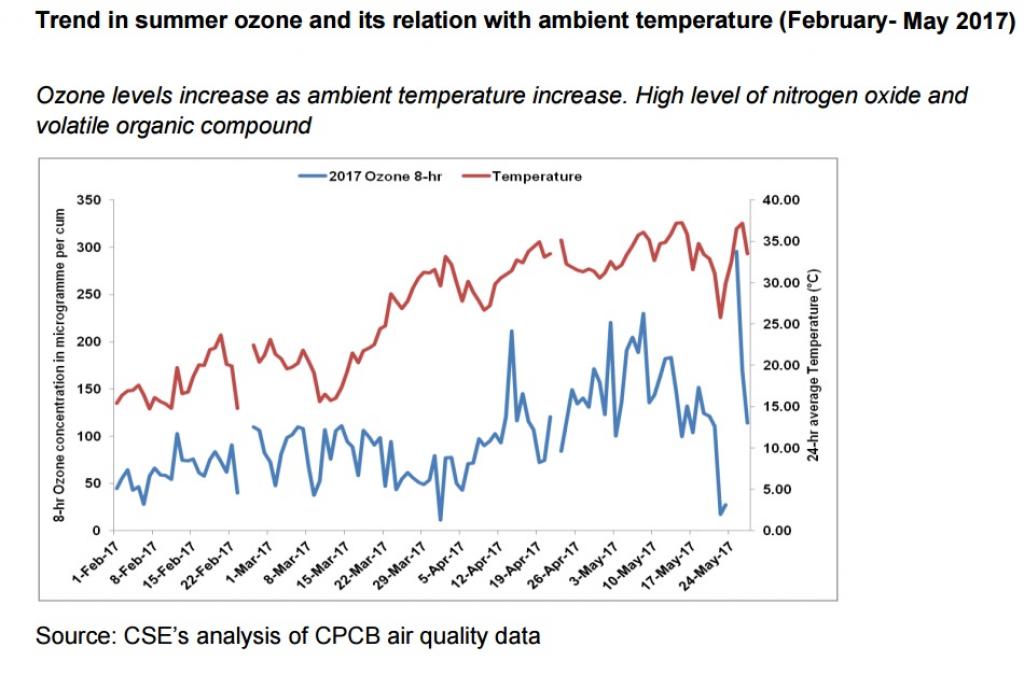 A similar trend is observed in May. When temperature rose from 32°C on May 3 to 36°C on May 8, the daytime ozone concentration increased by 130 per cent or 2.3 times from100 µg/m³ to 230µg/m³. This is ominous. With climate change and higher frequency of extreme weather events, such trends will put citizens at serious public health risk.

How serious is the problem in Delhi-NCR?

Residential neighbourhoods are more vulnerable: Micro-mapping of ozone levels across the city shows high vulnerability of residential areas. Residential areas of RK Puram and Punjabi Bagh have high ozone concentrations—much higher than the commercial and transport hub of Anand Vihar. This is a very serious health concern.

RK Puram experienced one of the highest concentrations of ozone—337µg/m³, which is more than three times the eight–hour standard. As much as 82 per cent of days in April and 100 per cent or all days in May have violated the safe standard.

Punjabi Bagh has experienced the highest eight-hour average concentration of ozone at 416 µg/m³-- more than four times the safe standard. As much as 78 per cent of days in April were violated. The data for May for this location was not available on the CPCB website.

In Anand Vihar, a commercial and a transport hub, the levels have gone up to twice the standard. About 17 per cent of days exceeded the safe standard in April followed by 68 per cent in May.

Ozone is becoming an NCR-wide problem

Ozone monitoring is very limited nationwide. Not all cities monitor ozone. Data available for NCR shows that while 67 per cent of days in Delhi during April and May of 2017 have violated the standards, 23 per cent of days in Gurugram, 62 per cent in Ghaziabad, and 35 per cent in Faridabad have also violated it. This is becoming a regional problem and demands regional action.

Why should we worry about ozone?

Early deaths due to ozone pollution are the highest in India: The new burden of disease study from Health Effect Institute (HEI) has shown that early deaths due to ozone have jumped by 148 per cent in India. Ozone aggravates respiratory problems, especially chronic obstructive pulmonary disease (COPD). The HEI scientists used the chemical transport model for estimating the ozone, but the evidence of increasing ozone levels in India, especially in north India, is seen from the available measurements.

According to scientists, formation of ozone is expected to be higher in countries in tropics and sub-tropics and near the equator. To some extent, rising temperature is also aggravating this trend.

India will be well-advised to take early and stringent steps to control ozone precursors which are very difficult to control. This means stringent control of gaseous emissions from combustion sources, including vehicles. Ozone precursors like nitrogen oxides, carbon monoxides and volatile organic compounds also have serious local public health impacts.

Ozone is an extremely harmful gas. Just a few hours of exposure to it can trigger serious health problems, especially among those who are already suffering from respiratory and asthmatic problems. Ozone worsens symptoms of asthma, leads to lung function impairment and damages lung tissues. Chest pain, coughing, nausea, headaches and chest congestion are common symptoms. It can even worsen heart disease, bronchitis and emphysema. It increases emergency hospital visits and admissions related to respiratory diseases.

A study by the University of Southern California, which was reported in Lancet, has found that in high-ozone areas the relative risk of developing asthma in children playing three or more sports was more compared to children playing no sports. Outdoor heavy exercise is not recommended. With every breath, athletes particularly take in 10 to 20 times more air, and thus pollutants, as compared to sedentary people.

Scientists inform that ozone is a powerful oxidiser, which means it can damage cells in a process akin to rusting. Children and the elderly are at special risk. There is a strong association between ozone and daily premature death counts. Those with pre-existing diseases and lung diseases are at serious risk. Growing concentrations of nitrogen oxide and volatile organic compounds from combustion sources, especially from the explosive increase in diesel vehicles, is adding to the deadly recipe of ozone in hot and extreme climate.

Also, ozone that gets created in the polluted environs of the city can also drift depending on the wind direction towards cleaner environs in rural periphery and begins to accumulate as it has less chances of reacting with other pollutants in cleaner environment. Hence, it builds up fast at the outskirts. It is known to damage crops.

Delhi and NCR need higher degree of health protection for all, especially the high-risk groups, including the elderly, children, outdoor workers and people with asthma and lung disease. Cost of inaction can be very high. Governments must have its implementation strategy for priority measures in place before the next winter: