If fossil fuel emissions go unchecked, there is a possibility of sulphur dioxide emissions increasing four-fold in India by 2020 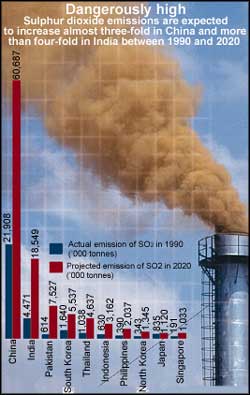 In asia as well, the situation is about to reach alarming proportions. Given the fact that the two most populous countries of the world -- China and India -- have substantial reserves of coal, the continent remains a region where coal use is expected to grow substantially in the coming decades. Fortunately, for India, the sulphur content of coal found in the country is consistently low. But this is not the case with China. There are several sources of anthropogenic sulphur dioxide emissions, including power generation and transport and even household energy use for cooking, using a variety of fuels. In fact, the Rains-Asia model, on which the iit scientists worked, indicates the possibility of a 315 per cent increase in so 2 emissions over present levels in India by the 2020.

They have reported that ecosystems exceeding the critical load will rise from zero to 15 per cent between 1990 and 2010. Otherwise, it could reach 50 per cent. According to Mohan and Kumar areas exceeding the critical load are mainly located in southeast Bihar, West Bengal and Delhi. Critical load is the maximum deposition of pollutants that will not damage the ecosystem. It is calculated on the basis of the ability of a system to buffer the acidity due to the supply of acidic compounds and varies from place to place.

A World Bank and Asian Development Bank-sponsored study in 1995 showed that areas in Asia with critical loads of up to 320 milligrammes per square metre per year are located in south China, southeast Thailand, Cambodia, and south Vietnam. A similar study by the funding bodies five years earlier had shown these areas to be located in southeast China, northeast India, Bangladesh, Thailand, parts of Indonesia, South Korea, southern Japan and small parts of the Philippines (see graph: Dangerously high ).

According to researchers at the Tata Energy Research Institute ( teri ), by the year 2020, the energy demand in India is expected to increase by 300 per cent from the present level. Their predictions for the same year for different countries of Asia region using the Rains-Asia model shows a grim picture. Many areas in the region will cross the critical loads of sulphur deposition. Except Pakistan, the western and central parts of India, western China, Myanmar and parts of Indonesia, the rest of the continent is expected to be severely affected. This means areas which will experience sulphur deposition levels far in excess of their critical loads include southern and eastern parts of China, parts of northern and central Thailand, the Korean peninsula and large portions of north and eastern India and specifically Delhi, Agra, Chembur, Trombay, Thane, Ghatko-par, Belapur, Nagpur, Pune, Korba, Singrauli, Kodaikanal and Port Blair. Kodaicanal falls into the sensitive pH zone and is prone to environmental degradations and even acid rain. In areas where there is vegetation like pines, the soil is acidic and more susceptible to degradation than areas with alkaline soil (see maps: Areas at risk and table: Fluctuating trends ).

In some industrial hotspots of China, the sulphur deposition levels on land are as high as 18 grammes per square metre per year, which is many times above the critical level. By 2020, virtually all of China's eastern part and large regions in India, including the capital of Delhi and nearby Agra will have to bear sulphur deposition levels between two and five grams per square metre, as per teri estimates.

John McCormick in his book Acid Earth says that coal-fired thermal power plants provide nearly 65 per cent of India's electricity. Although they use low-sulphur coal, the older plants are fitted with mechanical dust collectors that generally operate at about 70 per cent efficiency. Newer plants have electrostatic precipitators which can remove up to 99 per cent of dust if properly maintained. But breakdowns regularly lead to pollution. For example, a breakdown of precipitators in the Bhatinda power station in the Punjab in the early 1980s resul-ted in 1,200 tonnes of fly ash being emitted into the atmosphere every year. In 1982, India Today reported that the town of Bhatinda (which received no power itself from the plant) lay under 'a permanent blanket of smoke; fly ash coats every surface and a good deep breath is likely to wind up a racking cough'.

In The State of India's Environment: A Citizen's Report , the Delhi-based Centre for Science and Environment ( cse ) warned in 1983 that air pollution, "after engulfing the large cities of India... has begun to hurt the residents of small towns and once sleepy villages where thermal power stations and large industries are now being located." cse observed that while urban communities have pressure groups and officials to whom protests can be made, effective protest in villages can take longer to emerge.


The problems facing the Taj Mahal illustrate the threat to India's cultural heritage. In 1982, a major oil refinery was opened outside Mathura city, just 40 km from the Taj in Agra, and upwind from other monuments in Fatehpur-Sikri, Mathura and Brindavan. The refinery processes more than 6 million tonnes of crude oil annually.

According to John McCormick there were fears from the outset that the pollution caused by the refinery would slowly destroy the Taj, although government officials denied the possibility. An Italian consultancy firm brought in to advise on the environmental consequences of the refinery concluded that so 2 emissions would be insufficient to damage the structure, and that existing discolouration of marble and sandstone in monuments in the vicinity was due to algae and fungi rather than pollutants. While scientists, environmen-talists and politicians grope with how to tackle the latest threat to the environment, there are fears about the gradual destruction of the Taj Mahal. John McCormick has also expressed concern over this. However, a book written by Delhi-based journalist Anil Maheshwari created a furore in 1996.

Maheshwari attempted to put at rest fears of damage to the monument from numerous polluting industries in and around Agra. In his book, he says the accusation the structure has turned yellow because of acid rain, formed by the presence of sulphur dioxide in the atmosphere, is 'incorrect'. He adds that even if it is assumed that acid rain occurs in Agra, it can never turn marble yellow. Marble tends to turn whiter when it comes in contact with sulphuric acid, even though the surface turns rough and flaky, he contends.

Maheshwari further states that given Agra's power situation most of the time this equipment will run on diesel generators which will exacerbate the situation. In a chapter titled Yellow Fever , he says a senior government official in the department of culture had communicated to the Vardarajan committee on the issue that - structurally - the monument was in a sound state of preservation and studies had confirmed the same.

However, Agra's pollution level have not displayed an ability to remain static for long. Although data published by the Uttar Pradesh Pollution Control Board ( uppcb ) shows a decline in spm levels in the city between 1991 and 1994, it has steadily increased since. Emissions from 70,000 generators used as a result of daily power cuts, increasing number of three-wheelers running on diesel and emissions from the refinery continue to be major sources of high levels of spm .

The closure of 212 coal-based industrial units in 1993 and relocation of a thermal power plant are possible reasons for the decline in spm levels between 1991 and 1994. But the reason for the increase of pollution from 1994 to 1996 are not clear. The blame lies partially with the increased use of generators due to power shortages following relocation of the power plant (Refer to 'Death is in the air', Down To Earth , Vol 6, No 12).

A positive step to cut pollution levels was the Supreme Court's landmark decision which ordered the reduction of sulphur content in diesel sold in the Taj trapezium from 0.5 to 0.25 per cent. The region is a 10,400-sq km trapezium-shaped area covering the five districts of Agra.


As energy requirements in India will grow rapidly in tune with the economy, coal dependence is expected to increase threefold over the current level of consumption, making the clouds of acid rain heavier over many highly sensitive areas in the country - the northeast, parts of Bihar, Orissa, West Bengal and the southern coastal areas. Already the soils of these areas have a low p h value, which acid rain will aggravate making it infertile and unsuitable for agriculture (see box: Deep impact ).

The green India 2047 project of teri has estimated that India is already losing between 11 per cent and 26 per cent of agricultural output on account of soil degradation. Acid rain would increase this figure significantly. The prospect of increasing consumption of coal in Asia will add insult to injury.