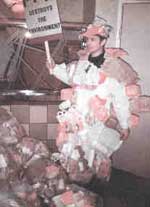 THE sun no longer shines on the fast-food industry these days. Kentucky Fried Chicken's maiden venture in India landed the us fast-food giant in a soup, with allegations of carcinogenic chicken being on its menu. And in the UK, McDonald's Corporation seems to have bitten off more than it can chew by filing a libel case against two British environmentalists who hit out against the company's malpractices.

The hearings for the libel trial brought by McDonald's against Helen Steel, 29, and Dave Morris, 4 1, the environmental activists, had begun on June 28, 1994. The trial is now in its 18th month, and is already the longest libel trial in British history. About a 100 witnesses have so far given evidence on a gamut of issues including the alleged promotion of unhealthy food by McDonald's, the wasteful packaging used, its cruelty to animals and alleged hostility to trade unions. Yet to come are the sections of the trial dealing with the company's destruction of rainforests in South America.

It all started in the late 1980s when radical environmental activists from London Greenpeace (not connected with the Greenpeace International) distributed six-page 'factsheets' entitled What's wrong with McDonald's. According to the leaflet, although McDonald's cultivated the image of a caring and green company, the reality was that "McDonald's only interest is money - making profits from whoever and whatever they can."

In the process - the factsheets alleged - the company destroyed rainforests; ruined people's health by promoting food high in fat, sugar and salt but low in fibre, vitamins and health; created mountains of waste by using unnecessary pack- aging; treated animals barbarically and exploited its staff. McDonald's was not amused. In September 1990, the burger giant slapped libel writs on five activists of London Greenpeace, stating the allegations to be untrue. Since under British law, no legal aid is available to fight libel actions, three of the five decided they did not stand much of a chance against the us $24 billion-a-year corporation and apologised to McDonald's. But Steel, a former gardener, and Morris, a laidoff postal worker, decided to take on the world's biggest fastfood chain by fighting the case themselves.

In a statement on the first anniversary of the trial, Steel and Morris said, "McDonald's hoped to use the libel laws to intimidate and silence its critics. Their efforts have backfired completely." indeed, the company's squeaky clean image is getting rather sullied. Over a million London Greenpeace 'factsheets' have been distributed in the UK alone since the trial began. And in the courtroom itself, McDonald's executives h made statements nothing short of embarassing.

The most sustained grilling so far has been over the cl that "Every time you eat McDonald's food, you'll eat gc nutritious food." This is from the'Nutritional Guide'availi in all McDonald's outlets. Edward Oakley, chief purchase officer and senior vice-president of McDonald's UK, was as in court just what he meant by 'nutritious'. "Foods that c tain nutrients," he replied, adding that Coca Cola could be called nutritious, since it contained nutrients and w good source of energy!

Stephen Gardner, a former assistant attorney genera Texas told the court about a major advertising campa launched by the burger company in the us in 1987. The c parry was forced to withdraw this campaign when the attor generals of Texas, California and New York found it decept explaining, "McDonald's food is, as a whole, not nutriti The intent of the current campaign is to deceive custorr into believing the opposite."

Earlier, one witness after another gave evidence on exa how nutritious and healthy McDonald's food was. Vert Wheelcox, a consultant with McDonald's, agreed that th was considerable evidence that obesity, heart disease, diabe high blood pressure and some forms of cancer are linked I diet high in saturated fat, sugar and sodium, and that it , "not sensible" to encourage such a diet. He then admitted I a typical McDonald's meal was high in all of these. 'S Barnard, president of the us Physicians' Committee Responsible Medicine, asserted, "McDonald's products ch ly contain significantly more fat than what government got lines and health authorities recommend." The court a heard about the possible health hazards of some of the tives used by McDonald's from Erik Millstone, an expert food additives (see table).

The company hasn't scored very highly on environmental awareness either, not even when the main topic of discussion tn the court was rubbish. Paul Preston, president, McDonald's LK, told the court, "If I fled a million people and they all bought a soft drink, I bet in the entire UK, we wouldn't find 150 cups as litter." In fact, as a manager of a McDonald's restaurant in London testified, the average customer leaves with no Ins than seven pieces of potential litter : a bag, napkin, straw, cup, cup lid, paper carton and stryofoam packaging; McDonald's serves a million customers every day in 580 stores across the country.

Preston also claimed in court that stryofoam packaging was less environmentally damaging than washable plates and t.uflery. In the us, however, following protests from campaigncrs, McDonald's has replaced stryofoam packaging with paper wraps. The non -biodegradable stryofoam poses serious disposal problems and uses ozone- unfriendly chlorofluorocarGourmet's terror bons in its manufacture. Further, the company's own toxicology expert accepted in court that styrene, a possible carcinopm, can migrate from the packaging into the foods.

But not everybody thinks dumping of waste could pose problems. Said Oakley, "I can see it to be a benefit. Otherwise, vou will end up with lots of vast, empty gravel pits all over the country."

The court is currently hearing evidence on the company's actitudes to unions and the work conditions of its staff The bg section of the trial, dealing with the destruction of rainiorests, is expected to begin in December 1995. McDonald's a-sclely acknowledged to one be the world's largest promoter of beef through its hamburgers. The company has often been accused of obtaining its beef from cattle grazed in areas that weTe once rainforests, especially in Brazil and Costa Rica, idkd only to cater to the growing demand for beef. Md)onald's denies the charges.

At the end of the trial, the judge, Justice Rodger Bell, will make a ruling on each separate issue. Meanwhile, the David vs Goliath battle carries on. In the process, Steel and Morris have become something o1folk heroes. The unorthodox court style of the McLibel 2, as the defendants have come to be known, has led to the trial becoming popular free entertainment in London. Regulars file into London's Royal Courts of Justice every day to watch the jean-clad duo take on the well-heeled top guns of McDonald's management from both sides of the Atlantic.

Says Steel, who has moved from her home in Yorkshire to London for the trial: "It's been a long ordeal. We've had no time for anything else." Adds Morris, a single parent of a fiveyear-old son, "I do all the work on the case after my son falls asleep. Then I work until I'm exhausted." The two have so far spent a little over E15,000 on the trial. A McLibel Support Campaign has sprung up to support the duo. The costs of the defence trial, including photcopying, research, air fares for witnesses from outside the UK and campaign publicity, are met entirely from donations from the public.

McDonald's spends an estimated E6,000 a day on the trial. With 14,000 outlets in 70 countries around the world, it is one of the most widely known brands in the world. But it has not been able to silence the protests welling up against it, neither in the UK, nor elsewhere.

In April this year, the McLibel 2 were flown over to Des Plaines, Illinois, USA, to join in anti-birthday events there, marking the opening of the first McDonald's store here 40 years ago. The day was also marked by protests in Germany, Finland, France, Norway, Spain and Switzerland. Earlier, 400 youths vandalised a McDonald's store in Copenhagen because, they said, "McDonald's symbolises capitalism and money.

World Food Day, October 16, saw further protests around the world. The day is also celebrated as the Day of Action against McDonald's. People in various countries handed out the What's wrong with McDonald's leaflets.