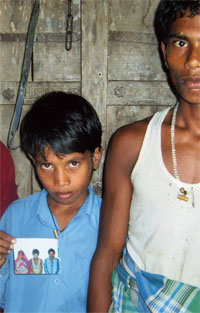 Nawagarh in Durg district of Chhattisgarh is a small place by all standards. As in all small places here too everyone knows everybody and it was not difficult to find a local journalist as soon as we reached Nawagarh. We were looking for help to investigate the story of a farmer’s suicide in Chhattisgarh. A simple enquiry at a local paan shop on the roadside got us the address and directions to the most famous journalist in town. Here journalists wear many hats. Ashish Jain runs a grocery shop apart from being a correspondent for a daily from Chhattisgarh’s capital Raipur. A big picture of him with a state Congress leader in his drawing room tells us that he is also active in local politics apart from journalism and his shop. While waiting for tea I asked him if there have been many incidents of farmers’ suicide in Nawagarh lately? “No, we have never heard of any farmer’s suicide here,” Ashish said very confidently. He was, in fact, quite surprised to hear my question. His brother, who is a correspondent for another daily from Raipur and was in the shop next door while we chatted in the drawing room, overheard our conversation and made a quick call to the police inspector of the town and confirmed that no farmers had committed suicide in the area. I took out a list provided by the police headquarters in Raipur and started counting. It had names and addre sses of 23 farmers who had committed suicide in the last 18 months under Nawagarh police station. So how far were the villages listed here? I wanted to know. Ashish had a close look at the list and said that all the villages in the list were within 4-5 km from Nawagarh. But he still would not believe us and was shocked to hear that according to data of the National Crime Records Bureau, Chhattisgarh has highest rate of farmers’ suicide per one lakh population in the country.

“I have never read about it anywhere in the newspapers,” he said. “The figure is not just for this year. Chhattisgarh remains at the top of the list every year since its inception. 1,593 farmers committed suicide in the state last year according to the data provided by state police to the National Crime Records Bureau,” I said. It means four farmers die every day by committing suicide and in the tally, Durg is just behind Raipur, which tops the list amongst the districts of Chhattisgarh. Two hundred and six farmers committed suicide in Durg last year alone. Ashish was bewildered. After taking directions from him, we set off to meet the families of some of the farmers from the police list who committed suicide last year. There was one farmer from Mohtara village, who as per the list had decided to put an end to his life because of a heavy loan. We thought of going to his family first. “Pardesi, who died?” Yes. “Go along the pond and knock at the last house to your left. That is Pardesi Sahu’s house,” people told us at the village square in Mohtara. Raju looks younger than the twenty years he claims his age to be. But he is the eldest in the house now. He needs to take care of sister Rajmati and younger brother Rajesh after father’s demise. His mother died a natural death six-seven years ago and his two elder sisters were married before that. Raju has no answer to why his father may have consumed poison. “May be he was unhappy with my mother’s death” he said. But that was six-seven years ago. “Maybe he was drinking too much,” he answered reluctantly. Sawat Sahu, an old friend of Pardesi joined us by this time and objected to this remark from Raju. “Yes, Pardesi used to drink when he met his friends of that type but he was definitely not a drunkard.” “How much loan did he have?” I asked. “It was around Rs 1 lakh,” Raju replied. Who was the loan from? “We have a Rs 10,000 loan from the bank and the rest was from relatives and friends.” Did they come to your house to ask for the money? “Yes, they used to come to our house asking for the money. But I have now returned most of the loans,” Raju said. “You have returned the loans, how?” I asked. “I sold 55 decimal of land after my father’s death to repay the loans to relatives. I have repaid Rs 60,000. But there is another 30,000 still to be paid to Padum Guruji in Jhal and one more relative in Semarsal.” “I have not paid the bank yet.” But I would have thought that being your relatives, you can return the money to them later, they would wait, and you would return the money to the bank first, I said. “No. I did not want the relationships to go sour. My father died in shame that he could not return their loan so that is the first thing I did after my father’s death,” Raju said. The story was becoming clearer now. Sawat Sahu sitting nearby pitched in: “Though Pardesi had 2 acres (0.8 hectares, ha) he used to take another 4-5 acres (about 2 ha) on lease every year. He thought he would repay the loans with income from the extra land but the crop failed.” Pardesi’s elder sister also joined in by now. “Many years ago we used to go out to work to other states and had bought this land with the help of that earning. It would have been better had my brother continued to go out to do labour and not insisted on farming. This farming has killed him. Pardesi had sold 2 acres (0.8 ha) earlier as well, to repay loans in the past. By this time he had only 2 acres (0.8 ha) left and could not bear the thought of having to sell them too,” she said. It was quite obvious that suicide is such a negative thing socially that people do not want to think about the reason a family member may have committed suicide. Or even if they think about it, they try to avoid discussing it with outsiders and it is difficult to get the story out as a journalist, unless one is prepared to be very persistent. We now moved to nearby Ranbod village, where Beturam Sahu committed suicide. He also had 2 acres (0.8 ha). His wife is sick and weak, and it is obvious that she has not been able to manage to put together enough money even for food. She lives with a small baby in their mud hut next to the village pond. Though the crop is yet to be harves - ted, this year the elder son Lakhnu has already left for Agra to earn some money by labour work. They have a loan of Rs 30,000 on them. “The crop is so bad this year that we will not even be able to save any seeds. There were no rains at all,” said Santosh, Lakhnu’s friend. “That’s why Lakhnu left even before harvesting the crop. There is nothing left to harvest in his land this time. It is all gone. He is worried how will he repay these loans.”