All the water they need

Rainwater harvesting is catching on in a big way in Kochi

All the water they need 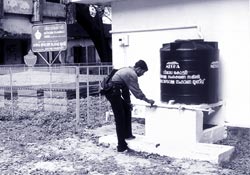 The coastal city of Kochi in Kerala might finally have some respite from acute water shortage. And the famous Maharaja's College in Kochi is leading the way. Kerala's largest rainwater harvesting project, with a capacity of 300,000 litres, was inaugurated in the college campus. Two abandoned tanks, earlier used for a gas plant by the chemistry department, will now provide the 6,000-student campus with enough water to meet all its needs.

This project could well be a new beginning. Kochi's 11 lakh residents need 91 million litres of water a day. The Kerala State Water Authority, however, provides only 68 million litres a day. Rainwater harvesting is the most viable solution in the monsoon-rich state of Kerala. The Maharaja College project was implemented by the Kochi Water Mission, which is a part of the Greater Cochin Drinking Water Protection Forum (gcdwpf). gcdwpf is a voluntary agency actively involved in the preservation and protection of drinking water in and around Kochi.

gcdwpf, established in October 1997, is working on newer ways to solve water scarcity in Kochi. The forum has already handed over 44 pure water units to the people. These units include rainwater harvesting projects, motorised and manual shallow tubewells and renovated open wells to meet the needs of the people.

The forum started functioning after west Kochi was hit by typhoid in 1997, almost reaching epidemic proportions. gcdwpf conducted awareness-building campaigns on health and hygiene and organised numerous medical camps. In response to a petition filed by the forum, the High Court of Kerala directed the government to replace 18,000 metres of broken water supply pipelines, which could cause contamination of drinking water. The forum has also started health clubs in some 10 schools in and around the city, and is planning to start 50 more in the coming year.

The rainwater harvesting project in Maharaja's College was partially carried out by volunteers of the college's National Service Scheme. The students cleaned the two abandoned tanks. Each of these tanks has a capacity of 175,000 litres. The forum took over the rest of the job. They strengthened the bottom of the tanks with concrete. The tanks were then connected together to be used as storage tanks. The upper parts of the storage tanks are closed, so that there is no contact with sunlight. This prevents the growth of weeds in the stored water.

gcdwpf identified a building, the Arabic department building, within the campus that has a terrace area of 1,000 square feet. This terrace area was then cleaned and covered with plastic sheets on the floor and the sides. The water that is collected in this area passes through pvc pipes that are about 10 millimetres in diameter into a concrete tank (eight cubic metre capacity), which contains carbon. The water is then passed on from the concrete tank to a tank filled with sand (about the same capacity as concrete tank). These tanks ensure that the water is filtered before it reaches the two tanks that were cleaned for storage of water.

The forum hopes that rainwater harvesting could help solve another problem. Kochi faces severe water-logging during rainy days. The poor drainage system has worsened the situation. Rainwater harvesting might be the ideal answer to water-logging as well. "Kochi is a coastal city, and the underground water is, therefore, largely saline. If we could use safe water for drinking, and find alternative sources for other uses, the available water will be enough for us," says V C James, president, gcdwpf. "The problem is that we are wasting a huge amount of pure water everyday in our bathrooms and kitchens. The rainwater harvesting system works very well in the coastal areas that have sandy soil. The water thus harvested can then be pumped out using handpumps," explains T E Thomas, general secretary, gcdwpf.