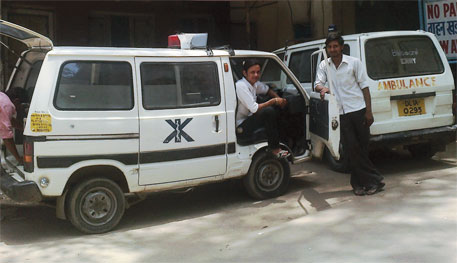 On May 30, 2012, Vikram, resident of a South Delhi village, died in a general hospital after waiting six hours for an ambulance. He was suffering from meningitis and had developed complications, requiring immediate attention of a super speciality hospital. His family could not afford a private ambulance and the government one never reached despite repeated calls. The family has since approached the Delhi High Court, seeking its intervention to ensure a responsive ambulance system in the city.

Though the matter is sub-judice, such incidents in the capital city are indicative enough of the dismal state of transportation for the ill across the country, particularly in the hinterlands. According to the National Rural Health Mission (NRHM), 6,226 ambulances are available with the government to cater to the country’s rural areas. This is half the required number of ambulances (see graph on p28). As per the WHO standards, there should be at least one ambulance per 100,000 population in the plains, and one for every 70,000 population in hilly terrain or tribal areas where population is scattered. The goal of an ambulance is to reach any place within 15-20 minutes after the distress call and transport the patient to a health facility within 20 minutes thereafter. “But this rarely happens,” says Yogesh Jain, co-founder of Jan Swasthaya Sahayog (JSS), a non-profit in Bilaspur. There is either shortage of ambulances or drivers to run them, he adds.

But not all patients require ambulance service. Studies show absence of public transportation is one of the reasons for failing healthcare system even in places where basic health infrastructure exists. In 2007, Unicef conducted a pilot study, called Maternal and Perinatal Death Inquiry and Response, in West Bengal’s Purulia district. The study found lack of transport was a major reason for high maternal mortality rate (MMR) in the region. People in the district needed to travel between 27 km and 197 km to avail healthcare, and a private ambulance would cost them anywhere between Rs 450 and Rs 4,500. This often discouraged people from approaching hospital. They would take four to five hours to just decide whether to seek care and arrange for transport. Such delay in reaching hospitals increased the severity of illness and chances of death. At least 62 per cent of expectant mothers in Purulia died in healthcare facilities and 12 per cent were declared dead on arrival, says the Unicef report.

NRHM, a programme of the Union health ministry to improve healthcare delivery across rural India, recognised transportation as an important component of healthcare delivery only a couple of years ago and started allocating funds for ambulance services to state governments. But the scheme is implemented only half-heartedly in several states due to lack of political will. In 2009-10, Rajasthan allocated Rs 30.9 crore for Dhanvantari Ambulance Service. An NRHM review report shows the government does not have details of the expenditure of Rs 23.26 crore. It could not even ascertain if the money was spent on purchase of ambulances or on operating them.

To make the system foolproof NRHM has launched a reimbursement scheme in October last year. Under the scheme, a patient receives Rs 300 for hiring a private transport in case of emergency. Public health experts say the amount is way less than what is spent by patients. Moreover, the scheme has limitations. It offers each public health centre (PHC) Rs 24,000 for reimbursing 80 patients a year. This means the scheme will benefit only seven patients per PHC a month. This is grossly inadequate considering high cases of maternal emergencies alone.

In the absence of an effective transport system, communities are resorting to drastic measures. In Maharashtra’s Nandurbar district people have devised a system called, bamboolance. They tie a sheet to both ends of a bamboo pole and carry the sick in it on their shoulders to the nearest hospital. But given the painstaking nature of bamboolance, only critically ill patients are carried to hospitals.

Elsewhere, civil society groups have come together to fill the void in healthcare delivery. In Chhattisgarh, JSS runs a bus service. “There is a complete breakdown of the public transport system in Bilaspur. Though there are some private bus operators, they provide arbitrary services,” says Jain. “Our buses ply between villages and nearby health centres. They pick up patients in the morning and drop them off in the evening, and charge just 40 paise per kilometre. Private taxi operators charge Rs 6-7 a km.” Jain says the number of patients visiting health centres has increased since the introduction of their bus service. But patients needing ambulance service still shell out large amounts of money. “After all a bus cannot be equated with an ambulance,” he says.

In several places, state governments have entered into public-private partnership (PPP) with non-profits for providing an ambulance service. One such non-profit is Deepak Foundation in Gujarat’s Baroda district.

“Initially, our aim was to create health awareness among pregnant women. But we soon realised they need a timely and economical transport to avail health care,” says Archana Joshi, director of Deepak Foundation. “Several government vehicles were lying unused, which could be used as ambulances. We wrote to the district administration. It gave us four vehicles under PPP, and Rs 1.5 lakh towards driver’s salary and petrol for a year,” Joshi adds. Transportation in these government vehicles-turned ambulances costs Rs 2 per km. The foundation keeps 10 per cent of its services free for patients below the poverty line. It has also established an emergency control room that receives calls for ambulances round the clock. “Though we started the service for expectant mothers, it is now open to all patients.” says Joshi.

“But why should people go to health centres? Why cannot they be brought to the people?” asks Sanjoy Hazarika, director at the Centre for North East Studies (C-NES), Jamia Millia Islamia University, Delhi. In 2005, C-NES started a boat clinic with basic amenities of a primary health centre in Assam’s riverine islands. Called char areas, the islands are formed as the Brahmaputra criss-crosses through the state. According to the 2001 census, more than 9 per cent of the state’s population lives on these islands. Yet there are only 52 PHCs for the 2,251 char area villages. In the absence of public transport system, people in many villages never availed healthcare. In the past five years C-NES has organised nearly 10,000 health camps, which were attended by 800,000 people. “Some villagers had come only to get a view of the doctor. For some it was the first time a doctor visited them,” notes a report by C-NES. The institute will soon launch a floating hospital, which will sail on the Brahamputra by next year. Built as a ship, it will bring advanced medical care, including general surgery, closer to home.

Rajasthan has also been experimenting with mobile medical units with the help of non-profits. Each unit has equipment for blood, urine and other tests, and diagnostic facilities such as X-ray and ECG. If the project gains acceptance, the government plans to launch two such units each in 20 desert and tribal districts and one each in 12 other districts on a PPP basis.

But such plans are limited to certain pockets. Jain says, instead of an ad hoc or arbitrary approach, the government should create a comprehensive model on the basis of tried and tested methods to tackle the problem of transport for patients. After all, public transport is the most important determinant for people to be able to access healthcare.