An army of mad trees

An army of mad trees 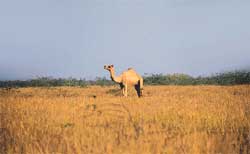 scientists call it Prosopis juliflora . The people of Kutch in Gujarat call it the gando bawal (the mad tree). Brought to India in 1877 by the British, it was introduced in the 1950s and the 1960s in Kutch to check the spread of the Little Rann of Kutch. Now, the problem is the thorny tree's unrestricted spread in the shrinking pastures. Scientists and conservationists are a divided lot: some say the tree is here to stay and should be allowed to run its course. Others say that further spread of the tree should be contained before irreparable damage is done.

It is a highly aggressive tree. It coppices well -- annual average growth has been recorded to be up to 3-5 metres. It thrives in difficult physical conditions, and Kutch provides them all: a hot, dry climate, mild winter, low rainfall and clear atmosphere. Due to its ability to strike root and flourish in highly degraded soil, it became the focus of afforestation activities in the country. The desire to show quick results led to thoughtless goals being set without considering the suitability of the sites. No wonder we have P juliflora in a bustard area in Abdasa taluka , ignoring the fundamental fact that a bustard does not need a forest cover. An area dominated by the thorny gando bawal is totally alien to its way of life, and it prefers open spaces with scattered bushes.

P juliflora started becoming gando bawal after it began spreading where it was not wanted. One such area is the 3,847-sq km Banni of Kutch on the edge of the Great Rann of Kutch, considered India's most extensive grassland. Though it has lost much of its greenery, the Banni still sustains a population of 30,000 milch cattle and 25,000 sheep and goats. Besides, camels from other places are sent to the people of Banni for grazing in the grassland. This works against the residents as their own cattle has to compete with these "guests' for whatever grass gando bawal has spared. On the other hand, livestock avoid the leaves of P juliflora , which seem to contain some toxic substance.

The tree causes further problems for cattle herders. Eating its seedpods can dislocate a cow's jaw, thus reducing grazing efficiency. As the tree has spread, the comparatively hardier buffaloes have replaced the once common and more productive cows of the Kankrej breed. The cows are very susceptible to wounds caused by the thorns of gando bawal , especially to their udders and hooves. And it is not just the animals that are affected. Given its fast rate of growth, endemic flora will be wiped out by P juliflora in the near future.

Also threatened by the mad tree are the traditional water storage systems, such as Virda , in the villages of Banni . The water table in these structures is going down, and fallen leaves and pods of P juliflora make water unfit for drinking. The well-developed root system of P juliflora is reported to have choked and damaged pipes supplying water to villages.

The spread of the mad tree is believed to be a significant factor contributing to the decline of many endangered grassland mammals, including the wild ass, the grey wolf, the desert fox and the chinkara . Prominent among birds found in Kutch are the houbara bustard, the lesser florican, the king vulture, the redheaded falcon. Large birds of prey, such as the tawny eagle, steppe eagle, imperial eagle and the short-toed eagle, are at a loss in a P juliflora -dominated scene. The dense thicket hardly gives room to these large birds to manoeuvre during chase, besides impairing their scanning ability.

But the mad tree is not without its uses. People collect pods, gum and honey from the tree to supplement their incomes in times of scarcity. It is also used for fuelwood and charcoal. Moreover, any large-scale removal of this problem plant will result in accelerated erosion of the topsoil -- P juliflora is one of the major species acting as a soil binder. In the absence of a healthy cover, the endemic vegetation will not be able to buffer the impact of high velocity surface winds that are common to the Banni . Instead of suggesting a widescale removal of P juliflora , which is impractical, it would be wise to keep it under check by demarcating areas for its removal. Applying soil conservation schemes, the cleared plots can be developed as grass plots for fodder production.

Inaction on this front could prove more costly than previously estimated. According to recent media reports that quoted data from Indian Remote Sensing satellites, the Banni was losing land to gando bawal at the rate of 2,673 hectares per year. Alarm bells are tolling loud and clear.