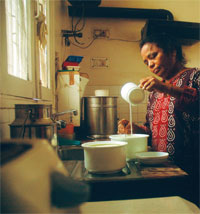 It is a trip Hardhal Singh Bist has made intermittently over the past two decades. Every time he ran out of starter culture to curdle milk, he would walk 150 metres to our house and request for a little. “Please give me some curd,” he would say. Bist mans the kitchen of our neighbours of three decades, the Channas. The last time Bist came calling was mid-April this year, after an unexpectedly large contingent of guests made the 51-year-old forget to preserve a little curd. Our neighbourly relations are cultured by a curd strain that goes back to the 1940s: to my great grandmother whose name I don’t know and my parents do not remember. In 1942, my grandmother got married in Lahore, now in Pakistan; the jaag or curd strain came in her dowry to Delhi, where my grandfather worked in the Indian Railways. Packed with her belongings was a muslin cloth her mother had given. It had been dipped in fresh curd to capture bacterial cultures, was dried and wrapped with care in paper. Her mother had a gift for making curd. “She would add an edible acidic substance to a bowl of milk and leave a silver spoon in the bowl,” Shanta Nagpal, my grandmother’s sister-in-law told me. “The milk curdled in due course.” At the age of 86, she does not recollect any other detail of her mother-in-law’s curd magic. The precise method died with my great grandmother in 1952. The curd strain, though, survived. Grandma to nanny Not having her mother’s skill and method, my grandmother went to great pains to preserve the curd strain. Each day, at least once, she would use it to curdle milk; some days twice. It was a daily ritual. From cleaning the bowl to placing it in the appropriate spot in the house to allow the curd to set undisturbed, to wrapping her old and frayed pashmina shawl around the bowl to provide the correct temperature. A quiet, reserved person, she barely left home; the only travels of hers I can recall are the annual trips to Shimla she made with my grandfather. In her absence, my mother handled the strain. In 1983, a week before I was born, my family hired a 25-year-old nanny, a woman who had run away from an abusive husband in Guntur. Her name is K Santosh; I have grown up calling her Amma. Though she had help, my grandmother retained ownership of the family’s curd setting ritual well into her old age. Only in 1994, when her health did not allow her to attend to household chores, did she pass the baton to Amma. By the time my grandmother died in 1997, Amma had assumed charge of the kitchen. Amma does not like to stray too far from home. In her 26 years in Delhi, she does not know the city beyond the neighbourhood. Just the kind of person to care for a curd strain like my grandmother did.

In the Punjabi kitchen, curd has occupied pride of place—and has continued to do so with changes in cuisine. From marinating meat to making base gravy for curries, from refreshing drinks to straight up with a little salt and pepper or jaggery. But the culture of maintaining starter culture is disappearing. I spoke to Dinesh Prasad, who runs the Mother Dairy depot in my locality. He remembers when curd lassi first began selling in tetrapacks. He could not recall when packaged yoghurt got introduced but is sure it is a big hit. “More and more people pick up a 100- gramme pack on their way to work or back,” he said. Sandeep Singh, owner of a nearby general store that sells packaged yoghurt, agreed traditions of making homemade yoghurt are waning. “My wife no longer sets yoghurt. She reminds me to bring home 200 grammes of the packaged stuff each day.” Working professionals who no longer live with their families have also settled for the packaged product. For Tania Walia, a friend, meticulous methods of yoghurt preparation are not worth the time. She recently shifted from her parent’s home in Noida, a suburb of Delhi, to the city centre. Her new address is a five-minute walk from a Mother Dairy depot, where she gets her daily fix of yoghurt. During a recent visit to her studio apartment with attached kitchenette, Tania told me that the packaged yoghurt is too sour and requires added sugar. “I miss my mother’s homemade yoghurt,” she said. Pia Mehra, owner of the popular chain of restaurants Punjabi By Nature, and my mother’s friend, is all for homemade yoghurt. Her restaurants set their own yoghurt, an essential ingredient for their best dishes. Their succulent mutton and chicken marinated in yoghurt are most popular, she says, as is their raita, whipped yoghurt seasoned with herbs and spices and has chopped onion, tomatoes and cucumber. “There is something gratifying about substituting packaged food with a product of your own,” she said. Labour of love Two households in our south Delhi neighbourhood borrowed the starter culture from us in the 1970s. They established a tradition of sharing. While Bist still maintains the starter culture, Seema Chandra who lives two houses down the street is no longer particular about homemade yoghurt. She developed a penchant for packaged Lebanese yoghurt during her decade-long stay in Muscat, Oman. As for me, my tastebuds are conditioned by my grandmother’s and Amma’s labour of love. Several times I have felt awkward looking at a measly bowl of yoghurt on the dinner table at a friend’s house. I have come to judge people’s hospitality by the way they serve curd. Ã”Ã»Ã¡