The Valencia water tribunal has stood strong for a thousand years; will modern-day pressures crush its influence? 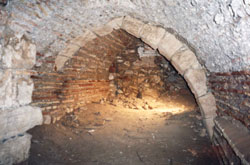 It's Thursday, and the bell of the Miguelete Tower, outside the Cathedral of Valencia in Spain, strikes twelve. Eight figures in black robes have assembled before Apostle's gate of the Cathedral, in a midday gathering reminiscent of mediaeval times. They are the sndicos (magistrates) at the weekly meeting of 'El Tribunal de las Aguas de la Vega de Valencia' (Water Tribunal of Valencia). This is one of the oldest law courts in Europe, one that still exists. The thousand-year-old water court is testimony to a system of communal irrigation that settles disputes over the use of water from channels of the river Turia irrigating 17,000 hectares of what is known as the 'Huerta (orchard) of Valencia'.

In fact, the system was so successful, nineteenth century British administrators studied its applicability to India. Says Thomas Glick, professor of history at Boston University, "British engineers were fascinated by the ability of Valencians to run a system equitably and efficiently. However, they were appalled by what they perceived as gross technical inadequacies. They did not understand that institutions too have a technical component." As a result, the idea of adopting the Valencian system was ultimately dropped. The primary interest of the British was to rule over natural resources, and adopting the Valencian system would empower local bodies to prevent just this.

Eight 'mother canals' traversing the huerta fall under the jurisdiction of the court. These canals are responsible for equitable distribution of the Turia's water. These larger squia -- the canals of Quart, Benacher and Faytanar, Mislata, Fabara and Robella on the right bank of the Turia; and the canals of Tormos, Mestalla and Rascaa on the left bank -- together with the smaller lateral channels, called sequioles, ensure that even the last field downstream gets the supply of water it requires. In the Valencian system, the rights to water are strictly bound to the land. No person has an individual claim to irrigation water, independent of the land s/he tills.

The origins of the court are unclear. It may have begun as informal meetings of the community's elders to discuss irrigation matters. There is some evidence that it grew into its present form around AD 960. Carlos Sanchis Ibor, a Spanish irrigation expert at the Universidad Politecnica de Valencia in Spain, says, "In the nineteenth century there was an attempt to formalise the court. In fact the name of the court 'Tribunal de las Aguas de la Vega de Valencia' was created when Francisco X Borrull, lawyer and landowner, tried to preserve the court from the modern state laws." The tribunal was finally accorded official status as a special tribunal under the terms of article 295 of the Law of Waters, 1866.

The court is only one element in a larger system of self-governance among Valencian farmers (see box: Self control). Irrigators around each canal form an irrigation community. The eight canal communities together form the tribunal, which in addition to its local duties, also voices the needs of the huerta to officials in Madrid. Its task of distributing water is made easy by an elaborate system of control structures in the canals and their laterals, which apportion water to the various irrigation fields. The system's efficiency is especially apparent in periods of drought.

Even so, there are occasions when disputes arise, especially in the dry season, and typically, these are upstream-downstream disputes. On such occasions, the complaints are taken to the canal's sndico -- each sndico has executive power over one mother canal, and is elected by the farmers whose land is served by that canal. In fact, the sndico must be someone who tills the land, not just a resident or a landowner. The court doesn't have specific rules for judgment, but applies the rules of the appropriate irrigation canal. Once convicted, the farmer pays a symbolic fine -- the amounts haven't changed from the figures fixed centuries ago. More significantly, though, the convicted farmer is responsible for repairing any damages. It is the responsibility of the sndico of the canal to ensure that corrective action is taken. Say, for example, the sndico may turn off a farmer's water, or take property as payment. However, there has been no occasion for use of this power in recent times.

An accused farmer can opt to be tried at an ordinary court rather than the tribunal, but this alternative is hardly used. Rarely has the accused failed to appear in court. This is not surprising, considering the number of advantages that the tribunal offers. There is no fee to the court, as the sndicos perform an honorary service. The proceedings are oral and informal, and each person represents herself/himself in court. The judgment is instantaneous, and most importantly, those making the judgment are persons who till the land themselves. The court, therefore, understands the problems and situations particular to the huerta of Valencia.

Despite its efficacy, the tribunal is today threatened by modern developments. The construction of dams on the river Turia since the 1960s has ensured uninterrupted supply of water. Hence, there are fewer regulations on equitable sharing of water, and the tribunal has seen very few cases in recent years. Ibor has visited the tribunal four or five times in the last five years, and has seen only one judgment, against a man who stole water from his neighbour. He sounds a bit dispirited, "Most of the time there are no disputes to judge. In fact, today, the court seems to survive as a symbol of the region rather than a real court."

This could well be an indication that traditional irrigation in the Valencian community is in danger. There are few full time farmers. To find someone who qualifies as a sndico is not easy anymore -- many farmers have an alternate occupation. Those that do till the land are less inclined to contribute towards the maintenance of canals; they favour laying underground pipes. Dying traditions aside, the underground pipes are harder to regulate and easier to misuse. Says Ibor, "They (the farmers) periodically demand state funds to construct pipes, and the regional government finances these works in order to get their sympathy -- and votes!"

The huerta of Valencia is shrinking, its lands are being taken over by an expanding urban sprawl. Luis Pablo Martinez, who is currently preparing a dossier on the tribunal for the United Nations Educational, Scientific and Cultural Organisation (unesco), perceives this as a significant problem: "Underground piping is a real danger for the preservation of traditional irrigation in many areas. But the main threat in the huerta is the spectacular growth of the city of Valencia and surrounding towns, and the accompanying increase in public infrastructure."

Sanchis Ibor echoes this fear, "The main threat to farming areas is the city's roads and buildings. In fact, one of the main canals represented in the court -- the squia de Mestalla -- covers less than 150 ha, and it will lose 50 ha more during the next five years." Despite these problems, the tribunal survives. Says Martinez, "The tribunal continues to be effective in implementing justice among the few huerta peasants that have disputes, because it is still a highly respected institution." And not just in the huerta. In December 1997, at the Foundation Valencia iii Millennium celebration, a group of experts headed by eminent agricultural scientist, M S Swaminathan, proposed establishing a 'Valencia International Water Manage-ment Centre' to resolve international conflicts over water. The ancient tribunal continues to be an inspiration.