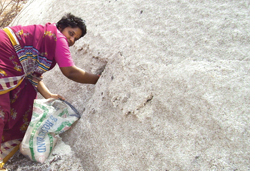 "Why shouldn't salt-making be classed as agriculture?" asks R Potharaju. "Both require land, water and sunshine, and are subject to vagaries of nature," he reasons. Potharaju is convenor of the Prakasam District Salt Farmers Forum.

The forum believes that an official categorisation as agriculture would take care of the many perils of salt-making. It will bring the 6,000-odd salt-maker families in Andhra Pradesh's Prakasam district under the ambit of agricultural insurance, give them access to institutional credit and guarantee a minimum support price to their produce.

Many of the problems of salt-making came to light after the December 2004 tsunami. After the calamity, workers of the ngo Social Activities for Rural Development Society (sards) found that relief agencies were working largely among fishing and farming communities; the salt-makers remained a neglected lot.Suneel Kumar Ravi, the executive secretary of sards says, "The tsunami struck when it was off-season for salt- makers, but they suffered tremendous losses, nevertheless. Stored salt was washed away and there was damage to infrastructural facilities like bunds, canals, drying pans, storage platforms and access roads. Work in the pans was held up for almost an entire season as the farmers struggled to repair these structures without any aid."

Ravi says that the salt-makers' demands have not been voiced in a concerted manner because the group has rarely been organised politically. Salt-making is practised in sparse pockets along the Andhra coast by an amorphous group comprising dalits, adivasis and other communities. "There has been little communication among the different communities," Ravi says. Matters are, however, changing after the formation of the Prakasam District Salt Farmers Forum in 2005
The forum believes that the salt-makers' problems start with the very basic requirement of their calling--land. More than 90 per cent of the Andhra Pradesh's salt-makers are small landholders they have less than 1.5 acres (0.6 hectares, ha).

The legal status of these lands vary. In central government holdings in Prakasam district large tracts have been leased out to big players, who in turn illegally sub-lease or actually 'sell' lands piece-meal to actual salt-makers. A case in point is Ullapalem village in the Singarayakonda mandala here all the 80-odd salt-making families operate on land 'sold' to them by lease-holders.

N Venkatarao, of this village, purchased an acre (0.4 ha) from a leaseholder for Rs 65,000 four years back. But he has no papers to prove the 'deed'. "We know that such transactions have no legal standing," he says. "But then we have no option. All salt lands in the village have been leased in advance, and if you don't have land of your own, there is no option but to work as a coolie on other people's salt farms," he rues.

"The leaseholder pay around Rs 8,000 for 20 years to the government," says P V R Raghavalu, another farmer in the district. "But they sell these lands to us at several times the price."

The situation is a little less precarious in Andhra government-owned land. The pans here have been leased to salt cooperatives which in turn distribute the land to their members. But there is insecurity even here. Potharaju says that in his village, Pakala, "105 salt-makers have leases dating 27 years back. These should have been renewed seven years back, but neither we nor anyone at the salt department knows where the original lease papers are. The government can ask us to vacate the land anytime or allot it to a big company as in Chinganjam and Krishnapatnam" (see boxes Last salt days and Snow white peril).

In some places in Prakasam, the state government has issued what the local people call "d k patta". This gives the salt-makers permanent right to land but not the right to alienate it. But getting these deeds hasn't been easy. In Kothapatnam mandala, for instance, the Salt Manufacturers Cooperative Society had to agitate for 10-years before its members were issued d k pattas last year. Kuntori Sheshamma, a salt-maker from Kothapatnam, says, "Our cooperative has begun communicating with institutions for credit after we got the pattas. Something should materialise by January, 2008 when the next salt-making season begins."


In the absence of institutional credit, the salt-makers have to depend on salt traders and leaseholders for credit. This comes at exorbitant rates ranging from 50 per cent to 80 per cent per annum.

But credit is an absolute necessity for the farmers. Salt-making is labour-intensive work, which requires ready cash at the beginning of the session when workers have to be mobilised to stamp the land to a required hardness and smoothness.

Around 50 labourers are required for an acre in a good season--when there are no rains. "And when there are rains, we require more labour, raising stamping costs exponentially," says Pattapu Elisamma of Binginapalli village.

Moreover, unlike their fellow workers in Tamil Nadu and Gujarat, salt-makers in Andhra do not operate in backwaters. They have to pump brackish groundwater with expensive diesel pumps, increasing their dependence on credit--and in turn on salt traders.

Such dependence skews the salt-economy totally in favour of the traders. They dictate prices and manipulate weight. A Sambi Reddy, of Kokkal village in Chinganjam mandala, says, "The traders pay Rs 25 for a 50-kg bag of industrial salt in peak season. But they do not allow us to install weighing machines. Instead, we are given bags, which are said to hold 50-kg of salt. But when filled, they weigh around 75 kg." In Ullapalem village, where farmers produce salt of edible quality, they are paid Rs 40 for a bagful which is said to weigh 70 kg. "But actually, it weighs no less than 85 kg," says Raghavalu.

The returns from salt-making are low. A 0.14 ha holding, the smallest for salt-makers in the state, requires an investment of around Rs 14,000 per season, the gross returns come to around Rs 30,000. "At the end of season, we count ourselves lucky, if there is Rs 2,000 in our hands."

"To break this vicious circle we need land pattas and farming status," says Potharaju. "Besides credit, we would be eligible for free power which the state government provides agriculturists. Our status as agriculturists would give us leverage in pressing for proper weighing, grading and market facilities." While the salt farmers' forum has not as yet fixed a figure for minimum support price, the farmers believe that Rs 40 and Rs 70 for 50-kg bags of industrial and edible salt, respectively, will be fair remuneration.


According to a report by the Salt Farmers Forum, the cash relief provided by the government after the tsunami in the four coastal districts of Prakasam, Nellore, East Godavari and Krishna was just Rs 800 per acre, whereas the actual damage was to the tune of a minimum of Rs 8,000 per acre.

"Salt is a highly vulnerable commodity, at times more so than crops," says Potharaju. "Even light rain can causes a loss of several bags. We need proper and accurate damage-assessment mechanisms apart from insurance for our infrastructural facilities, and salt stocks, on the lines of crop insurance."

Salt-making is an onerous task in other ways as well.It involves constant toil under the hot sun which poses health problems. The lack of drinking water facilities close to salt pans exacerbates the situation as workers can carry just one or two bottles of water, while the actual requirement is much more. One salt worker says, "Constant exposure to sun and salt affects women more. At times the heat can also cause abortions."

Other health problems include damage to the eyes due to the reflection from salt, and splitting of the skin in the feet. The Salt Workers Forum has demanded potable water facilities near the pans and protective gear for workers--dark glasses and suitable footwear. They have also asked for free medical facilities and medical insurance for salt workers, both the pan-owners and the labourers.


The only legislation pertaining to salt manufacturing in the country is the Salt Cess Act, 1953. The act talks about using the amount collected through this for the welfare of salt-makers. But then not much is generated through this tax anyway. Andhra Pradesh, for example, collects a meager Rs 7 lakh as salt cess every year. The benefits of legislations like the Minimum Wages Act, 1948 and the Bonus Act, 1965 have also not reached the salt workers.

The salt-makers' forum has called for comprehensive legislation on salt. According to Y Ramakrishna of sards, "Such a policy must include provisions for issuing ownership deeds for land, crop and infrastructure loan and subsidy provisions for small and marginal salt-makers, disaster response plans, minimum wages and grievance mechanism for workers, lean season employment opportunities and welfare schemes."

"Salt is one of the most basic essentials of life, next only to food, water and air," says P Sarada, co-convenor of the salt farmers' forum. "But those who make this necessary commodity are badly neglected in this country. What we need most is recognition from policy makers," he adds.