Angkor Wat city that lived and died by the environment

Angkor Wat city that lived and died by the environment

The famous temple site of Angkor Wat was once much more than that. A new map shows that the magnificent temples were part of a huge urban sprawl, with an extensive rural hinterland. People here created an elaborate system of reservoirs and canals--for irrigation, trade and travel--that began to silt up as the population grew, and perhaps saw failures that resulted in flooding and water shortages. But at its peak, the agglomeration was the largest of its kind in the pre-industrial world, according to a team of archaeologists working at this ancient Cambodian site.

The Greater Angkor Project (gap), led by a team of Australian, Cambodian and French archaeologists, has used remote sensing satellite imagery by nasa to uncover what lay hidden under vegetation at Angkor Wat.By detecting slight variations in vegetation and ground moisture due to underlying ruins, the satellite images reveal Angkor's urban sprawl in unprecedented detail. The archaeologist say the map "displays the ancient Cambodian site as an inhabited space not a scattered collection of discrete temples, but an integrated, interdependent rural and urban residential network, larger than anything discovered in the ancient world so far." The findings were published in the August 14th issue of the Proceedings of the National Academy of Sciences.
Angkor was the capital of the Khmer Empire, which held sway over modern Cambodia between the 9th and 14th centuries. In 1866, French explorer Henri Mouhot alerted the Western world to the ruins of a temple complex in Angkor. The place had been visited by Europeans before but Mouhot's posthumously published Travels in Siam, Cambodia and Laos is believed to have been influential in arousing European interest in the site. Scholars following in the Frenchman's footsteps were so overwhelmed by the artworks and architecture, that they ignored the archaeology. Angkor was believed to be around 40 sq km.

But gap archaeologists say the city state was actually "stretched for at least 1,000 sq km". They say that the closest pre-modern equivalent to the Cambodian city state was the Mayan city of Tikal in Guatemala, at its peak around 150 sq km.

"There is not a single square kilometre in Angkor that wasn't intensively modified and engineered," says Damian Evans, a gap archaeologist. Besides reservoirs and residential clusters, the map reveals 74 new temples and an elaborate grid of walled field systems.

Evans says there has been an ongoing debate about whether the water network of Angkor could have supported intensive rice cultivation. "The elaborate inlets and outlets on all the major reservoirs coupled with distributor canals connected to every single water source in the region suggest water was intensively exploited at Angkor and could well have been used for rice agriculture. The canals were either made of stone or compacted earth and there was a series of very sophisticated water control devices such as spillways--sometimes massive structures built in stone--which have the capacity to provide irrigation for rice," he writes.
gap findings confirm a theory, first put forward in 1955 by Bernard-Philippe Groslier. The French archaeologist had argued that the ancient irrigation network, which had been ignored by researchers who followed in Mouhot's footsteps, "was both built and used for irrigation, specifically, to ameliorate variations in agricultural output caused by an unpredictable annual monsoon and to support a huge population of greater than a million people in a constellation of suburbs". 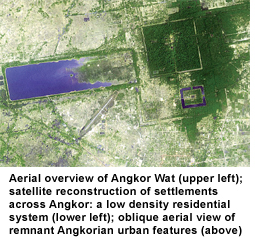 Evans, however, is not so sure of Angkor's population. "The gap study doesn't provide any direct evidence of an extremely large urban population. Our study is more revealing about the spatial extent of the settlement than about its population," he says.


Population figures aside, the expansion of Angkor is impressive and bears witness to the extent the Khmers were able to alter their environment, ultimately engineering Angkor Wat's demise. It was earlier believed that the city state was deserted after Thai armies ransacked it.

But the gap research has a given a different perspective to the city's fall. Evans explains that the "massive infrastructural network of roads and canals was built to give coherence to the extended settlement area and to provide a means of communication and of transporting vast amounts of people, stone, and other goods across the landscape". However the system might have been difficult to maintain especially with potential competing interests for water control (temples, domestic an agricultural use).

Groslier had already suggested that over-intensive irrigation and land-use led to the city's decline. "Excavations conducted during the mapping did reveal a series of ad hoc adaptations, breaches, modifications to the irrigation system suggesting systemic problems in the network could indeed have caused the downfall of the Angkorian state," Evans notes.

Furthermore, water-intensive rice agriculture required forest clearing and walled fields, which increased risks of runoffs, sedimentation and caused erratic water flows. In fact remote sensing and ground observations have revealed that "the Siem Reap river is now incised 5-8 metres into the Angkorian floodplain, and a major canal in the south of Angkor that postdates the 14th century ad (when the city was abandoned) is entirely filled with cross-bedded sands, indicating rapid movement of large quantities of sediment-laden water."

But what led to Angkor's collapse in the 14th century? Evans admits, "We don't know that at this stage. There is too little data on both population and on climatic variation in this area".

What the gap archaeologists do know though is that expansion of the settlement created increasing difficulties for the movement of people, information and goods around the landscape.

gap's current goal is to ascertain if Angkorians were able to deal with the environmental consequences of their settlement if their failure to factor in ecological changes lead to their downfall. Evans says that the increased sedimentation in canals due to deforestation caused by rice cultivation cannot be ruled out.

The archaeologist notes that Angkor's demise is a lot similar to the collapse of many pre-industrial civilisations. "It's something to bear in mind, considering that many of our contemporary cities are expansive, low-density urban sprawls as Angkor appears to have been," he says. Controlling the environment helped Angkor become the great political centre it was but also led to it losing that place.