Like Kerala’s Kasaragod, neighbouring Dakshina Kannada is bearing the brunt of spraying of endosulfan. While Kasaragod grabbed media spotlight and Kerala banned the pesticide, victims in Karnataka are still struggling for recognition

Karnataka chief minister B S Yeddyurappa in December announced that his government would consider banning endosulfan. The highly toxic pesticide is banned in over 70 countries.

The assurance has come too late and is too little for the hundreds of people in Dakshina Kannada district, like Santosh Menzes, who are suffering from two decades of aerial spraying of endosulfan. When this correspondent visited Menzes’ house in Kokkada village, the 20-year-old had tuned in for the test cricket between India and South Africa. He is a big fan of Virendra Sehwag. Bedridden since he was a year old, Menzes communicates with a grunt at the mention of cricket and grunts even louder if one does not root for India. Gracy D’Souza was pregnant with Menzes when endosulfan spraying was going on in cashew plantations surrounding her village.

Kokkada, Patrame and Nidle villages in Belthangady taluk are the worst hit. The plantations, owned by the government-run Karnataka Cashew Development Corporation, cover 850 ha in Belthangady. Spraying stopped in 2001 after the National Research Centre for Cashew, now renamed Directorate of Cashew Research, withdrew the recommendation for endosulfan. But the villages continue to bear the brunt of the pesticide. 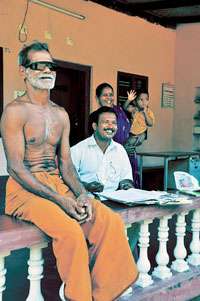 “Yeddyurappa’s announcement shows the government has at least started talking about endosulfan as a problem,” said Sridhar Gowda, a former teacher and activist in Kokkada. In February 2010, on insistence of Shobha Karandlaje, MLA from Yeshwanthpur, the state government for the first time ordered a survey. It identified 231 people from Belthangady and neighbouring Puttur taluk as endosulfan victims. Later that month the chief minister visited the area and distributed compensation and pension to the victims. He also announced Rs 25 lakh for setting up a rehabilitation centre for endosulfan victims within a week.

It has been 11 months and the rehabilitation centre is still on paper. “Even the survey was flawed,” said Gowda. It was done in three days and recognised people only with physical deformities as victims. Many endosulfan victims suffer from cancer, skin diseases, mental retardation and infertility, Gowda said.

A survey done by the district magistrate in 2004 following an order by the then President A P J Abdul Kalam showed 251 people were affected by endosulfan in Kokkada alone. The survey had identified another 180 victims in Patrame and Nidle villages.

The President’s order was in response to a postcard campaign initiated by Gowda. In 2001 he formed a committee with two other residents of Kokkada to fight for the rights of endosulfan victims. They withdrew because of ill health. Gowda led the movement despite being visually impaired. “As children, my siblings and I would rush to see helicopters flying over our village spraying endosulfan,” recalled the 32-year-old.

The helipad was 200 metres from his house. “I started losing my eyesight when I was in my teens. By 1992, I lost vision in the right eye and went blind within a few years. Now, after a couple of operations, I have regained 20 per cent of vision in one eye,” he added.

Gowda’s brother suffers from depression and sister was recently detected with tumour in the uterus. His father, in his 60s, has also lost his vision. To identify the exact number of endosulfan sufferers, Gowda said, the government should do a scientific study on the lines of the one in neighbouring Kasaragod district of Kerala. In 2001 the National Institute for Occupational Health had examined samples of blood, water and soil in Kasaragod to ascertain the impact of endosulfan on people’s health.

“It has been 10 years since endosulfan spraying stopped in the region. So a blood test may not give the right information,” said Ravish Thunga, consultant psychiatrist at Kasturba Medical College in Mangalore. A biopsy of organs like liver and kidneys or an analysis of bone marrow would help prove the link, Thunga said.

Muralidhar, a doctor who runs Ashwini Hospital, a nursing home in Puttur, said, “Even if one can’t prove endosulfan as a causative factor, one can’t disprove it either. How can one explain so many patients with similar conditions in a small area?” Muralidhar and his gynaecologist wife, Sudha, have been working in the district for almost 20 years. In the years when the spray was on, Muralidhar recalled, patients with unexplained throat, breast and uterus cancers, fever, miscarriages, allergies and joint pain used to visit the hospital.

After the spraying stopped the number of patients with cancer and miscarriages has came down. But there is an increase in the number of children born with congenital deformities like Down’s syndrome. Endosulfan is a genotoxin, meaning it alters the genes, he added. Christine Martis, a primary school teacher in Kokkada village, supports Muralidhar’s observation. “In the past few years, I feel most children in the school have below average intelligence and the dropout rate has gone up. Half of them are always ill,” she said.

There is no speciality hospital in the entire taluk. The rehabilitation centre promised by the government would have been of help, said Umavati of Patrame. Her six year old daughter, Vijita, can neither speak nor is she able to walk. She was healthy till she was about three. Then she came down with fever. Fits followed, her legs became weak and she lost spe ech. For a few years Umavati took her to Kasturba Medical College, 70 km away. “It was impossible to carry her for long distance on a hilly terrain. We now take her to an ayurvedic doctor in the village,” she added.

A RTI reply from Karnataka Cashew Development Corporation reveals the amount of endosulfan sprayed between 1980-2000 in Belthangady and Puttur taluk- 20 villages affected in all.

Vijita’s house is near a stream where plantation workers used to clean endosulfan containers, her uncle Koragappa Naik recalled. They even dumped some of the pesticide there after the corporation stopped endosulfan spraying. Fish and animals drinking from the stream had died, Naik said. Mohandas Gowda, an ayurvedic practitioner in Patrame, said initially plantation officials advised covering wells and shutting schools during spraying. But they stopped issuing the advice after 1990. Almost all wells in the area might have been rendered poisonous, he added.

Asked about the allegations, R S Suresh, managing director of the corporation, refused to comment. He passed the buck to the Central Insecticides Board for not keeping a check on pesticides like endosulfan that are listed “for restricted use in India” and research organisations that recommend pesticides.

The corporation merely follows the recommendations for good crop, said Suresh, admitting that it has no checks in place to see which pesticides the plantation contractors use and how. M G Bhat, director of the Directorate of Cashew Research, Puttur, said, “Since no study was done on the impact of endosulfan, we can’t say if it is safe or unsafe.” He recommends a medical study.

The directorate now recommends two other pesticides, lambda cyhalothrin (Karate) and carbaryl (Sevin). Sevin is a known carcinogen and can affect reproductive system. Officials at the directorate said unless its harmful effect is proven, its use should not be restricted.