Bacteria feed on pollutants in sewage, kill odour, but are they a complete solution?

Uttar pradesh chief minister Mayawati reportedly complained recently of foul odour from an open drain with sewage near her Kautilya Marg residence in New Delhi. There was no formal complaint, just her word. The New Delhi Municipal Council had to act. On November 14, at Rs 8.5 lakh annually, it set in motion a remedy: a tank that releases microbes to treat sewage.

One part microbes is added to 40 parts of untreated groundwater in the tank and the solution is released into the drain.

The wastewater in the drain is now visibly cleaner, and without the foul smell. The drain requires two-and-a-half litres of the potion everyday, at Rs 600 a litre.

Called bioremediation, this is the microbiological approach to treat sewage. The microbes accelerate decomposition of organic matter, doing in weeks what nature would in decades.

Companies and municipalities that have tried this method claim advantages over existing systems, involving treatment plants. These need money, electricity and land, which are a cause for concern, said Suresh Rohilla, head of the Living Ganga Programme of wwf -India.

The microbial technology takes very little time to set up and does not usually require civil works, electricity or skilled labour. With over 100 bioremediation pilot projects completed in India, the technology must be standardized, said Rohilla. Besides, sewage treatment plants have failed to check discharge of untreated waste into water bodies, he added. Bioremediation proponents therefore see bacterial strains’ role in cleaning the Ganga on which the Centre has spent over Rs 3,000 crore so far, with very little result.

More than 3,000 million litres of untreated sewage is discharged daily in the Ganga basin, said Mamata Tomar, director of J M Enviro, a company that has completed over 60 pilot projects over the past five years in India. She deducted the amount that can be treated in existing plants from the total amount of sewage in the basin, and arrived at the figure. If this amount were treated with their patented pool of microbes, it could save more than Rs 100 crore annually that otherwise would be used to operate treatment plants, the company claimed.

The government though is undecided on the methods to control pollution. “Bioremediation will have a definite role in future,” said R C Trivedi, former deputy director of the Central Pollution Control Board. “Because land is at a premium now.” This would require that the Centre sanction it.

Then there is the small matter of federalism. Water supply and sanitation is a state subject; municipalities control it. The Centre's role is advisory. Besides, bioremediation is an unproven technology, said Sankaranarayanan. "We believe it is a temporary solution."

He is not the only one who is sceptical. "I first heard of these claims in the late 1970s and we had some trials in Thames Water," said David Johnstone, then general manager of the water company in the UK. Their experiments concluded there was little or no improvement and that it was an easy way to throw money down the drain.

Ompanies offering bioremediation solutions exchanged notes with scientists at a recent conference organised by WWF India in patnership with the Indian Institute of Technology at Kanpur. “Our aim was to have an academic debate and find ways to standardize the use of the technology, ensure competition and transparency in costing,” said Vinod Tare, professor at the institute. This did not happen, he said, because the companies could not look beyond narrow commercial interests.

The institute, in an experiment on bioremediation, found the results were unreliable. A lot depended on the temperature, pH, retention time, flow rate and changing characteristics of raw sewage. “Let’s not confuse pollution control and abatement. Existing technology can be used to clean controlled systems such as lakes but not rivers,” said S R Wate, deputy director of the National Environment Engineering and Research Institute in Nagpur.

Tomar disagreed: “We work out a daily dose. Fresh pollutants in a stream are dealt with a fresh batch of microbes. We can also construct concrete structures such as check dams to increase the retention time of drains, which have a high flow rate.” 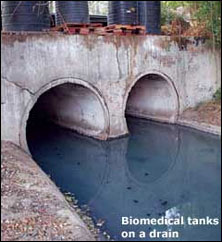 In an abandoned sewage treatment plant in Delhi, J M Enviro treated 50 million litres of sewage each day for six months. Satisfied with the results, the Delhi Jal Board extended the company’s contract. Tomar was not surprised. Just the savings on electricity was Rs 63 lakh.

The maximum energy in a treatment facility is used to run aerators, installed to increase oxygen levels for bacterial growth and survival. “In treatment plants the required dissolved oxygen levels for bacteria to function is 2-3 mg/l, while our consortia of patented microbes can work at even 0.5 mg/l,” said Aditya Singhal of Enviro-Way, a Canadian company which expanded its operations to India in 2003. As a result the power requirement reduced by up to 50 per cent, he added.

As a thumb rule most conventional sewage treatment plants require a retention time (from inlet to outlet) of 24 hours. “The live strains of microbes we add require eight hours to do the job,” said Singhal. By reducing the retention time more sewage can pass through the treatment plant each day. This too saves on power.

The appeal of bioremediation might increase as the price of the products reduces in the near future. Manufacturing units are currently located overseas, and import duties are levied on their products. But with the expansion of business potential in India, firms are planning to manufacture the patented products in India. J M Enviro is confident of setting up a unit in India by 2010. Company officials said this would cut their quoted prices by half.

The technology’s potential for sewage treatment cannot be demonstragted unless it is given a fair chance, companies argue.