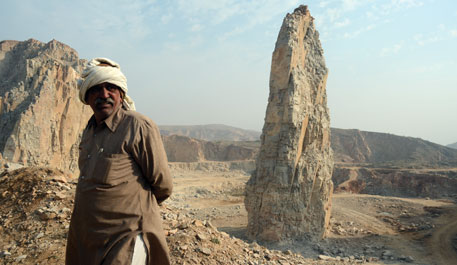 Call it sheer callousness of the Rajasthan government or connivance between administrative officials and mining mafia, two hills of the primitive Aravalli mountain range have been literally razed to the ground and beyond within a span of four years. All that remain are large open pits, as deep as several metres, interspersed with hundreds of dumpers, tractors and columns of granite, awaiting a final blow.

Residents of Harla ki Dhani village in Alwar district say mining is going on illegally in the Kahrani hills that are part of the Tijara reserve forest. Mining mafia are running a parallel administration in Tijara block, they allege.

It became evident on January 23. Following the Supreme Court direction on January 16, the district administration had formed a team of 50 policemen, forest officials and mining engineers to close illegal mines in the Aravallis. When the team went to the Kahrani hill, it was attacked by about 200 goons, armed with stones, thick sticks and machetes. More than six policemen were seriously injured. Not a single raid has been reported in the district since. Mining was going on when Down To Earth visited the village on February 4.

Harla ki Dhani residents say heavy influence of the mafia that manages illegal mining has silenced everyone. Some administrative officials and policemen are working hand in glove with them, they allege. In 2010, the residents wrote a letter to the district collector saying that “policemen charge mine contractors Rs 3,500 for allowing a dumper, Rs 5,000-Rs 10,000 for an earthmover and Rs 4,500 for compressor tractors as a monthly fee”. Talking to Down To Earth the residents promptly name members of the mafia group. Karan Singh, station head of the local police station, says: “It is hard to pin down the mafia.”

The raid on January 23 was not the first attempt to close the mines. In 2010, acting on a petition by Harla ki Dhani residents, the Rajasthan High Court ordered the government to stop illegal mining in the hills, which is Survey No 632 on the official record. “We approached the court after mining became rampant in the hills,” says Shyam Singh, one of the petitioners. Beyond his mustard fields lie the remains of the hills, once known for its greenery.

Mining on the Kahrani for granite, boulders and grit is not new. But earlier it used to be on a small scale and was done manually, Singh recalls. The sudden influx of miners began in 2008. They brought dumpers and earthmovers and used explosives to tear down the hills. “There would be at least 150 blasts a day, forcing us to stay indoors,” he says, adding that flying boulders from the explosion have damaged houses and drip irrigation pipes. “Our crops have been suffering for the past two years. Approaching the police or forest officials is futile.”

Mange Ram, who belongs to the Meo pastoral community in the village, says he had to sell all his 50 goats and abandon his traditional profession after the pastures were lost to mining or have been occupied by vendors who have set up food stalls for mine workers. “It was getting difficult to move the livestock due to increasing traffic of dumpers and trucks,” says Ram. The final blow came after one of his goats died after being hit by a boulder. He now works as a cleaner in the nearby Bhiwadi town. Around 50 pastoral families in Harla ki Dhani have migrated or changed their professions since mining took over the hills. Residents say had the government paid heed to the high court, at least some portion of the Kahrani could have been saved.

District Mining Officer J P Jakhar, who led the raiding team on January 23, explains: Alwar, where most of the mining in the Aravallis happen, is the victim of its proximity to the National Capital Region (NCR). Following the 2002 Supreme Court order, Delhi, NCR and Haryana enforced a complete ban on mining on the Aravallis by 2007. This is when the focus shifted to Alwar. Illegal mining flourished with support from the local mafia, till then engaged in petty crimes. The Kahrani hills are just one of the victims.

A report prepared by the Lucknow regional office of the Union Ministry of Environment and Forests (MoEF) in 2008 corroborates Jakhar’s observation. At least 626 cases of illegal mining and transportation of minerals were registered in Alwar in the previous two financial years. Reports of the Forest Survey of India show that in Tijara block alone, the area under illegal mining has increased by more than four times in five years; from 12.94 ha in 2005 to 51.2 ha in 2010.

According to the 1992 notification issued by MoEF, mining in the Aravallis of Alwar requires prior approval of the ministry.

The heavy influence of the mafia and mining contractors in the region was also palpable during the recent visit by the Supreme Court-appointed Central Empowered Committee (CEC) on mining to Alwar, as part of its mission to take stock of illegal mining in the Aravallis. But the team was misled by local officials, including the district collector and chief of police, travelling with them. “By taking us through other routes the officials ensured we missed the Kahrani,” says a CEC member. “We are horrified that such extensive mining is going on right next to the National Highway-8. We found out later through satellite imageries that we could not see many such areas in Tijara block,” he adds. At several places CEC found the roads leading to the quarries in Udhanwas village in Tijara were blocked with heavy boulders. The team during its visit shut down 27 illegal mines, 50 stone screening plants and seized eight crushers in and around Udhanwas.

In its report submitted to the apex court, CEC says though illegal mining is going on in Mewat, another Aravalli district of Rajasthan, it is rampant in Alwar. Over 60 million tonnes of bajri (small-sized grit) are excavated from across the state every month without environmental clearance, says the CEC report. As per a conservative estimate 60 million tonnes of bajri is sufficient to build 150,000 two-storey houses.

It criticises Rajasthan’s mining policies and blames it for spurring illegal mining in the area. For instance, the report says, the majority of the mining leases in the state are granted in “clusters”. Instead of granting individual leases or mineral concessions, the government grants royalty collection contracts or excess royalty collection contracts for minor minerals like granite.

“This is similar to the zamindari system,” says the CEC member. Royalty contracts are given to contractors, without any environmental or forest clearances. Contractors just pay a monthly fee in case of the stones blasted out illegally from the Aravallis. This allows many legal leaseholders who have permits for other areas to mine inside forest areas, causing extensive damage to its ecology and hydrology. In case of excess royalty contracts, the miners pay a fixed amount to the concerned mining department. Since there is no charge for the excess minerals mined from these areas, the mine owners make huge profits, the CEC member explains. He adds that following the visit of the CEC and the state’s action, the contractors have raised the prices of grit and are making a windfall.

Based on the CEC report, the apex court on January 16 asked the Rajasthan government to explain the legality and propriety of granting such royalty collection contracts. It asked the government to submit a report within two weeks, showing whether it has closed all illegal mines. Till the magazine went to print, the government had not submitted the compliance report.