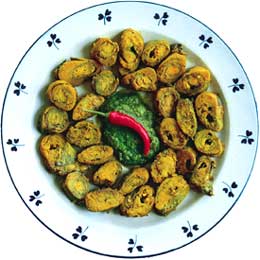 The leaves of arbi (Colocasia esculenta) must have come into homes as packing material for the conventionally consumed corms. As the best leaves came during the rainy season, they were turned into pakode, a fried snack that can be made from different vegetables. Pakode made from leaves of arbi look and taste very different from the conventional pakode and are therefore called patode in villages of Uttar Pradesh.

The vegetable is native to South-central Asia, most probably India, and introduced elsewhere by migrants. The genus has about eight species distributed throughout Polynesia and Indo-Malaysia. Arbi belongs to the family Araceae -- the same family as money plant and anthurium. Its large heart-shaped leaves also make it a favorite ornamental garden plant.

While the corms are consumed more commonly, the leaf stalks are used in West Bengal and Kerala as vegetable. In Orissa, rice is wrapped in the leaves for cooking to provide it aroma. In Assam the leaves are used as salad.

Green, tender leaves of the plant are used for making patode and studies have shown that they are more nutritious than the corms. Studies carried out on the Indian varieties usually do not provide an extensive comparison between the corm and the leaf, but one study does mention that while the leaves have 18 grammes of proteins per 100 grammes, the corms contain around 10 grammes of protein per 100 grammes.