Archaeology helps to unlearn too

Archaeology is the science that studies the remains of past cultures by investigating and analysing the objects people leave behind. It is a serious attempt to record and understand the past. As an area of study, it demands much from other science and social science disciplines. While geology or history might help the archaeologist to understand the significance of a find, disciplines such as chemistry, botany and zoology provide vital clues about its age, milieu and environment. In some cases, archaeology rewrites the history too!

Archaeology helps to unlearn too 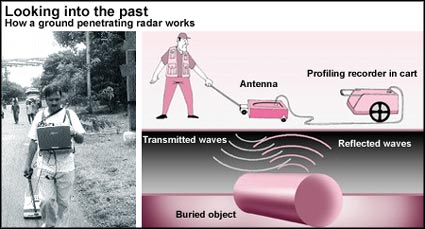 The March 5 order of the Allahabad High Court, directing a 12-member Archaeological Survey of India (asi) team to excavate a 30 m x 30 m area at the disputed site at Ayodhya, has led to a renewed interest in archaeology. The order is based on explorations carried out by an Indo-Canadian firm, Tojo-Vikas International (Pvt) Ltd -- doing geophysical and seismic surveys for private and government project sites for the last six years -- at Ayodhya in January.

Archaeology is the science that studies the remains of past cultures by investigating and analysing the objects people leave behind. It is a serious attempt to record and understand the past. As an area of study, it demands much from other science and social science disciplines. While geology or history might help the archaeologist to understand the significance of a find, disciplines such as chemistry, botany and zoology provide vital clues about its age, milieu and environment. In some cases, archaeology rewrites the history too!

One of archaeology's main objectives is to construct past human activity. This is only possible if this particular human activity is documented within its context. Thus a find of an image or sculpture by itself is of little use unless the archaeologist knows where it has been found -- a house, shrine or garbage dump.

Archaeologists use special techniques and equipment to gather their evidence precisely and accurately. They must keep detailed records of their findings. This is an extremely vital activity. Once an excavation begins, it digs into -- and digs past -- many layers of structures. It is not possible to 're-do' a dig; thus every stage of the dig is minutely recorded, or else the evidence would be destroyed for all time. A typical archeological survey begins with identification of a site, followed by exploration and detailed and careful excavation and finally, the evaluation of the find in space and time.
A site has to be located. Some may be above ground, underground or underwater. Some large sites are located easily because they are easily visible or can be traced from descriptions in ancient stories or other historical records. There are also instances of accidentally finding archaeologically important objects while digging for roads or houses. Once a site is located, the archaeologist explores the area. This can be done either by walking the site, or with the help of aerial photography using powerful cameras and remote sensing or both.

Some of the widely-used detailed exploration techniques are radar, resistivity and magnetometry surveys. The resistivity technique measures the resistance offered by stone structures when electric currents are passed through the soil. While the soil and the groundwater bodies beneath offer little resistance to the current, sufficiently large structures such as a wall or a platform can lead to a noticeable increase in resistance.

Magnetometry surveys are useful in mapping ancient fire hearths, furnaces and buried building foundations. It is based on the principle that when clay bricks are fired for use in construction, tiny iron particles in these bricks align along the earth's magnetic field. A magnetometer can pick up small, even very feeble, magnetic disturbances thus caused on the earth's magnetic field by the object buried under.

Ground-breaking radar (gpr), which uses electromagnetic waves, was the technique Tojo-Vikas used for its so-called exploration in January. The Allahabad court's order to excavate was based on its claim that the survey revealed the existence of some structures, belonged to different periods, 10 to 15 feet under the ground. Scientists generally arrive at such an assumption by measuring electromagnetic waves reflected by large buried structures.

All three techniques are capable of picking up what archaeologists call "anomalies" hidden underground at a depth of 5 metres or more. Selective use of techniques, however, may not give the clear picture. For instance, the gpr technique Tojo-Vikas employed may spot a structure, but cannot rule out the possibility that the structure was not a human habitation. This can be easily done if magnetometry is also used alongside. Suppose magnetometry detects a large number of furnaces or hearths; that might indicate a cluster of houses rather than a temple structure. Since Tojo-Vikas has not done this, skeptics say that they are only looking for what they want to see. In other words, that the nature of the structure has been pre-decided.


Once exploration or surface survey establishes the archaeological importance of a site, archaeologists dig carefully for buried objects in a process called excavation. The method of excavation adopted depends partly on the type of site. One such widely used excavation method is vertical trenching or vertical digging. The archaeological team earmarks a few locations on the site for vertical digging. As the digging progresses, buried objects found in different layers of soil are properly recorded against each layer of the soil. This process of analysing the order and position of layers of archaeological remains is called stratigraphy and it helps unravel how different cultures and settlements existed in a particular location over a long period of time.

Generally, digging is undertaken until the undisturbed virgin soil is reached. Tools used in excavation range from tractors and other heavy equipment to small spicks and paint brushes. In some cases, the scientists strain soil through wire screens to recover extremely small objects. In other cases, they analyse soil in a laboratory to detect either grains of pollen or chemical changes caused by human remains.

As and when the objects of archaeological significance are unearthed, the scientists describe, photograph, and group them according to type and location. For example, broken pieces of pottery, called potsherds, are bagged together by excavation team. This collection then goes to the field laboratory to be cleaned and labelled.

At the field laboratory, special care is taken to reserve objects made of metals and wood. For example, rust on a metal object is removed without damaging the surface. Water-soaked wooden objects may crack or lose their shape when exposed to the air and sunlight; so, these are kept wet until specialists called conservators can preserve them.

Archaeologists can interpret their findings only if they can detect patterns of distribution of artifacts in space or through time. To find these patterns, archaeologists first classify artifacts into groups of similar objects. Two main systems of classification are typology and seriation. In typology, objects are grouped according to what they look like, how they were made, and how they were used. In seriation, all objects of one type are arranged in a series that reflects changes in style. These changes either developed gradually as time passed or as a culture spread to other areas.

In contrast, absolute dating determines the age of an object in years. There are many absolute dating methods. The method used in a specific case depends mainly on the type of object being dated. The most widely used method of dating the remains of ancient plants, animals and human beings is radiocarbon dating. This technique is based on the fact that all living things constantly absorb two kinds of carbon atoms, carbon 12 and carbon 14. Atoms of carbon 14, also called radiocarbon, are unstable and change into nitrogen atoms as a known rate. After an organism dies, therefore, the ratio of carbon 14 to carbon 12 also decreases at a known rate. As a result, archaeologists can compute the age of a specimen by measuring the amounts of carbon 12 and carbon 14 present. This traditional method of measurement can be accurate as far back as 50,000 years. A newer method, using a device called particle accelerator, is accurate up to 60,000 years even with the tiniest specimens.

Similarly, to date rock pieces scientists use potassium-argon dating. Rocks generally contain radioactive potassium 40, which changes into argon 40 gas at a constant rate. Scientists measure the amount of both potassium 40 and argon 40 gas present and then calculate the age of the rock. The best-known method for dating wood is called dendrochronology, which counts the yearly growth rings visible on cross sections of cut trees. But the problem with dendrochronology is that it can be used only with wooden objects up to about 8,000 years.

Can archaeology help resolve religious disputes? It might be difficult. For instance, the controversy surrounding the Shroud of Turin, part of a cloak Catholics believe was used to cover the body of Jesus Christ after crucification. While carbon testing dated its origins between 1290 and 1360, this has not yet been accepted by the believers.