Are some humans more equal?

A recent study suggests that poor nations will have to do with more arsenic in water. A rebuttal by the arsenic and medical group, School of Environmental Sciences, Jadavpur University, Kolkata

Are some humans more equal? 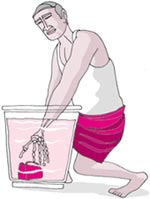 In September 2003, the Bureau of Indian Standards set the desirable limit of arsenic in drinking water as 0.01 mg/l. This is in consonance with the standard recommended by the World Health Organization (who) and the us-Environmental Protection Agency (epa). However, in a recent paper ('Arsenic drinking water regulations in developing countries,' Toxicology, Vol 198, 2004, pp 39-44) Allan H Smith and H M Smith -- scientists at the University of Berkeley, usa -- suggest that the limit should be raised to 0.05 mg/l for developing countries.

Evidences in scientific literature show that arsenic standards set by international agencies such as the who and the epa are influenced by three factors: daily water intake, nutritional status and arsenic from dietary sources. It is well established that these factors vary from country to country: the disparity between developing and developed nations is particularly acute -- mainly because of socio-economic factors and varying food habits of people.

In fact, the who and the epa arrive at the 0.01mg/l standard through use of varying daily per capita water consumption figures: the former reckons this is 2 litres per day, while the latter estimates it at 1.2 litres per day. But studies by researchers of the School of Environmental Sciences, Jadavpur University, Calcutta, demonstrate that in villages of West Bengal and Bangladesh, per capita water consumption is much higher: 4 litres for adult males, 3 litres for adult female and 2 litres for children. Moreover, Allan Smith and H M Smith themselves note that, "In poorer countries such as India and Bangladesh... arsenic in water exposes people who are obviously undernourished...this increases arsenic effects." So, there is good reason that arsenic standard for these regions should be much lower than that recommended by the who and the epa.
According to an authorative study (U K Chowdhury et al, 'Groundwater arsenic contamination and human suffering in West Bengal, India and Bangladesh,' Environmental Sciences, No 8, 2001, pp 393-415), total arsenic intake by people in West Bengal and Bangladesh can be classified in three categories. Category i includes arsenic consumption from drinking water alone. Category ii consists of arsenic from food (rice and vegetables) and category iii comprises arsenic from contaminated water added to pantavat and other food preparations -- rice, curry and drinks such as tea and lemon water. More importantly, arsenic intake through food in West Bengal and Bangladesh is inorganic in nature; this is far more toxic than the organic arsenic forms present in seafood, which constitute part of diets of people in the developed world. This again calls for lowering the value of arsenic standard for the Third World nations.

In fact, another analysis (Guha Majumdar et al, 'Epidemiological study on various non-carcinomatous manifestations of chronic toxicity in a district of West Bengal' in W R Chapell et al (ed), Arsenic Exposure and Health Effects iv, Elsevier, 2001) of arsenic affected people in West Bengal -- of which Allan H Smith is a co-author -- notes, "Even drinking water with arsenic concentration between 0.01 to 0.05 could produce pigmentation and keratosis in some people who drank it for more than 10 years." And in the introducing sentences of the Toxicology paper, Allan Smith and H M Smith observe, "Even when arsenic concentration in drinking water is reduced to 0.01 mg/l ... potential cancer risks remain high." So, it is baffling that they recommend a higher value while concluding their study.

We understand that bringing down arsenic levels to 0.01 mg/l means a sea change in strategies. For one, the monetary burden is likely to be quite high. Secondly, detection equipment should be able to spot arsenic a few times lower than the prescribed standards to accommodate future regulatory changes. But in our survey of arsenic removal plants (these cost millions of dollars) we found that none of them could bring down arsenic level below 0.01 mg/l -- though some could bring down the arsenic to below 0.05 mg/l (6th Report on arsenic removal plant: part A and B, School of Environmental Studies, Jadavpur University, Kolkata, July 2004.). Coupled with this are inherent constraints of measuring arsenic below 0.01 mg/l level by using field kits that also cost millions of dollars (M M Rahman et al, 'Effectiveness and reliability of arsenic field testing kits: million dollar screening projects effective or not,' Environmental Science and Technology, No 36, 2002, pp 5385-5394). Nevertheless, we should admit our limitations and the scientific community should develop strategies to supply safe drinking water to people in the Third World following the present who guideline value.

The authors can be contacted at dcsoesju@vsnl.com