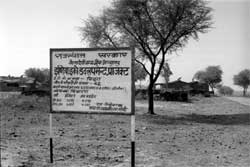 the verdant forests of Kailadevi Wildlife Sanctuary in Rajasthan, once faced with the threat of being wiped out, are thriving again thanks to the efforts of villagers in the area who have contained the axe with remarkable success.

The sanctuary, an extension of the Ranthambor National Park and spread over 40 km in the south of Karauli district, had witnessed large-scale destruction during 1970-80 due to extensive felling for making coking coal. As a result the area was unable to meet the fuel and fodder needs of the villagers adequately. To protect whatever was left of their trees from the sheep grazers coming from western Rajasthan, the residents of Lakhru ki Gwari introduced the concept of kulhari band (axe ban) in 1985. Since then as many as 36 villages in the sanctuary have adopted it, though in different strengths.

The movement emerged after a huge fight involving exchange of fire between the locals and the grazers, who were cutting branches from the few trees remaining in the area to feed their sheep. This led to the setting up of a kulhari band panchayat (kbp) which had members from each family in the village. To protect the forests, the panchayat set down the ground rules -- nobody could carry an axe in the area and only the dead leaves and twigs could be taken outside. In case a person was caught breaking the rules, the panchayat had the right to fine him. Green trees were cut only when someone in the village needed wood for a house or an agricultural implement, which could not be made from dead wood. The livestock could go into the forest to graze but green leaves could be stripped off with bare hands only.

"Regeneration started but it was not easy," says Ganpati Lal Meena, president of the kbp of Lakhru. As the trees were only in the initial stages of growth, dead wood for fuel was not there. Neither did we want to cut off all the green leaves, as this would have retarded the tree's growth. But people managed to get through that year and thereafter the leaves and wood were in plenty.'' However, that is not the only thing for which trees are needed. "Our children were taught in school that trees brought in rain. Now we are the first village in the area to receive rain," he comments happily.

Five years ago people from Daulatpura, Paharpura, Kalyanpura, Pulan, Chondkya Kalan and Matoriya ki Gwari formed a panchayat, with its headquarters at Daulatpura. The panchayat imposed fines that could range from Rs 500 for cutting a single tree to Rs 5100 for taking a truck load out of the village. "Saying sorry here holds no water, giving the fine is important as it is the only way to ensure that people do not do it again," says 53- year-old Kewal Bairwah of Chondkya Kalan.

Today, however, the concept is working well only in areas where the community is strong. Even in Lakhru Ki Gwari, kulhari band is facing a slow death. The villagers, who were once willing to die to ensure the protection of their trees, now move stealthily in the forests at night to steal wood for making houses and agricultural implements. In Neniya ki Gwari, where it was the forest department that initiated the project, the rules have become far too strict. Even when there is a dead tree, it cannot be cut because of the restrictions on taking an axe inside the forest, says 40-year-old Kampoori Bai. According to Atul Sharma, district collector, the forest officials are totally within their rights when they stop the people from taking the wood.

Arun Jindal, director of Karauli-based Society for Sustainable Development, a non-governmental organisation, differs saying that the forest department has hijacked the concept using the panchayat to initiate the World Bank funded ecodevelopment project, which has taken away the power from the people and given them nothing in return.