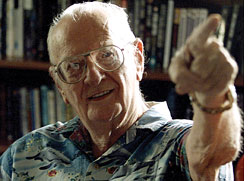 In his 1992 book How the World Was One, Sir Arthur C Clarke described a dream he once had one day, cnn founder (and then owner) Ted Turner is offered the post of the President of the world, but he turns it down politely--because he didn't want to give up power.

The trouble with Clarke's dreams was that many kept coming true, often faster than his own vivid imagination envisaged. Like Albert Einstein, Clarke believed that imagination was more important than knowledge--he called himself an extrapolator, one who expanded from current knowledge to what was scientifically plausible.

When he proposed the idea of the geosynchronous communications satellite in Wireless World in 1945, nobody took any notice--and even he didn't expect it to happen during his life time. But the space age lay a little more than a dozen years in the future, and in 1965, the first commercial communication satellite, Early Bird, was launched.

In his 1964 short story, Dial F for Frankenstein, Clarke speculated the world's inter-connected telephone system becoming a conscious entity that then takes over the world. When British computer scientist Tim Berners-Lee later acknowledged how this story inspired him to invent the World Wide Web in 1989, Clarke exclaimed "Oh dear, what have I done?" He told an interviewer "If I wrote that story today, it won't be the world's telephone system but the Internet....When the Internet suddenly take over."

Clarke added that in some ways the Internet has already taken over our lives. "I guess the Internet is not yet intelligent--but nor are most of the people who use it".

In recent years, Clarke was fascinated by the phenomenal rise of search engines, whose basic concept he had outlined decades earlier. Reviewing a book on Google, he said in 2005 "If communication satellites are an integral part of the nervous system of humankind, Google must provide part of its brain. Of course, it's still in early stages of evolution under the watchful eye of its founders. But the future can hold any number of scenarios."

Clarke believed that search engines could accelerate the quest for artificial intelligence (ai). He wondered Would this one day lead to the creation of hal, the intelligent and ultimately malevolent computer in Clarke and Kubrick's 1968 movie 2001 A Space Odyssey? Or could it produce an android like Star Trek 's Data? Or usher in more sinister possibilities explored in the Matrix trilogy?

From his equatorial home in Colombo, Clarke watched with bemusement how billion dollar information-media-entertainment industries evolved. While he never regretted not patenting his communication satellite idea, he once famously told Ted Turner "You owe me 10 per cent of your income".

Clarke was more concerned about the social and cultural impacts of information globalization. "Communication technologies are necessary, but not sufficient, for us humans to get along with each other," he noted in his 90th birthday reflections last December. "Technology tools help us to gather and disseminate information, but we also need qualities like tolerance and compassion to achieve greater understanding between peoples and nations."

Clarke remained an optimist to the end, "if only because it offers us the opportunity of creating a self-fulfilling prophecy". He campaigned against all weapons of mass destruction (nuclear and conventional), and advocated turning digital communication tools to work for the poor and disadvantaged--or 'geek to meek' as he called it.

Clarke was a public intellectual who supported rational discussion. He made fun of ivory tower research institutes, and his favourite definition of an intellectual was someone educated beyond his/her intelligence. He welcomed governments and industry funding research, but didn't want bean-counters in charge of discovery and invention.

As he said, "If there had been government research establishments in the Stone Age, we would have had absolutely superb flint tools. But no one would have invented steel." In his writing, public talks and television hosting, Clarke dreamed of grand, bold--and sometimes even scary futures. He was fond of quoting Mark Twain "The man with a new idea is a crank--until the idea succeeds". This is probably why he encouraged seemingly far-fetched ideas like cold fusion and vegetation on Mars. Another 'crazy' idea he championed--the Space Elevator --is now being taken seriously.

Clarke's prolific and diverse career might be summed up by the words of another British writer, T E Lawrence "All men dream, but not equally...the dreamers of the day are dangerous men, for they may act their dream with open eyes, to make it possible."

Nalaka Gunawardene is a Colombo-based writer and journalist who was spokesman for Sir Arthur C Clarke in the past decade. He blogs at http//movingimages.wordpress.com