Galileo upturned the Biblical theory of the universe

On February 13, 1633, Galileo Galilei arrived in Rome for trial before the Catholic Church's inquisition committee. In 1609, the Italian astronomer had turned his spyglass to the skies and provided empirical proof for the Polish astronomer Nicolai Coppernicus' theory that Earth revolves around the Sun. This was heretical. Most people in Europe believed the Biblical theory that the Earth was the centre of the universe.

Galileo was convicted and sentenced to life imprisonment; the sentence was later reduced to permanent house arrest at his villa in Arcetri, south of Florence.

Actually, Galileo did not set out to be a sceptic. In fact one of his early works was an investigation of the dimensions of hell as described in Dante's Inferno. He even delivered two public lectures on the topic at Accademia Fiorentina--a famed centre of the Italian Renaissance.Galileo was 26 years old then, a professor of mathematics at Padua--another famous centre of the Italian Renaissance.

But what he saw militated against the Biblical worldview--this, in fact, drew from the theories of the fourth century BC Greek philosopher Aristotle. In the Aristotelian scheme, the universe was divided into two regions with very different characteristics. The celestial, which reached from the sphere of the moon to that of the fixed stars, was perfect and unchanging. Below the moon lay the world of corruption and change--the Earth. It was the realm of all malaise rain, erosion and decay.

Nothing on Earth was perfect every rock, stone, tree was irregular and uneven. This abode of imperfection was the centre of the universe. Around it were arranged in successive spherical shells the elements of water, air and fire. The sphere of fire reached up to the moon--the first heavenly sphere.

Aristotle's neat arrangement was spoiled by comets and shooting stars. Both appeared to be phenomena in the sky, but were as irregular and as chaotic as events on Earth. In Europe, during the middle ages, shooting stars were rubbished as old wives' tale and comets were considered as phenomena occurring in the upper atmosphere of Earth.

But people began viewing things differently around the mid-16th century. In 1543, Copernicus unseated the Earth from the centre of the universe. In 1600, astronomer Giordano Bruno was burnt at the stake for arguing that stars were distant suns, possibly having planets around them some perhaps with life. To top it all on October 9, 1604 Kepler observed a new star almost as brilliant as Venus. This disturbed that unique characteristic of the celestial order nothing new should appear. Initially the new star--today we know it as an explosion of a star--supernova, 3C 358--was dismissed as a phenomena in the upper layers of Earth's atmosphere. However, Galileo, who tried to find mathematically the distance between the new star and the Earth, concluded it to be a phenomenon beyond the moon, firmly in the celestial sphere. Seeds of doubts were sown.

Few years later, around 1608, a Dutch lens maker, Hans Lipperhey, invented the telescope, an instrument that magnified distant objects. Galileo came to know about it in early 1609. Immediately he set out to study how lenses worked. He found that he would need a long focal length convex lens as objective and short focal length concave lens as eyepiece to get maximum magnification. On-the-shelf lenses, fabricated for spectacles, had a very narrow range. Galileo set out to grind out his own. In 1609, he built a telescope that magnified eight times and subsequently another one that magnified 20 times.

In late 1609 Galileo made his first observations of the moon. He was surprised beyond expectation the moon was far from the perfect celestial body. It was potholed with craters. 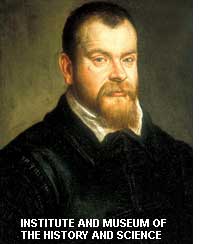 Galileo saw jagged edges on the moon, which he realized were mountain tops.

Then he turned his attention to the next bright object in the sky Jupiter. He was in luck. Jupiter was in its inferior conjunction--it's nearest position to Earth. So, it was bright. On January 10, 1610 he observed three tiny star-like dots near Jupiter. Few days later he could see four, but their positions had changed. The next day, their position was different again. Going by the Biblical worldview, the stars should have been fixed on to the celestial sphere. But on consecutive days, Galileo found them on either side of Jupiter. By January 15, 1610, Galileo had concluded that these four starlike objects were indeed satellites (moons) of Jupiter. For the first time in recorded history four new celestial objects not mentioned in any holy book were discovered. And what's more they were orbiting another planet and not Earth. Galileo named the moons of Jupiter, Sidera Medicea (Medicean stars) in honour of Cosimo de Medici, the Grand Duke of Tuscany, whom Galileo served as "first philosopher and mathematician" after leaving the University of Pisa in 1610.

Galileo wondered if Copernicus could be right; may be Earth and all other planets indeed went around the Sun. Then he turned his attention to the most numerous objects in the sky--the stars. But they did not reveal any features--planets resolved into nice discs, but stars were mere specks on the telescope. He concluded, the stars were very very far away and hence appeared point-like on the telescope.

Galileo put together his observations and interpretations in a tiny book, Starry Messenger. It was published in March 1610 and had a print run of 550 copies. Subsequently he observed Venus, Saturn and other objects of the celestial sphere. The Sun showed dark spots (sunspots) and his telescopic observation of the Sun cost Galileo his eyesight.

Galileo was about 45 years old when he wrote Starry Messenger. By then, he was famous for his invention of crude thermometer, work with magnets, and for his laws of falling bodies. He had devised a pump to lift water using horse power, and had come up with an explanation for tides in seas. But his astronomical discoveries only brought Galileo misery. The orthodoxy in Rome was enraged. It is said when Galileo offered to show the heavens through his telescope, many refused to peek, lest they be tempted by the devil. 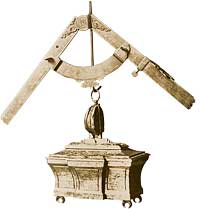 The inquisitors acted swiftly. In 1616 the church issued a decree declaring the Copernican system "erroneous." Galileo was ordered not to support this system. In 1624, Gallileo travelled to Rome to appeal the newly elected pope, UrbanVIII, against the edict. The pope did not revoke the edict but gave Galileo permission to write about the Copernican system, with the provision that it would not be given preference to the church-sanctioned model of the universe. With the pope's imprimatur, Galileo wrote his Dialogue Concerning the Two Chief World Systems-- the Biblical and Copernican. In the dialogue, Galileo made the objections to Copernicus' theory sound unconvincing and even ridiculous. He was put on trial for heresy, found guilty and ordered to recant his errors. At some point during this ordeal Galileo is supposed to have made his famous statement "And yet it moves," referring to the Copernican doctrine of the Earth's rotation on its axis.

Although he was forbidden to publish, Galileo devoted himself to his work on motion, arriving at theories that were later refined by others. He died blind at the age of 78 in 1642.