In the melee over moving Kolkata's tanneries to a new site, the initiative to tackle pollution has been nearly lost sight of. The Supreme Court zooms in on this lack of focus in its latest directive 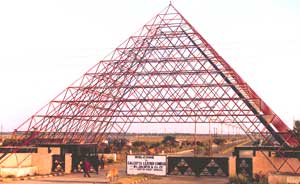 Even as the February 28, 2002, deadline - set by the Supreme Court (sc) for about 550 Kolkata tanneries to either shift or stop production -- passed, there was a flurry of activity to give the polluting units a new address: though miffed at getting a raw deal, tannery owners put up the shutters at the existing sites in Tangra, Tiljala, Topsia and Pagladanga; the state government allotted nearly 69 hectares (ha) out of a total project size of 445 ha; and the West Bengal Pollution Control Board (wbpcb) issued over 200 no-objection certificates (nocs). But all the concerned parties had so far hedged in dealing with the issue of the common effluent treatment plant (cetp). Consequently, the environmental aspect -- which formed the pivot of the apex court order -- remained unaddressed. It, therefore, came as no surprise when the sc stepped in on April 2, fixing a time-frame and cost-sharing formula for setting up the cetp.

Earlier, state industry minister Nirupam Sen's announcement in the assembly bore testimony to the government's lack of commitment. He revealed that post-relocation the tanneries would commence operations at the Calcutta Leather Complex (clc) in Bantala from mid-October 2002. But experts feel that notwithstanding the sc order, the cetp may not be ready before 2003. "If the tanneries start operating at clc without the cetp, they will cause more harm to the environment than earlier," aver pcb sources. Commenting on the hectic efforts to save an industry that provides more than five lakh people their livelihood and has an annual turnover of about Rs 4000 crore, an environment department official says: "Nothing wrong with these except that the environment seems to have been sidetracked in the initiative which was meant to save it in the first place."

The various stakeholders, meanwhile, pass the buck to each other for failing to install a cetp at clc. Those playing the blame game include the tanners, M L Dalmiya & Company -- the agency that was awarded the project for running clc on a build-operate-transfer (bot) basis in 1997 -- and the West Bengal government. The leather industry attributes the delay to the bot party's "lack of initiative, financial instability and, perhaps, inefficiency". M L Dalmiya & Company points out that the state government could not procure the earmarked land until recently. And the authorities, after a series of flip-flops, recently announced that the state government will construct the cetp.
According to a state pollution board study, "every tonne of processed hide generates about 30-40 kilolitres of wastewater out of which approximately five per cent is chrome liquor". Even nodal body and technical consultant of the state government Central Leather Research Institute (clri) observes in its report that the tanneries' daily "biological oxygen demand (bod) of discharge is 48 tonnes, chromium release is 12 tonnes per day, chloride discharge works out to 300 tonnes and total dissolved substance outflow is 600 tonnes". In these circumstances, the cetp is crucial to the leather complex. Despite this, tardy progress has been made so far.

The design of the six-module cetp is also open to question. The plant is expected to take care of around 30 million litres of effluents by processing 1000 tonnes of leather every day. There are also plans to have four chrome recovery units, each with a daily capacity to handle 20,000 litres. Industry experts have, however, voiced their concern over the proposed cetp's cost-effectiveness and as well as its ability to treat industrial waste.

Though wbpcb scientists discount these apprehensions, the logistics of the entire project does pose practical problems. As per the submission of the 217 tanneries that have been given nocs, their productivity already touches the maximum limit -- 1000 tonnes. How then will the remaining 300-odd industries be accommodated? The pcb has decided that for the time being it will issue only provisional nocs and tackle the productivity problem later.

Another impeding factor is that not more than 30 mld (million litres per day) of groundwater can be extracted from the area, as revealed in a state water investigation department study. In fact, many environmentalists have questioned the very logic behind the selection of Bantala for siting the new leather complex, because it is in the vicinity of the wastewater recycling region (wrr). "We don't know yet how effectively the tanneries will be shifted, but pollution will definitely be shifted," laments an official of the environment department.


It was in 1996 that the apex court passed a directive ordering the tanneries located in east Kolkata to shift to the clc in Bantala, an area located on the eastern fringes of the city. Ever since, the state government has been seeking extensions for the completion of the project. During this period, the sc has often pulled up the authorities for employing dilatory tactics by filing pleas on some pretext or the other. According to legal experts, "The Supreme Court has monitored the case almost like an administrative body and has even given instructions regarding minor details such as land pricing, cetp funding source, etc."

The tardy progress on the cetp project has prompted the apex court to set October 15, 2002, as the date for completing work on the first two modules of the plant at a cost of Rs 31.5 crore, to be borne equally by the state government and the Union ministry of environment and forests (mef). Prior to the latest sc order, the cetp's cost was to be shared by the mef and M L Dalmiya & Company. But the developer was threatening to pass on the burden to tanners. Earlier, in August 2001, the sc had given the state government six months to comply with the directive on the cetp .

Though the tanners have officially shut up shop since early March, hides are still being processed on the sly. A state official says, "If we stop production fully it will affect the livelihoods of a few lakh people and the resultant workers' resentment could snowball into a major law and order problem." In this context, clri has chalked out a plan for the tanneries that will enable them to temporarily operate from their old addresses by employing a cleaner production method (see box: Short-term solution ). But this scheme would first have to be cleared by the sc.


The tanners of east Kolkata, who had initially put up stiff resistance to the move to relocate them, have gradually come to terms with the fact that sooner or later they will have to shift out. Their intransigence early on can be attributed to the high stakes involved in the leather business (clri estimates put the domestic market at Rs 2500 crore while exports are pegged at nearly Rs 1400 crore). Then there is the logistical nightmare of transportation of the massive workforce.

Javed Khan, tannery owner and member of mayor-in-council, Kolkata Municipal Corporation, however, strikes a conciliatory note: "We are ready to shift. Already more than 500 industries have deposited their money for land. But how can we move if proper infrastructure is not provided?" Though there are various factions among tanners and tannery workers, most seem to concur with him.

The industry is also nearly unanimous in criticising clc's promoters. "They have no intention of doing their job properly. Neither do they have the money nor the expertise to undertake such a huge project. They only want to make a fast buck using their proximity to the government," allege tanners. M L Dalmiya & Company refused to comment on the issue.

The state government too has drawn flak. The entire episode has not only raised questions regarding the efficiency of the authorities, but also about their transparency. Coming at a time when West Bengal chief minister Buddhadeb Bhattacharya is striving to inculcate the do-it-now spirit to spur the administration into action, the tannery saga sends a diametrically opposite message.

But the worst hit are lakhs of labourers. "We had left the matter in the hands of the state government. Today, the future of an entire industry and thousands of families is jeopardised," rues a member of the Calcutta Leather Tannery Workmen's Union.