At an atom's level

Nanotechnology has immense potential, but it is also a little-known area with many dangers

At an atom's level 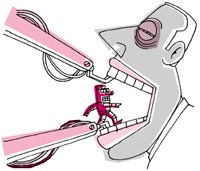 Estimates indicate that the current global investment in nanotechnologies is about us $6 billion -- more than us $2 billion of that comes from private sources.

But what exactly is nanotechnology? It is a set of techniques where scientists and engineers manipulate matter at the level of atoms and molecules to build devices and systems. Unlike "biotechnology" where the word itself lets you know that bios (life) is manipulated by human art (techne), nanotechnology indicates only the scale of the art. A nanometre (nm) equals one billionth of a metre. Its dimensions are about 50 times smaller than a typical virus and a strand of human hair is about 80,000 nm. The materials of this technology are chemical elements of the Periodic Table -- stuff that makes up everything on this universe, including the dna.

What lures scientists to research matter at a nano-scale? At this level, matter is chemically more reactive and its optical, electrical and magnetic behaviours change. And then, matter can even permeate human skin and deceive the ablest immune system to deliver drugs; medicines can in fact be delivered directly to diseased cells. Ability to make precise manipulations at the nanoscale also opens up a world of other potential applications. Computers can get smaller and faster and sensors can monitor everything -- from crops to cows to crooks to chemical warfare agents to customers.
The possibilities of nanotechnology are indeed immense. Hold on, critics also tell us of its potential dangers. For instance one of its avatars, nanobiotechnology merges three advanced frontiers of science -- nanotechnology, information technology and biotechnology -- and according to the Canada-based activist organisation etc Group, "Controlling Bits, Atoms, Neurons and Genes adds up to a little Bang theory enabling a godlike mastery over all knowledge, matter, mind and life."

And such possibilities are rife in some of the areas in which new nanobiotechnology firms are working: incorporation of non-living, nano-scale materials in living organisms (such as drug delivery systems or sensors to monitor blood chemistry); creation of new synthetic materials that have biological components (such as proteins incorporated into plastics). But why should we worry? Aren't pacemakers and artificial joints also examples of introducing non-living mechanics into the human body? Yes they are, but let us not forget this new technique operates at the nano-scale. Such materials can penetrate our immune system and even cross the blood brain barrier. A foreign nanoparticle has no problem of biocompatibility because at the nano scale, there is no clear distinction between the biological and non-biological. Prospects of nano-technology -- nanobiotechnology in particular -- are indeed both scary and exciting.

And such contradictory prospects are even truer when products of the technology are living organisms themselves. Inside the human body they might continue to do what nature intended -- procreate. And this may cure illness but also play havoc upon our immune system.


Right now, supporters of the technology are overwhelmed with its potential. They say that the E coli bacteria can take on oil spills and the nanobiopolymer car door can use embedded proteins to repair itself after a collision. And there is no shortage funds for such research. Since 1999 about 52 per cent of the us $900 million venture capital funding for nanotechnology has gone to nanobiotechnology startups. Today there are several projects to develop newly made nanobio organisms. For instance, Craig Venter -- known for his work on the Human Genome project -- and his Institute for Biological Energy Alternatives in Rockville, Madison, usa have been awarded us $12 million by the us Department of Energy to create new life forms engineered to produce energy or clean up greenhouse gases.

Other biotechnologists are building new life from stripped-down microbes, nanotechnologists are building biological machines from the bottom-up. The implications are breathtaking: not just new species and new biodiversity, but life forms that are human-directed and self-replicating. Consider this: scientists at the Nanometer Consortium at Lund University in Sweden, on the other hand, have produced tiny forests of nano trees. These "trees", though inanimate, can be "taught" to replicate plant photosynthesis and extract energy from sunlight, says Knut Deppart, a Lund University professor involved in the study.

Among other examples, us researcher Robert Freitas is developing an artificial red blood cell that can deliver 236 times more oxygen to tissues with natural blood cells. The artificial cells, called a "respirocyte", measures one micron (1000 nm) and has a nanocomputer on board, which can be reprogrammed remotely via external acoustic signals. Freitas hopes his device can treat anaemia and lung disorders, but also will enhance performance in physically demanding areas such as sport and war.


According to projections of the us National Science Foundation, the world market for nanotechnologies (nanobiotechnology being the prominent one) is going to be us $ one trillion by 2011-2015. Given the sheer magnitude, scientists and critics alike feel that there should be regulatory frameworks at national and international levels to control the run-away growth leading to potential threats -- though they disagree on the degree of regulation. The uk's scientific bodies recommend extensive health and safety studies of these novel technologies. They have asked all regulatory bodies in the country (in fields such as health, environment and industry) to debate if the current level of regulation and expertise is adequate to protect humans and the environment from the hazards of nanomaterials, including nanobiotech products.

The etc group, which in mid-2002 called for a moratorium on use of synthetic nanoparticles in the lab and in any commercial products until governments adopt a "best practices" for research, on the other hand, says current regulations are at least a decade behind. "Nanotech products are already available commercially and laboratory workers and consumers are exposed to nanoparticles," says the group's executive director Pat Mooney.

Ony a few companies in a handful of countries control nanotechnology today. So, an even greater worry is that unregulated scientific quest for finding newer commercial applications might result in these companies and countries ignoring all accepted safety norms.