At the North Pole

At the North Pole

British explorer and environmentalist Pen Hadow and two colleagues are at the North Pole measuring the depth of ice. Equipment from Vanco, a virtual network operator, was used to transmit videos almost in real time. Excerpts from Hadow's blog: 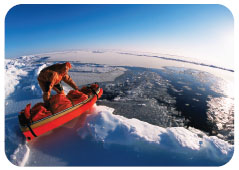 To fly from Yellowknife (Canada) to our trials base, the Eureka Weather Station, at 80 degrees north, we had chartered our own Dornier 228. Our flight plan involved refuelling at both Cambridge Bay and Resolute Bay...With lousy weather over Resolute, we had to develop a back-up..The only way to avoid losing at least a day of our precious five days trial period was to build in the option of refuelling at Pond Inlet, considerably off route..This meant replacing trial equipment payload with extra flying fuel. The (trial equipment) had to be cut back by 295 kg... we made it via Resolute! On schedule. 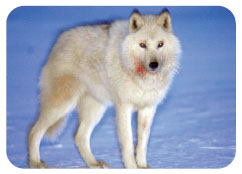 [Our] drilling rehearsals were somewhat thrown when Martin (who was photographing and filming proceedings) spotted a polar wolf approaching the drillers! He was even more excited when he saw that it was the alpha male followed by his 16-strong pack to investigate our antics!!! If Martin was excited, you can imagine how 'excited' the drillers were feeling as we were encircled by a pack of wild wolves. "Hey guys, we're on your side. We're trying to flag up your environmental problems...!" The good news was that Martin nailed some corking photographs and footage. Most of the drillers made it back alive... 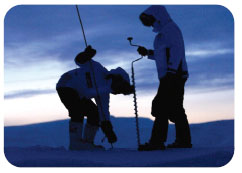 Temperatures are oscillating between -16 c and -30 c , sometimes within an hour...All the base windows look south and we can see beautifully-lit mountainous horizon, with darkened clouds fired by the extended six-hour 'sunset' between 9 am and 3 pm. The sun went down for the last time here on October 21--will not to be seen again until next spring...Ann and Joao were out all morning scouring Slidre Fjord for ice thicker than the "young ice" (frozen since September 15) thar now covers 99 per cent of the fjord. They returned..having found an old ice floe/pan locked into the young ice, about 2 km from base... they found that this all-year ice was 3-5 m thick.