'Avoiding controversy is crucial for the GEF'

Mostafa K Tolba , has been an influential figure in the global environmental arena, and has monitored the state of the world's environment. For 17 years he served as the executive director of the United Nations Environment Programme. During the GEF Assembly in Delhi, he spoke to Premangshu Ray on the role that the GEF should play in the future

'Avoiding controversy is crucial for the GEF' 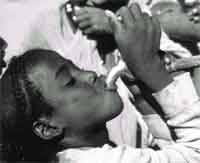 What should be the future vision of the GEF? What are the areas that it should focus on?
There are two things. The first is the issue of land degradation. I am not satisfied with the compromise formulation (in the assembly statement) defining the linkages between land degradation and gef focal areas, or to increase gef support for activities to combat land degradation, instead of making it a focal area itself.

You have stressed on the increasing points of conflict between nations on the issue of sharing water. How can we resolve this?
When a particular river basin is being shared by two or more countries, conflict is almost certain as is also greater, unplanned usage of the water. We should get together in the United Nations and help the governments sharing a river basin and/or some other freshwater source to develop a cooperative land for optimum usage of water.There are methods of resolving conflicts related to water-sharing.

But are these projects within the category that the GEF will pay for, with respect to incremental costs?
This issue will continue to be controversial. The concept of incremental cost came about from the Montreal Protocol, which was established in 1991. I will give an example. Suppose an Indian plant has a life span of 30 years, and it produces chlorofluorocarbons ( cfc s). If after 20 years of operation the owner is prepared to forgo the remaining 10 years of the plant's life in order to get more expensive but eco-friendly technology so that cfc s are eliminated, should he be made to bear the financial burden himself? After all, his decision is going to benefit the entire world's environment. This is an incremental cost that you should not be 'punished' with.

Incremental cost is sensible in cases of fighting (global issues such as) ozone depletion, developing renewable energy sources and in conserving biodiversity, but not in project such as those involving watersharing. For these, we need bilateral donors or, perhaps, outside multilateral donors, with the GEF contributioning its jest share by financing the feasibility study of the project.

Measuting incremental costs for biodiversity or afforestation project is difficult. The GEF should define incremental cost separately in each of there fields to avoid controversy.

Birgitta Dahl had stressed - during the assembly - that we should conceive of programmes to convince governments that it is indeed possible to 'do away' with incremental costs entirely.
She has used more straightforward language than the essentially diplomatic language of the gef . In some cases, it is easy to assess the incremental cost. But in other areas this is not easy or possible. So the gef should adopt a method to ensure that a certain percentage (of the project cost) is provided to the deve-loping countries in return for their services to the international community.

You had stressed that mainstreaming (applying the criteria of environment protection for non-GEF projects by GEF implementing agencies) is complicated and risky. Do you see any danger in it for the developing nations?
Mainstreaming can mean a hundred diffe-rent things to a hundred different people. To reach a real agreement, it is vital to define and understand mainstreaming. And, introduction of terms that are ambiguous or elastic, can mean danger for the gef .

It has been said that there are no real incentives for the developing nations to do anything. What should the GEF do to provide such incentives?
I disagree with this statement. Look at Egypt. If we have sea-level rise and climate change, we'll lose almost 75 per cent of our most fertile land. This is an incentive in itself. We should ensure that each one of us does his bit to prevent this from happening. The uk and the usa might be responsible for 75 per cent of the total world co 2 emissions. But, about 15-20 years hence, the developing nations will be producing more co 2 than them, as by that time they would have cut their emission levels. And even then we will not have the finances to tackle these environmental pro-blems. So the incentive is simple - survival.

What is the perspective of s of the South?
These ngo s are perhaps closer to each other than the governments are. They are definitely not biased in their concerns, while the governments focus on their respective interests.

Are you satisfied with the assembly resolution?
It is well-balanced and carefully drafted. One cannot always expect something unified on an issue that concerns more than 100 nations. But if one is careful enough, one can read one's own interests between the lines.

I am pleased to see that, for the first time, the problem of land degradation has been mentioned. But another step is needed to make land degradation a focal area for the gef , and that is to get finances. Then land degradation can become the gef 's fifth focal area. What has happened so far is a slow move, but a move nonetheless.

What would you have included in the resolution which is not there now?
I would have put land degradation more forcefully. It's time the gef looked into it more seriously. I would have also liked to stress streamlining of operations. The implementing agencies should cut down on the time taken between approval of a project and its implementation. The longest time is usually taken by the World Bank. But the managing director of the bank has promised to expedite this process.