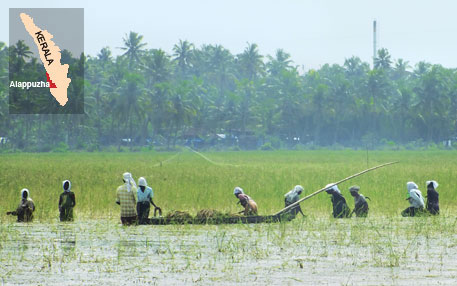 Harvest of pokkali rice in Kerala’s Ezhupunna village, which began on October 27 and lasted three weeks, was nothing short of a local event. After all, the indigenous, saline and flood-resistant rice variety was cultivated in the village after 25 years. People in the village had to wage a long battle to be able to cultivate the crop once again.

The 56-hectare (ha) plot where farming was restarted was part of a field where pokkali rice was cultivated traditionally. But for over 25 years, it had been under the control of powerful contractors who take land on lease from local farmers for practising prawn farming round the year.

The protests started in 2009 by a group of 28 people from the village. None of them is a farmer owning paddy fields. “But round-the-year prawn farming affected many of us,” says Benny Kalathil, who works in a motor workshop and is an activist with the Pokkali Samrakshana Samara Samiti, the group leading the agitations. “This is a historical victory,” he says.

The round-the-year prawn culture in coastal areas causes high salinity in the soil, groundwater and air. Saline winds make bricks in walls brittle and they start to crumble. It also adversely affects homestead farming, water quality in open wells and livelihoods of agriculture labourers and inland fisherfolk, say the activists.

Pokkali rice is grown in the coastal areas of Alappuzha, Ernakulam and Thrissur districts in Kerala. In this unique organic farming practice, one season of rice is alternated with another season of prawn culture. No chemical fertiliser, manure or pesticide is used in the process. Preparations for cultivation starts in mid April. Seeds are sown in early June at the onset of the southwest monsoon and the crop harvested in early November. The sowing, transplanting and harvesting take place when the salinity of water in the fields is at the lowest. From mid-November to mid-April, when the salinity is high, prawn farming takes over.

“The southwest monsoon and tidal action in the Arabian Sea are the most critical factors in the pokkali farming system,” says V Sreekumar, scientist with the Kerala Agriculture University’s Rice Research Station at Vyttila in Ernakulam. “The high salinity of waterlogged fields caused by the uptides is washed off during the heavy southwest monsoon. This wetland ecosystem is unique and fragile,” he says.

In view of the uniqueness of the system, pokkali farmers have received Geographical Indication certificate in 2009 and the central government’s Plant Genome Saviour Community award 2011.

Pokkali fields in these three districts have shrunk from 24,000 ha to 5,000 ha in the past two decades, says a state government committee headed by B Madhusoodana Kurup, vice-chancellor, Kerala University of Fisheries and Ocean Studies. The committee was appointed last year to suggest measures to sustain the rice-prawn farming system. However,Ã”Ã‡Ãªout of the 5,000 ha of pokkali fields currently only 1,000 ha are being used for rice farming, says the committee. Main reasons for the shrinkage are shortage of farmers, fields being used for purposes other than farming and lack of policies for sustaining the unique system.

Revival of the pokkali farming practice was not a concern of the group when it started the movement. “Our primary concern was the damage our houses suffered from round-the-year prawn farming,” says Verghese K A, another activist. “We have to repair our houses frequently and spend about Rs 10,000 every year,” he adds.

When their complaints to government departments and local administrative bodies went unheeded, they formed a residence association and joined hands with other groups fighting for similar causes. But the movement changed course in 2011 when Francis Kalathunkal, engineering professor at K R Gouriyamma College of Engineering for Women, Thuravur, and convener of the Pokkali Protection Forum in the adjoining Ernakulam district joined them. “We felt the movement should address conservation issues rather than fighting against individuals,” says Kalathunkal. “Our perspectives broadened when we started studying new aspects of pokkali farming and the fragile coastal ecosystems,” says Benny.

Restoring pokkali farming was not easy. “The nexus between politicians and big contractors was very strong. They even threatened our lives,” says Benny.

But nothing deterred the group. In April this year, N Padmakumar, the new district collector, responded to their appeals and held rounds of sittings with agriculture and fisheries officers, land owners, prawn growers and people’s representatives. In one such meeting in May, the prawn lobby agreed to lease out land and challenged the activists to prove the viability of pokkali farming.

The protesters accepted the challenge and were handed over the fields at the end of May, when the monsoon had already started. There was no time to prepare the fields. To pump out the saline water, a 50 horsepower motor and electricity connections were needed. “The prawn lobby even influenced the Kerala State Electricity Board to not give us power connection,” says Verghese. They got the connection on June 26, “just because the collector was to inaugurate sowing of seeds the following day”, recalls Kalathunkal.

The next hurdle was seeds. No one in the village had them. The local Krishi Bhavan which had promised to supply seeds failed to do so. However, the activists managed to buy 4.5 tonnes of pokkali seeds from a women’s cooperative for Rs 25/kg. The group managed to bring in students from two nearby collegesÃ”Ã‡Ãªto help in the entire process. “It was fun and a learning experience for them,” says Kalathunkal.

To raise money, the group decided to issuing bonds. The value of each bond was kept at Rs 1,000. “It’s just an informal arrangement in which friends and well-wishers can extend a helping hand,” says Kalathunkal. The bond holders will be paid back their money without interest after six months or they can take pokkali rice worth their investment in lieu of money. So far 120 people have bought the bonds and the committee has raised Rs 3 lakh.

The activists have spent Rs 8.5 lakh on farming and harvesting. The state government has allocated Rs 27 lakh for encouraging cultivation of organic varieties of rice such as pokkali and njavara in this year’s budget. The Pokkali Samrakshana Samara Samiti has received Rs 1 lakh from the government. According to Kalathunkal, much of the government funds meant for unique rice varieties remain unspent.

This year’s harvest is only 10 tonnes. “But we will not incur loss since the government offers an incentive of Rs 30,000 a hectare for cultivating fallow rice fields,” says Kalthungal. The paddy will be processed and sold at Rs 50 a kg in the market. Since pokkali is organic, it has a good demand, say activists.

The group can take forward their experiment only if they get the land on lease in the coming years too. “But we are not sure about this,” says Kalathunkal. To sustain the pokkali farming, the government should issue licence for prawn farming only if rice is cultivated in one season. “Being an organic rice variety, pokkali will not get any subsidies by the government. So the government should give a support price of Rs 50 per kg,” says Benny. At present, the support price for paddy is Rs 17/kg.

To tide overÃ”Ã‡Ãªseed scarcity, pokkali should be cultivated as the second or third crop in other parts of the state and the Kerala Seed Authority should set up a pokkali seed bank, says Sreekumar. “Many have mistaken pokkali as a rice variety that grows only in saline water. It will very well grow in other regions too,” he adds.

The activists have pinned their hopes on the expert committee’s recommendations urging the state government to declare the pokkali villages as Heritage Villages and find them a place among the Global Heritage Village.