Integrating indigenous knowledge in joint forest management projects is an essential prerequisite for the success of such programmes, but years of neglect has diluted the centuries-old practices 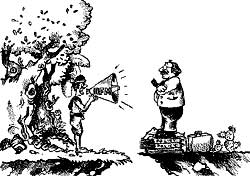 SUSTAINABLE forest management has been practiced since time immemorial. The Arthashastra records management of forests and wildlife during Kautilya's rule. There were 18 forest laws during the Mauryan period. But the centuries-old indigenous knowledge, developed after careful observations of natural and physical environments, is today a victim of neglect or has been diluted by modern practices. To address the need to save Indic traditions, practitioners and academicians gathered at the Indian Institute of Forest Management (iifm) in Bhopal recently.
According to K F Weirsum of the department of environmental sciences, Wageningen University, the Netherlands, Indic traditions are observed in two aspects -- one that includes three types of values such as encyclopaedic or that related to their knowledge, efficiency related to the social-cultural milieu, and emancipation related to their empowerment. Referring to the joint forest management (jfm) schemes, he says that solely basing it on the encyclopaedic value can disempower local communities from their traditions and is insensitive to the cultural and institutional settings within which indigenous knowledge evolved. The second, practical view focuses on protection of forests, small and large, and isolated trees, too.

Even in areas where indigenous knowledge in taken into consideration, experts say that it is insufficient. "We are just taking the knowledge and trying to integrate it not knowing what it means for the people concerned," says Klaus Seeland, chairperson, Forest Policy and Forest Economics, Swiss Federal Institute of Technology. Local institutions that conduct research in tribal habitats should take social, ecological and religious aspects also into consideration. "One should have a clear concept of tribal knowledge when we integrate it in activities like jfm," says Seeland.

For instance, when applying indigenous knowledge to jfm , numerous problems can arise if local conditions are not taken into consideration. " jfm is a single model imposed everywhere and could be a recipe for disaster," says Ashish Kothari of Kalpavriksh, a Pune-based non-government organisation. "We should interact and learn from the people and not only try to teach them," says D N Pandey, coordinator, International Network on Ethnoforestry and a faculty member at iifm .

Thousands of researchers across the globe produce enough for use of forest officials. Yet, the problem of deforestation looms large. "The basic reason for this decline is that we have ignored the vast quantum of local knowledge on forests," says Pandey. In his opinion, this knowledge can be incorporated into modern forestry by introducing it in the conservation and development of agroforestry systems and rehabilitation of wastelands, among other things. For this, interaction with the local people is an absolute must. "It is better to sit and work without any hierarchy. We also have to find out how we can empower the local people" says Kothari.

Kothari presented seven case studies from South Asia, including Nepal and Sri Lanka, where traditional knowledge practices helped to empower the local people. Others present at the seminar also highlighted interesting case studies from across the country where use of indigenous knowledge has benefited local people. Pradyut Bhattaracharya from iifm, for instance, presented a case study of indigenous practice of medicinal plants in Betul district of Madhya Pradesh, where the ethnomedicinal knowledge have been documented.

Keeping in mind the interest, or rather the lack of it, shown by government agencies and other decision-making bodies, B P Pethiya of the faculty of financial and project management, iifm, suggested 'explicit use' of the words like indigenous knowledge in the National Forest Policy. He suggested that setting up of an indigenous knowledge cell in the Union ministry of environment and forests would further help to enhance its significance.

Pandey suggested the use of indigenous knowledge in landuse practices, preservation and conservation of nature and in developing new agrotechnologies, while Kothari suggested a training programme on local knowledge for educational institutions, bureaucrats and decision-makers.

Despite years of neglect, there is hope in areas where indigenous knowledge is still respected or where revival is taking place. Two such places are Jardhagaon and Medha Lekha villages in Uttaranchal and Maharasthra, respectively.