The state of regulation 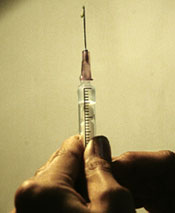 Most problems that bedevil the government's immunisation programme arise from a lack of regulation and confusion: on the ground and in the policy sphere. The lack of regulation is especially problematic given that the market and the big pharmaceutical companies play a big role in shaping global and national priorities.

Chicken pox provides a good example of unregulated marketing practices. In July last year, Ajay Gambhir, honorary secretary of the ima Academy of Medical Specialities, pointed this out in a letter to P K Hota, secretary, m o hfw. He pointed to an advertisement run in the national media by a company manufacturing chicken pox vaccine. The offending advertisement said "protect your adolescent child from marks on the face by taking chicken pox vaccination". "Some of these companies are directly approaching schools ... to promote use of their vaccines, which is highly unethical," was Gambhir's gloss on the advertisement.

Presumably, what Gambhir meant, apart from what he explicitly stated, was that vaccination is to protect children from the disease and not pockmarks -- vaccines are not cosmetic products. But more important than what the vaccine-maker said, was what it did not. Experts say that chicken pox contracted in childhood has fairly mild effects, but in adulthood the disease takes a much more severe form. Further, doctors say, it is not known for certain for how long vaccination provides protection. As Gambhir notes, accurate information should be made public.

It's not just advertising of this kind, sharp marketing practices of other kinds abound: as in vaccine-makers pushing vaccination programmes in schools. This is not just a matter of marketing but also an abdication of the responsibilities of the state. In connection with the lack of regulatory provisions in the proposed amendment on advertising to the Drugs and Magic Remedies Act, all Ashwini Kumar, drugs controller general, had to say was it did not matter since vaccines were administered by doctors. This cavalier attitude is pervasive.

A lack of regulatory engagement is characteristic of the global vaccination regime as well. Take a blatant case. Merck is a representative on the gavi board. Merck is the biggest manufacturer of the Hib vaccine. And gavi is in the forefront of the push-Hib campaign. Not all cases are so blatant but they are damaging nonetheless.

There is no place for navet in evaluating the ethics of the vaccine trade -- to expect altruism to be the organising principle is pointless. Only strong regulatory regimes can work -- but, then, even that sounds a bit like something from cloud cuckoo land.