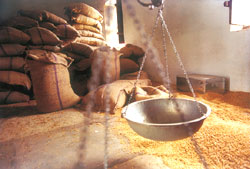 Let us now consider the larger terrain in which the results of the surveys must be understood. It is clear that from the mid-1970s onwards, nutrition -- the nourishment of the human body -- has become an increasingly absent factor in the development process in India, both in terms of how the process was envisioned or planned for and how it actually unfolded over time. The balance whereby the ecology of the human body renders itself sustainable has, over time, degraded. It has degraded to the point that today the country faces a double burden. Even as rural India struggles unsuccessfully to shrug off an older legacy of undernourishment, urban India -- firmly a in the lap of a globalised diet consisting of fats and sugar -- tries to come to terms with overnourishment, and the ill-health that too much of bad food has begun to lead to. Both are forms of malnourishment; that they co-exist today points to a failure so systematic that the question must be asked: surely the Indian state could not have intended its people to be so burdened?

Credit must be given where it is due. There is no doubt that the goal of attaining adequacy in food production -- the cornerstone of India's food policy since Independence, and manifested in the green revolution -- ensured that by the early 1970s India was no longer burdened by famine. PEM, or protein energy malnutrition -- in its two most common forms, marasmus and kwashikor -- among preschool children was endemic to this country 50 years ago; today it has been controlled. The NNMB survey reveals that in terms of weight for age, the proportion of severely malnourished children -- another legacy of the colonial policy of using the best cultivable lands to grow commercial crops such as cotton, jute, oilseeds and opium for export -- reduced from 15 per cent in 1975-1979 to 8.9 per cent in 1996-1997. Of course there has been progress.

The green revolution ensured that by 1980 India had become self-sufficient in foodgrains. By this time, however, it had irrevocably transformed the linkages of food, technology, ecology and culture within which people lived their lives. Its exclusive focus on a cropping pattern hell-bent on growing wheat and rice; its creation of input-intense agriculture that by the mid-1970s ushered in rapid commercialisation; and its focussed ignorance of pulses, coarse grains, fruits and vegetables led to skews whose perverse nutritive outcome is still mirrored in the surveys.

Consider one: the existence of the lowest rural average nutrient intake, in the nss survey, in relatively high per capita income states such as Gujarat, Maharashtra and Andhra Pradesh. The low intake is related to a fall in the consumption of cereals in rural areas in these major states. While local cultural preferences could be a reason for this fall, it is also a fact that, among major states, these have the lowest per capita production of cereals. In other words, foodgrain has to be brought in, thus increasing its prices and keeping it out of the reach of people. Clearly, people in these states are suffering from the effects not only of price movements of food, but also compromised local food security. Indeed by 1980, even as national food security came within the grasp of the Indian state, it slipped out and away in the form of local and regional nutritive insecurities, especially among the poor.

The 1980s and 1990s were a time of rapid changes in agricultural planning. Even as the green revolution exhausted itself, leading to stagnating rates of growth in foodgrain yields, the government began to promote the industrialisation of agriculture. Farmers were asked to diversify into cash crops and produce crops that were suitable for export: tomatoes in place of wheat, flowers in place of rice, or durum wheat (used to make bread). The so-called liberalisation of the Indian economy in 1991 was both a catalyst to the process, and a booster. It ensured the canonisation of agribusiness (see graph: booming agribusiness in India). It ensured that the small and marginal farmer could now be ignored without guilt. Latching on to increased incomes and new aspirations among a rapidly growing urban middle class, it used the promise of cheap and healthy food available off the shelves of superstores to sound the death-knell of a nutritively balanced body.


If it is the avowed objective of food policy to ensure adequate supply of food to people, then in the last two decades, the continued reduction of the definition of food to 'foodgrain' and consequent lack of focus on wholesome diet provision has meant -- among other things -- that pulses, vegetables or even fish have remained consistently unaffordable for the greater part of the Indian population.

If it is the avowed objective of food policy to ensure a minimum supply of foodgrains to consumers at affordable prices, then in the last two decades, the public distribution system (PDS) -- set up primarily to tackle large-scale nutritional deficiency -- has become such a shambles that it can no longer be considered a viable instrument that can take care of even the minimum nutritive needs of people.

Nothing illustrates this tendency better than the targeted public distribution system, introduced in 1997. Neither has it reduced the government's subsidy bill, nor has it provided support to the poor. The reasons lie in the exclusion of a large number of deserving families from the below poverty line category; the inability to check corruption in the face of significant gap between the above poverty line and below poverty line prices.

But above all, the policy insistence on maintaining that the basic rationale for PDS consists of preventing acute hunger and malnutrition has completely divorced this instrument from the reality of the changes in the lives of the very people it purports to target. PDS has nothing to say, and cannot do anything, to tackle the insidious long-term undernutrition the surveys are a proof of.


So it is that the NNMB survey points to the existence of 62.3 per cent underweight children in its sample. 57.8 per cent children were stunted, a decrease from 78.6 per cent in 1975-1979, but high enough to be a cause of worry. Other studies, too, point to persistent health problems, of both the undernourished and overnourished kind:

• A study by the department of women education, Indira Gandhi National Open University, New Delhi, in a Delhi slum shows that children aged 9-36 months had high prevalence of anemia and were deficient in iron as well as vitamin B12 and folate

• A survey of tribal children aged 6-12 in the Dhariyawad block of Udaipur in Rajasthan showed that 77.4 per cent were clinically anemic

• A study carried out in Ludhiana city, Punjab, showed that high consumption of fat (50.3 3.2 gm per day), roots and tubers (76.8 6.4 gm per day) and milk (341.7 25.5 gm per day) were the major causes of obesity in children. A similar study by the All India Institute of Medical Sciences, New Delhi, linked obesity in one of Delhi's elite schools with junk food and lack of outdoor activity

We are not eating well. It is showing.