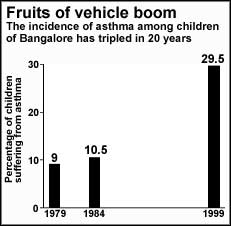 Bangalore is a relatively green city. There are no big industrial units in the immediate vicinity. As with most other metros of India, vehicular emissions are the most important cause of air pollution. According to B Shivalingaiah, chairperson of the Karnataka Pollution Control Board (kpcb), there are about 1.4 million vehicles here -- about 60 per cent of the vehicular population in Karnataka. More than 60 per cent of these are two- and three-wheelers running mostly on polluting two-stroke engines. About 250,000 vehicles are added every year. All this means that 200 tonnes of emissions are released in Bangalore every day. The average spmlevel in the city in 1998-99 was recorded at 233 g/cum, while the permissible limit is 140 g/cum.

I have written to the government departments to clean up their act before they take on the people," says he. Most people interviewed by Down To Earth said the government vehicles are some of the dirtiest. "There are rule books that say which clause of which law can be applied for what. If nothing happens, I will have to invoke these rules," quips Shivalingaiah.

There are five monitoring stations in the city where ambient air quality is measured regularly," says Shivalingaiah. He claims there are five display units that show levels of spm, oxides of nitrogen and sulphur dioxide on a weekly basis. He mentions that a mobile lab is being set up with assistance from the World Bank.

The board also seems quite keen about creating mass awareness about air pollution, along with the other aspects of the environment. The chairperson addresses citizens on a local television channel through a programme aired regularly. "We are working with children in awareness camps. We want to intensify effort with the help of voluntary agencies."

Other government departments, however, do not always back kpcb's efforts. For example, there seems to be no study on the impact of air pollution on human health. People can hardly be expected to take steps to curb air pollution if they do not know about how it destroys health and kills. Even if there are any studies, there seems to be no effort to publicise them. The result is simple: public participation in pollution control is almost non-existent.

Government agencies claim they are taking several measures to combat air pollution. Shivalingaiah says kpcb has created a section called the Parisara Vahini. Its units are fitted with public address systems and they station themselves at strategic locations of the city to communicate to the public various aspects of air pollution, like adulterated fuel and maintenance of vehicles. They also check vehicle emissions at the five entrances to the city. However, justice M F Saldanha of the Karnataka High Court, who ordered the transport commissioner to address the issue of polluting vehicles from neighbouring states, told Down To Earth that the checking of vehicles at the entering points is not being carried out properly.

Saldanha has passed quite a few orders with regard to air pollution control, and an important order dealt with fuel adulteration. "The practice is rampant among three-wheelers and diesel vehicles. Some action was taken by the authorities after the order, but the practice goes on because of collusion between the authorities and the adulterers," he says. The turnover from this nefarious trade is Rs 1.2 crore per day, he estimates. There seems to be confusion about which agency should tackle the problem of fuel adulteration. The police, kpcb and the transport department say this problem lies in the jurisdiction of the food and civil supplies department. As Sadashivaiah points out, there are no laws regarding the solvents that are used in adulteration of fuel. When contacted, the food and civil supplies department said that the department has taken action whenever necessary. However, as Khaleed, an autorickshaw driver, pointed out, adulterated fuel is still sold openly at several places of the city.

Saldanha has also ordered all three-wheelers of the city to be converted to lpg. "The transport department cited some technical reasons and the decision is stalled for the time being," he says. Shivlingaiah, however, says about 20 per cent of the private vehicles are running on lpg. He points out that lpg is not yet approved by the Centre and a lot of bureaucratic hurdles have to be overcome: "Once the Union government approves the use of lpg, we can do the paperwork and pave the way for its wider use," he says.

He has reasons to lament: "Although this data has not been published, I have found out that there is a 28 per cent increase in the respiratory diseases among people of Bangalore in the past 14 months or so." Physicians have found that 8-10 per cent of all newborns have to be kept in respirators. "Physicians tell me it is because the newborns cannot get acclamatised to the polluted air outside," says Saldanha. "The picture is not very rosy," he laments.

Saldanha states that though the judiciary keeps getting complaints and public interest petitions from time to time, most of them are either dismissed or are pending. "The judiciary, too, is not doing justice to the cause of controlling environmental pollution," says he. Asked about the response of the public against air pollution, he says there is virtually none.

The greatest failure of the civil society and the government seems to be an inability to communicate the available information on health effects of air pollution to the public, the main reason for the absence of a well formed public opinion against air pollution (see box: A lone seeker). All the claims of kpcb about informing the public fall flat in view of this.