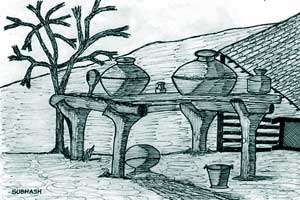 Gujarat, the hub of business activity, has large pockets that development seems to have given the go-by -- mostly the eastern parts of the state, inhabited by tribal communities. Ganesh Devy, who has been working at setting up 'water banks' in one such area, says, "Lopsided governmental policies have led to these areas being economically and educationally the most under-developed parts of the state. The people here have been forced to the realisation that they must resort to self-help."

Three years into working with the tribals of Chhotaudepur, Bhasha, Devy's Vadodara-based non-governmental organisation (ngo) realised that self-reliance is most critical when it comes to water -- the most precious of all resources in Indian villages. There was, Devy realised, no need to look outside for answers. The tribals themselves were a storehouse of information and knowledge; all they needed was a little support.

This was the beginning of the 'water bank' concept, and the programme 'maali', which in the local language means 'sacred space for water storage'. (see box: The maali project in action) The maali project covers nearly 24 villages, with a total population of about 45,000 people. The total land under cultivation in these areas is about 250-300 hectares (ha) per village (a total of about 7,000 ha), with about 70 per cent of the farmers holding less than one ha.

The maali project is based on the concept of voluntary participation in the management of natural resources. Nima, who is closely associated with the water bank project, says, "We hold monthly meetings, and all decisions are taken in these meetings. Each maali is an independent and democratic body, which elects a pramukh and a mantri (chief and deputy) for administrative convenience." Those who subscribe to the bank have the right to take part in all decision-making processes. Devy explains further, "The tribals arrived at certain ground rules after much discussion and debate, and now they keep to those rules. This is the secret of the maali project's success."

The group decides collectively on reconstruction or utilisation of an existing water work or creation of a new one. Thereafter, the cost is determined in consultation with a field supervisor, who is designated by the Bhasha centre. Nearly 25 per cent of the total cost of construction, creation and maintenance is to be collected by the group on a pro-rata basis. The collected amount is deposited in the group's bank account. The Bhasha centre helps the group with obtaining government grants, loans and international funding.

Field supervisors monitor the working of the maali groups. Volunteers are chosen from among tribals educated enough to liaise with government officials and funding agencies. These persons have the added advantage of being acquainted with the topography and language. The Bhasha centre also undertakes short-term training courses for orienting the pramukhs and mantris elected by the subscribers.

The maali project is working towards increasing the real income of at least 70 per cent of the population by 150 per cent over a period of seven to ten years. In the cyclic droughts that Gujarat is faced with, the villagers will have surplus foodgrain and fodder to fall back on. Nima, however, sees a flipside to the potent weapon that the self-help groups are becoming. "Somewhere down the line, it is giving rise to a new social leadership and, in a way, breaking up the authority of the panchayat."