Banks expand arms, but not through branches

Banks expand arms, but not through branches 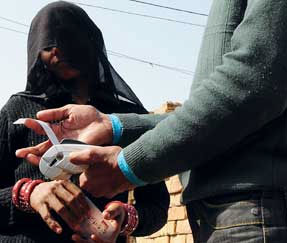 Technology plays a crucial role in making banking services available to the rural poor. And banks are exploring options. To begin with, the Reserve Bank of India (rbi)  has permitted banks to use intermediaries such as cooperatives or microfinance institutions to provide services in places banks cannot reach. These intermediaries, called business correspondents, could also be retired bank or government employees, or not-for-profit companies registered under the Companies Act. The rule is: hire and train correspondents in basic financial services and provide them with the required technology to complete transactions.


An undergraduate looking for work earlier, there is a new confidence in his gait—Lal is the district’s first business correspondent. He transacts with 1,400 daily wagers whom the bank has issued biometric smart cards, and earns about Rs 3,000 per month. The smart cards, which resemble debit cards, contain information such as name, age, address, account details and fingerprint impressions of the beneficiary.


There is also his or her digital photograph embossed on the card.

When Lal reaches a village he first activates the machine so that the smart card can be inserted. The device, imported from the US, requires a fingerprint to verify the beneficiary. “Since labour often alters fingerprint impressions, an option for all 10 fingerprints exists.

Some of us also carry Vaseline for extreme cases,” Lal said. After verification, Lal hands over the cash. The machine prints two receipts; Lal keeps one, gives the other to the beneficiary. The information is relayed to the bank through the smart card reading device.

Transactions can range up to Rs 20,000 and as a rule smart card holders cannot conduct direct transactions with the bank, the Oriental Bank of Commerce in this case. In keeping with rbi guidelines, the bank has hired Financial Information Network and Operations (fino), a not-for-profit company in Mumbai, to issue smart cards and hire business correspondents.

While the smart card device is available on a rent of Rs 9,000 each year, each smart card costs Rs 112. The bank bears these costs. rbi reimburses Rs 50 per smart card to the bank. Under the pilot, which started in August 2009, the bank has issued smart cards to mnrega beneficiaries in 13 of the 20 branches they have in the district.

The advantages are obvious. The bank’s reach has expanded because of the business correspondents, and time is saved in carrying out the transactions.

For the women of Periyakanganankup-pam, a village in Cuddalore district, all roads lead to the atm. Fifteen months after the district started paying mnrega wages through debit card linked zero balance accounts; the women have mastered the art of withdrawing their wages from the atms. These are different from the cash dispensers found in cities—in biometric atms the second level of authentication is one’s fingerprint, not personal identification number. 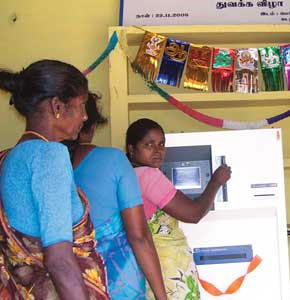 The authentication leaves no scope for fraud because no one except the beneficiary can withdraw money. “My wife gets to decide when to withdraw and how to spend her earnings. She has saved over Rs 2,000,” said Mahalingam. “Earlier, she would bring home all her mnrega  earnings to me,” he added.

The atm operates in Tamil, but for the elderly and the unlettered, help is at hand. Sudha, a resident with a school-leaving certificate to her credit, manages the atm and helps people withdraw their earnings. The panchayat has also empl-oyed a resident who collects weekly workers’ list and their due wages from the worksite, and deposits cash with the bank. The bank, sbi, sends its staff to the village to put in cash in the machines.

Periyakanganankuppam was one of the five village panchayats in Cuddalore district chosen for the biometric atm pilot. The pilot was launched in November 2008, but one village was excluded because it did not have wireless access. Two others dropped out because the bank failed to process applications for saving accounts in time for the pilot. “We did not have enough staff,” said K Venugopal, branch manager of Cuddalore sbi.

During the pilot the Cuddalore block administration paid Rs 12.25 lakh through 675 bank accounts in these two panchayats. Rs 6.05 lakh was paid as cash to non-account holders. The Rural Tele-Banking Initiative under iit Madras provided the technology. And, Periyakanganankuppam, with 445 account holders, and Pathirikuppam, with 230 account holders, successfully completed the pilot in May last year. The plan is to upscale the project to all 145 villages in the Cuddalore block.

With a successful pilot in Tamil Nadu, the sbi is experimenting with a different technology in Orissa.

It’s a state-of-the-art mobile phone. It is blue tooth customized and grps enab-led, which means one can use the Internet on the mobile phone. A fingerprint scanner-cum-printer is connected to the phone. It is used to enrol beneficiaries, as well as to make payments.

Zero Mass Foundation, a not-for-profit company in Mumbai, is the business correspondent for Orissa’s pilot project which started in November 2009. The foundation hires representatives in villages, whom they call customer service providers.

Each beneficiary also has an identity card called the sbi tiny card. This carries details of the beneficiary, along with the zero security number, a unique id, which acts as the first level of identity proof (see box: It’s wage day). To ensure no malpractice, the device is voice enabled. It records the beneficiaries’ voices in it. But this is only during enrolment. Voice verification during transaction is not done but if there is a need, the option exists.

Usually, the junior engineer at the work site concerned sends weekly bills to the panchayats, along with the work schedule. The schedule lists the quantum of work and the due wages. The sarpanch and the customer service provider issue a cheque to the nearest sbi branch, along with a copy of the work schedule and the wages due. The branch credits the amount mentioned into the beneficiary’s account, which automatically gets transferred to the Zero Mass Foundation’s account. The foundation then transfers the money to the customer service provider who withdraws it and makes the payment.

Cost though is a deterrent and the reason the pilot project was restricted to 986 panchayats in Ganjam, Gajapati and Mayurbhanj districts, and one panchayat each in Bhadrak and Jajpur districts. The pilot was planned in 1,000 gram panchayats in 10 districts.

Bank officials conceded that because of these problems, except in Ganjam, things had not moved beyond the enrolment stage.