Developing countries have taken their first step towards breaking the US monopoly over the appointment of the World Bank president. On March 23, the Bank’s Board of Executive Directors announced three names to be considered for the presidential position. Two of them are from and nominated by developing countries. This is for the first time in its 68 years of existence that the Bank will hold a contest for the presidential position. Current president Robert Zoellick will step down at the end of his term in June. By April the Bank has to appoint a new president.

The developing countries’ candidates are José Antonio Ocampo, a Colombian national and professor at Columbia University, US, and Nigeria’s finance minister Ngozi Okonjo-Iweala. The US fielded Jim Yong Kim, a US national and president of Dartmouth College in New Hampshire, as its candidate on March 23, the last date for nominating candidates.

Surprisingly, the name of Jeffrey Sachs, an economist at Columbia University, US, did not figure in the final list. He was the first to be nominated by six developing countries. Earlier he had told Down To Earth: “It’s been confirmed to me that my name has been put officially into nomination by one or more of the governments that have publicly endorsed my candidacy.”

The key multilateral development banks and institutions—the World Bank, the International Monetary Fund (IMF) and the Asian Development Bank (ADB)—have unwritten law to appoint their heads from developed countries. The US nominates president of the World Bank, while a European heads IMF. The ADB president is always a Japanese. This despite the fact that these institutions are co-owned by countries and mostly do business in developing and poor countries.

The Bank, for instance, is owned by 187 member governments. But developing and poor countries where it does business do not have the decisive power in the Bank’s decision-making.

Each member country holds shares depending on the size of its economy. Unlike in the UN, the Bank does not follow “one-country-one-vote” principle. It has “one-dollar-one-vote” structure that allows richer countries to corner more votes to influence its decision-making. The US is the largest shareholder with 16.41 per cent of votes, followed by Japan (7.87 per cent), Germany (4.49 per cent), the UK (4.31 per cent) and France (4.31 per cent). The remaining shares are divided among the other members. All developing country borrowers have a combined voting share of 39 per cent. The 47 sub-Saharan African nations command less than six per cent of the votes.

To appoint a non-US nominee this time around, hundreds of civil society groups and governments of emerging economies like India and Russia have initiated an intense campaign. Malaysia, Kenya, Namibia, Haiti, Bhutan and Timor-Leste supported Sachs soon after he sent his application in early March. 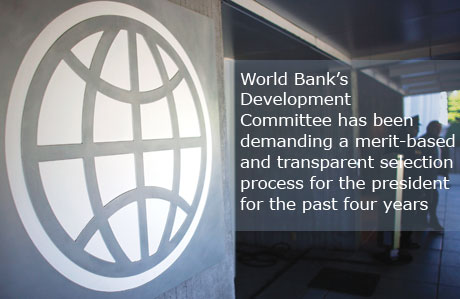 Foreign and economic affairs offices of India, Brazil and South Africa are negotiating on a common strategy while China is reported to have joined them. India’s External Affairs Minister S M Krishna says, “If in the past the US had representatives as head of the World Bank, it is now necessary for other countries to come out with suitable names of candidates who have the wisdom and merit to hold the post.”

During the G20 meeting in Mexico City in February representatives of the BRICS countries (Brazil, Russia, India, China and South Africa) put a common demand to reform the selection process and open it to all countries. “Candidates should be based on merit and not on nationality,” said Guido Mantega, Brazil’s finance minister.

The push for the reform has also come from civil society groups in developed countries. In a joint letter to the US, they have asked it not to pursue an only American nominee. Elizabeth Stuart of Oxfam, one of the organisations that signed the appeal, says, “The way the World Bank picks its president needs to change. The Bank only operates in developing countries, so any candidate not supported by a majority of these countries would plainly lack legitimacy.”

The Bank will conduct personal interviews with the three candidates to select the president.

Civil society groups, however, want the president to be selected by a majority of the member countries instead of “one-dollar-one-vote” policy. They add another condition: the president has to be supported by the majority of the developing and poor country members. Moreover, they demand the whole process to be transparent, which includes a public release of the position’s job description and required qualifications for the candidate. Jeroen Kwakkenbos of Eurodad, a network of non-profits in Europe, says the next president cannot be selected behind the scenes. “The second wave of global economic crisis is almost certainly going to start hitting poor countries very hard, very soon. The World Bank needs to be geared to respond with credible, legitimate leadership in place. The US should no longer seek to monopolise this position.”

Jesse Griffiths of Bretton Woods Projects, a coalition that monitors the multilateral financial institutions, says since 2008 the Bank’s governors have repeatedly promised a fair, merit-based and transparent selection process for the president. It is time for them to deliver on that promise.

The Bank’s own Development Committee, a key decision-making body, has been demanding the same for the past four years. In 2008 it said, “There is considerable agreement on the importance of a selection process for the president of the Bank that is merit-based and transparent, with nominations open to all board members and transparent board consideration of all candidates.” It reiterated the reform proposal on two occasions in 2010. It even clarified there was no need for any change in the Bank’s charter to adopt the reform. After all, there is no binding clause on selecting an American as president.

“World Bank should be a place to solve big problems, not a place that is just a source of contracts or an arm of the US diplomacy,” Sachs says.

Under pressure from emerging economies the Bank has already been changing its structure and voting share, though hesitantly. Its business character has undergone changes, triggering in-house churning. In countries like India, China and Brazil the Bank has long been overtaken by private capital flows as the main source of finance (see ‘World Bank gets jittery’, Down To Earth, July 1-15, 2011). India and China are fast emerging as the largest financiers in Africa, making the Bank almost irrelevant.

The campaign of developing countries to contest developed countries’ monopoly is not limited to the World Bank. Last year, IMF for the first time witnessed a challenge to European monopoly over selection of its managing director. Mexico nominated a candidate. India supported it.

But the historic attempt to bring about a reform in the World Bank’s presidential election may not turn out to be a lasting one. Given the decisive voting share, US nominee Jim Yong Kim has high probability to win.

“Unfortunately it seems as if the US is tied to an outdated notion of its national interest,” says Griffiths. Instead of pushing for merit-based processes for the heads of all international organisations, it seems determined to hold onto its outdated privileges, he adds. This is clear from the fact that the US did not support Sachs despite 27 Democrat members of the House of Representatives writing to President Barack Obama to nominate him.