Lung cancer is a result of the deadly cocktail of smoking, air pollution and poverty 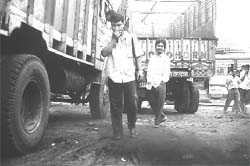 W hile lung cancer's link with smoking has been publicised, its link with air pollution is considerably underplayed. "Data do suggest that urban smokers are more likely to develop lung cancer than rural smokers, even after accounting for smoking behaviour (how heavily a person smokes, what kind of cigarettes are smoked and so on). Yet urban non-smokers do not appear to be at increased risk for lung cancer," said Dimitrios Trichopoulos and colleagues at the Harvard Centre for Cancer Prevention in Boston, usa , in a September 1996 article in the Scientific American .

"Taken together, such studies, emission inventories and chemical analyses of air samples from urban areas suggest that long-term exposure to high levels of air pollution could increase lung cancer risk by about 50 percent, especially among smokers. Diesel exhaust, which is probably more carcinogenic than non-diesel exhaust, has been proposed as a likely carcinogenic factor," they conclude. It is well known that Indian cities use a lot of diesel, and only one pollutant, suspended particulate matter, which is linked to diesel exhaust emissions, accounted for 52,000 lives in only 36 cities of India in 1995 (see 'Fatal attraction'; Down To Earth , Vol 8, No 1; May 31, 1999).

Tanja Pless-Mulloli from the department of epidemiology and public health at the School of Health Sciences, University of Newcastle, uk , coauthored a study entitled 'Lung Cancer, Proximity to Industry, and Poverty in Northeast England', which was published in the April 1998 issue of the Environmental Health Perspectives . "The association between raised lung cancer mortality and proximity to industry in women under 75 years of age could not be explained by smoking, occupation, socioeconomic factors, or artefact. Our judgement is that the observed gradient in women points to a role for industrial air pollution," the authors explain.

Ashutosh Pathak, oncologist at aiims who specialises in lung cancer, points out that getting a diagnosis itself is a major hurdle for the poor. "More than half the lung cancer cases that come to me are first treated as tuberculosis as the symptoms of the two diseases are very similar. Of the cases that do come to us, 80 per cent are already in advanced stages," he says. "The number of cancer cases being reported in the six cancer registries in India represent barely the tip of the iceberg."


"Cancer ultimately is a human condition, and therefore cancer occurs under human circumstances. And those circumstances include the physical environment, the culture of the people themselves, the social and economic condition of people, political circumstances, and also psychological and spiritual concerns." Thus, Harold Freeman, director of the department of surgery at the Harlem Hospital Centre in New York, usa , chairperson of the President's Cancer Panel, and a leading authority on the interrelationships between race, poverty and cancer. "If cancer occurs under those conditions, then it's not enough to understand carcinogenesis, if we ever get to understand that -- we should understand it in human circumstances and settings. Poverty has to do with lack of resources, lack of knowledge, poor environment, exposure to toxins, and lack of access to health care."

In India, cancer receives as little importance as poverty. "In a developing country like India, we cannot even hope to provide decent cancer treatment to all victims. Hence, it makes sense to concentrate on prevention of cancer," says Vinod Kochupillai, chief of the Institute Rotary Cancer Hospital at aiims , New Delhi. Just like the poor of India who cannot look beyond their immediate needs, the country's medical establishment is immersed in dealing with communicable diseases like malaria and tuberculosis which take a high toll on human lives, and does not pay enough attention to non-communicable diseases like cancer.

"There is a general impression that cancer is incurable and money spent on its research is a waste. But non-communicable diseases like cancer and asthma are going to become more prevalent as we industrialise and we have to give as much attention to these as to communicable diseases," says Guleria. "There is no major effort from the policymakers to counter smoking or air pollution. It is indeed sad that we know so much about pollution-related problems and yet do so little about it. It is time for drastic measures now," says Guleria.

Drastic measures will surely not come unless more is known about the state of the disease in India. If icmr cares one bit for its reputation and does not want to bear the blame of criminal neglect, it should get moving with the ncrp . It has to move quickly on its feet and publish data, which can then be used to develop a better strategy to deal with cancer. Otherwise, the curse of the dying poor will weigh heavy on it.

With inputs by Leena Chakravarty and Vibha Varshney