A proposed shipyard threatens the rich biodiversity of a south Goa bay, but government is unmoved 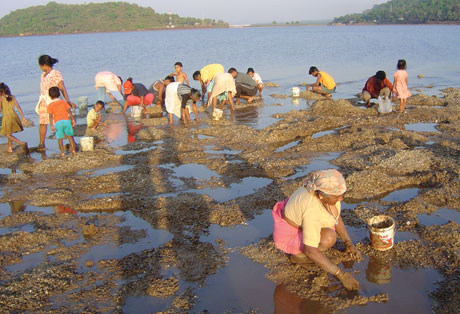 The Goa government’s reluctance to scrap a controversial shipyard project has left the 200-odd families of Chicalim village distraught.

In 2005, Bharti Shipyard Limited proposed to construct a Rs 250-crore shipyard on about 0.8 hectare of mudflats in the ecologically fragile Chicalim Bay in Mormugao taluka.

The Goa Coastal Zone Management Authority (GCZMA) gave its approval, planning to change the land’s status from no-development to industrial zone. This encouraged the shipping company to cut mangroves and fill it with dredged material. But the village panchayat rejected this proposal.

They had reason to cheer on March 29, 2010, when Panjim Bench of Bombay High Court ruled that GCZMA should reconsider its approval and involve people in the decision-making process.

But GCZMA sat over the court order for a year. It was only on April 4 this year that the authority submitted an undertaking to the court to keep its approval in abeyance. This followed a report by the National Institute of Oceanography (NIO) which said the shipyard will be harmful for environment. A reluctant GCZMA had asked NIO to study the project plan after a spirited agitation by those opposing the project. 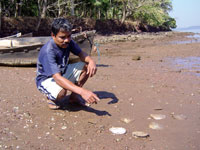 This relief for the people, too, may turn out to be brief. The GCZMA has referred the matter to State Environmental Appraisal Committee (SEAC), constituted by the Union Ministry of Environment and Forests. Committee officials say it is yet to receive a written communication. “A meeting will be scheduled as soon as we receive the letter,” says Mohan Girap, member secretary of SEAC. “We will act if the matter falls in our jurisdiction, else the case will revert to GCZMA.”

Spearheading the fight against the shipyard, Chicalim Villagers Action Committee (CVAC) says the shipyard will affect the lives of Chicalim’s fishermen who earn a monthly income of Rs 25,000-Rs 30,000 from the fish they catch in the Arabian Sea.

“The shipping giant projects the shipyard as a development gateway that would generate jobs for the village,” says Rui Manuel De Costa Araujo, CVAC secretary. But residents say wages from these jobs cannot be compared with the earnings from fishing. “The people will work as labourers and not earn more that Rs 175 per day,” says Cyril Fernandes, a resident of the village. “Ship building and breaking will lead to pollution and affect marine life,” says Marcos Lobo, a fisher. “It will have a direct impact on our livelihood.”

Chicalim Bay is the biggest asset of the village. Its water is rich in crustaceans like Mud Crabs, Fiddler Crabs and Pistol Shrimps. The exposed inter-tidal mudflats support wetland birds. It is also a breeding ground for a variety of shellfishes and is the only home to the Windowpane Oyster (Placuna placenta-Linne) in India. The mollusc, locally called mendios or kapis, is a protected species under Schedule IV of the Wildlife Protection Act. It gets its name from its translucent shell, once used in windowpanes. Its inner surface is smooth and glossy, and displays a brilliant pearly iridescence. When it was not registered as a protected species, its shell was used to make handicrafts.

But Bharti Shipyard Limited claims Chicalim Bay does not have the oyster. Slamming the claim, NIO said in its study that the shipyard’s presence can be detrimental to the survival of the rare mollusc. Besides, it will lead to air and noise pollution. During its study, the NIO team identified several metallic pollutants and traced them to the shipyard. The study was conducted by a team led by NIO deputy director Baban Ingole, an international authority on organisms living on or close to sea bed.

Because of the bay’s rich biodiversity, the range forest officer of south Goa coastline has written to the deputy conservator of forests (wildlife and ecotourism) to declare it a protected area.

Land in Goa is protected under Coastal Regulation Zone (CRZ)-I. But Michael M D’Souza, member secretary, GCZMA, claims, “Rules in Goa are different from those in other coastal states. Because of its small size, certain activities like agriculture, setting up bus-repair shops and small-scale industries are allowed in CRZ-I.” Asked if the activities included the shipyard, D’Souza declined to comment.

The CVAC secretary, stresses the government should apply Biological Diversity Rules, 2004, to conserve and promote biodiversity in the area. While the Union Ministry of Environment and Forests has not approved the site, it has also not re-classified the zone from CRZ-I to industrial zone. This makes the shipyard illegal, he adds. Bharti Shipyard Limited officials refused to comment.