Beating about the bush

Beating about the bush 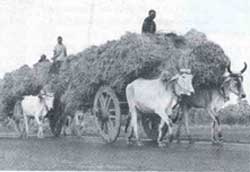 The international conference, BioResources '94, held in Bangalore from October 3-7, aimed to forge a new strategy to use biomass resources for sustainable development. However, at the end of the conference -- organised by the International Energy Initiative, the Biomass Users Network, the Commonwealth Science Council, and the Stockholm Environment Institute (sei) -- opinion was sharply divided on the question of availability of biomass resources in the developing countries and the technologies best suited to meet rural energy needs.

In a wider context, the conference was unable to make the connections between the various elements. Said Leach, "We attempted to do too much by taking bioresources as a whole. In the discussions on agriculture and afforestation we just skimmed the surface." While various themes such as the efficiency of cooking devices and the impact of fuelwood combustion on health, were extensive delved into, the conference failed to discuss the problems with community biogas programmes in developing countries. "In retrospect we should have said bioenergy is the core of the conference. The other areas should have been discussed with respect to their linkages," said Leach.

Case studies of rural biomass programmes from different parts of India were also lacking. Though the experience of the Centre for Application of Science & Technology for Rural Areas (astra) at Pura and Ungra villages of Karnataka were well chronicled and discussed, similar experiences from other parts of the country were missing. Besides, most of the case studies related to technological issues.

Anil Rajvanshi, director of the Maharashtra-based Nimbkar Agriculture Research Institute, added: "There are several proponents of village level biomass management who could have given a better insight into the biomass problem, but they were not included." A vast source of information went untapped as the work of Anna Hazare, Rameshwar Prasad, and P R Mishra -- experts in the field of grassroots development -- was not reported.

According to Robert Hamburg director of the us-based Omega-Alpha Recycling Systems, while focusing on success stories was important, valuable information could be gained if people learnt from the mistakes made in rural energy planning. "There ought to be a 'biomass energy mistakes conference' where people come and speak about the mistakes they have made. All these should be documented. Human beings learn more from their mistakes than anything else," he said.

"There has got to be lot of cooperation among groups that are pushing the biomass technologies," Hamburg adds. There is very little sharing of information and experience even among the Indian institutions that work in this area. One institution that has been extensively involved in energy and renewable energy technologies, the Tata Energy Research Institute, New Delhi, failed to turn up at the conference.

Of the 2 core positions that emerged at the conference, one centred on the perspective of developed countries and countries such as Brazil that have sufficient forest resources. Experts hold that these countries would benefit if large scale biomass gasification and cogeneration is used to produce electricity and also liquid fuels, which could be used for automobiles. Others, however, said that in the large number of developing countries where people depend on marginal lands and non-woody biomass for fuel and fodder, small scale gasification technologies, should be used to convert diverse, but abundantly available, agro-wastes and residues to electricity.

A Brazilian case study presented by Eric Larson of Princeton University, usa, talked of gas turbines fueled by biomass gasifiers as a "promising option for baseload electricity generation". However, sei's Gerald Leach said, "In Brazil it is fine to talk of highly managed, irrigated and fertilised plantations, giving 50-60 tonnes per ha annually. But when you talk of growing trees on marginal wastelands, as in India, you may have productivities of as little as 2 tonnes per ha.


Biomass, which comprises of wood, wood wastes such as lops and tops, grass and shrubs, agro-wastes and residues, aquatic biomass, and livestock wastes, continues to be the most widely used single source of energy in south and southeast Asia, particularly for cooking in rural areas. Of this, wood tops the list as an energy source. Paul Hassing, energy coordinator at the Netherland's ministry of foreign affairs, pointed out, "Presently, 55 per cent, or 3.15 billion of the world's population, uses biomass as the principal cooking fuel." This is expected to increase to 3.5 billion by 2025. For developing countries, on an average, biomass accounts for 38 per cent of the total energy consumption. And, among the lower income countries the share is as large as 80-90 per cent.

Harry Oosterveen of the Food and Agricultural Organization opined: "All the talk about advances in renewable energy sources and techniques ought to be forgotten as people in the villages simply cannot afford it." Wood is a local source of energy and does not deprive the government of scarce foreign exchange. Besides, many people derive an income from collecting, processing, trading or transporting it, he pointed out. "We still do not understand enough about these linkages to give the right incentives to the right people and make them use bioresources as a means to sustainable development," Oosterveen added.

Moreover, the top-down promotional strategies tried hitherto in developing countries, for the dissemination of renewable technologies had not worked, added Hari Sharan, president of the Switzerland-based Dasag Energy Engineering Ltd, referring largely to the Indian experience. The net result, he said, was a lack of involvement of villagers, inadequate and unsuitable training, operation and maintenance, immature designs, high capital costs, low prices of fossil fuels, and direct and hidden subsidies for the conventional power sector. L M Menezes, secretary in India's ministry of nonconventional energy sources, however, countered that his brief is to reduce government involvement in the renewable energy programme. "The wisest mode of deployment of bioresources for meeting energy is the decentralised mode," he elaborated.

While there was no dearth of good intentions, there was an absence of concrete plans and targets for coordination and cooperation between nations for bioresource development. Morris Miller, professor at the University of Ottawa, Canada, said, "The conference failed to discuss the financial, economic, and political aspects with regard to international scale problems and possibilities. We failed to draw up concrete programme initiatives. Small, sharply focussed meetings would be a more effective way to mobilise governmental and private funding, to help realise the great contribution that bioenergy could make towards improving both living conditions of the rural poor and the global environment."


Phil LaRocco of LaRocco Associates, while acknowledging that the conference succeeded in establishing bioresources as a concept, the objective of putting it on the global agenda and subsequently bringing it to centre-stage was not achieved. Moreover, far more needs to be done in terms of motivating people to take specific initiatives in respective countries and making donor agencies focus on specific successes.

Interestingly, there were 2 other international conferences on the same theme, taking place simultaneously in Europe and America: the European Conference on Biomass for Energy, Environment, Agriculture and Industry, in Vienna, Austria, and the Sixth National Bioenergy Conference, Bioenergy '94, in Navada, usa. Participants at the 3 conferences exchanged notes on the proceedings through electronic mail.

However, while technological marvels such as information highways were accelerating international information flows, BioResources '94 suffered from a lack of adequate information at the grassroot level.