How some villages stayed afloat even as neighbouring lands parched 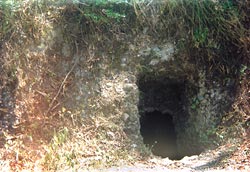 Four consecutive years of drought have brought home a lesson that the people of Hamirpur district and its neighbouring districts in Himachal Pradesh have learnt well. These areas had started receiving piped water supply from the government and gave up on their traditional water harvesting structures. In Hamirpur, these structures are called khatris. The khatris are handmade caves constructed at places with hard rocks capable of storing water. When the people of Hamirpur realised that piped water is at best unreliable, they came together to revive the khatris. The government also chipped in. Today, these structures supply enough water to help Hamirpur tide through droughts.

There are two types of khatris in Hamirpur. In the first type, rainwater is collected from the roof through small structures of tin or pipe. This water is used for washing purposes and to bathe cattle. In the other type, water collects in the khatris through seepage, and this water is used for drinking. These khatris are properly washed and chlorinated before monsoon.

Chandra Shekhar Sharma, journalist from Hamirpur, says, "The Himachal Pradesh government has invested around Rs 250-300 million after the drought. But that has gone into asset building and hand pumps, not as compensation to farmers. Farmers are still at the mercy of the elements." Rakesh Lohumi, a journalist from Shimla, says, "The late rains this year have highlighted the problems of piped water provided by governments. The benefits of traditional water harvesting systems, like the khatris and baolis have also become amply clear. The areas near Hamirpur and surrounding districts faced no crisis through this period. This has inspired a number of villages to revive the baolis in their areas." Evidently, the silver lining to the drought clouds is that it has brought people back to these traditional systems.

As the state of Orissa reels under the impact of drought, the villagers of Jharbeda in Sundergarh district are not worried. Their collective effort to revive the ghaghra, a traditional water harvesting structure, has stood them in good stead. Sebastian Lomga, tribal king of the village, says, "We fought the drought successfully thanks to the ghaghra." However, the ghaghra had fallen to disuse somewhere along the way. It was the drought of 2000 that drove home the importance of the ghaghra in this village of the Munda tribals.

The ghaghra is a small but deep pond-like structure, which lies on a plain bed near the slope of a hill. A wide drainage line from the top of the hill would carry rainwater to this structure. No one in the village remembers the origins of the ghaghra. But there are memories. Anthony Munda, a resident, says, "When I was young, the ghaghra was always full, and would irrigate fields in Jharbeda, and even three or four neighbouring villages. In 2000, though, the situation was so bad, we did not have basic drinking water because the ghaghra was silted up completely." Albis Munda, who led the revival work, says, "We got no help from the administration. An organisation called Disha helped us, and we worked together to get the system working. Against a government estimate of Rs 3 lakh, we spent only Rs 25,000 on the rejuvenation work." The ghaghra has filled up, and the village has known no looking back. They have now turned their attention to saving their forests.

Nahin-Barkot in the Raipur division of Dehradun is a land of plenty, with ample water in the driest months of the year -- in sharp contrast to surrounding villages. However, it was not always thus. Limestone mining and forest fires had caused the water sources and streams flowing through the area to dry up. The villagers came together to file a public interest litigation in the Supreme Court. The court ordered closure of the destructive mines. Heartened, the people set about regenerating their water sources and forests. An elderly woman in the village explains how they set about restoring water supply, "To increase water supply in the springs, the villagers themselves worked to construct seven johars (an earthen check dam for rainwater harvesting). This helps arrest the run-off, and ensures that rainwater seeps into the earth."

Villagers claim there is a remarkable increase in water availability in the dharas (springs). The main dhara fills a big tank, and irrigates fields that are situated at a lower elevation. Villagers also use this water for drinking. "We do not face any water shortage, even during the summer months. Earlier, water sources would dry up in summer," says Bhopal Singh, one of the leaders of the biodiversity protection movement in the village. Today, not only are the two dharas in the village perennial, a spring that has been dry for long has been rejuvenated. Singh sees the whole process of rejuvenation as one whole: the water and the forests, he believes, are inextricably linked.