The journey of honey from bee farms to breakfast tables has become complex with time. From wild honey gatherers, honey supply has passed into the hands of cooperatives of individual beekeepers and then to big companies.

The cooperatives could have helped beekeepers demand better prices, but they did not last long. The Kangra Valley Beekeepers Cooperative Industrial Society Limited in Himachal Pradesh is a case in point. It was set up by local beekeepers to market their produce. Prabhat Choudhary, a retired teacher and president of the cooperative, said big companies (packers and exporters) were initially procuring the honey from the cooperative. Then they started luring individual beekeepers by promising them more money. At the same time, they withheld payments: an agro-firm in Punjab that purchased honey from the Kangra cooperative owes it Rs 28 lakh. Unable to sustain losses, the cooperative was disbanded in the mid 1990’s.

“Cooperatives were a threat to the packers and exporters and as the world market grew, they wanted to divert the honey directly from apiary owners to the market. So, they started dismantling our cooperatives,” says Choudhary. He now sells his produce to the same companies. “I have no other option,” he said. The Himalayan state, a preferred destination for honey procurers, has three cooperatives as of now. But their function, according to an official at the Bee Keeper Development Office in Kangra, is largely restricted to representing beekeepers in cases of disease outbreaks.

Beekeepers say they are at the mercy of these packers and exporters (see: The big players) as they have no means of storing honey. Most of them travel with their bee boxes to different states during the flowering season. They prefer to sell the extracted honey in the same state as taking it to their home state would attract value added tax. 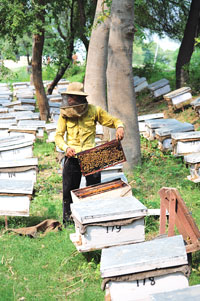 The rates they get depend on the international market. For instance, soon after the EU imposed a ban on Indian honey on June 11 this year, honey price fell from Rs 80 to Rs 60 a kilogramme overnight. Choudhary cited an instance when prices increased from Rs 60 to Rs 90 and then slumped to Rs 65 between December 2009 and March this year. The international price at that time was about Rs 140. Prem Kumar, a beekeeper of Choti Lehar village in Kangra said the packers and exporters have formed a cartel. “They suppress the price because they know we cannot sell it anywhere else. There are no competitive prices for us to choose from,” he said.

To increase their share in the honey market, packers and exporters have been stressing on quantity instead of quality. Beekeepers are encouraged to extract immature honey. For every extraction of mature honey, two to three extractions of immature honey is possible. Beekeepers end up extracting more.

Beekeepers have also moved away from scientific methods of beekeeping: they have stopped maintaining supers (two-chambered bee boxes) wherein honey was extracted from the upper chamber and the lower chamber was left undisturbed; the honey in it was meant for the bee to feed on during non-flowering season. The supers have been replaced by single-chambered boxes and most of the honey in it is extracted. Honey is replaced with sugar syrup which is fed to the bees even during honey flow season, adding artificial sweetness. An official of a honey exporting unit said samples from Bihar have been found having high sugar content.

“Things changed with the EU ban. Exporters suddenly woke up to quality, whereas all through they had been stressing on quantity,” said Ranjit Singh Dhillon, beekeeper in Bathinda district of Punjab.

It was in 1965 that the honey industry in India received a boost when the Punjab Agriculture University introduced the Italian bee species, Apis mellifera. Till then, honey was sourced from bee colonies of native species like the Indian rock bee (Apis dorsata), Indian honey bee (Apis cerana), and the dwarf honey bee (Apis florea). The new bee species soon replaced the native bees in the apiaries of Jammu and Kashmir, Himachal Pradesh, Punjab, Haryana and Uttar Pradesh as the honey yield from their hives was higher. Apis cerana produces four to five kg honey in a year as compared to 20 to 25 kg by Apis mellifera, said Pushpinder Kaur, entomologist with Punjab Agriculture University. Apis dorsata gives a yield of up to 40 kg but its honey is not good enough for exports, she added.

With the change in the bee species, their disease profile also changed. Twenty-five per cent of the Apis mellifera colonies in India perished after a severe attack of Varroa mite in 2005. The mites were reportedly brought to India by infected queen bees from Nepal. The Italian bees are said to be docile and have poor defence. The bees suffered from the European foul brood disease around the same time; it was first detected in Mahabaleshwar in Maharashtra.

The Apis cerana, an otherwise hardy species, was affected by the Thai sac brood disease in the 1990s which spread all along the Western Ghats. “Between 1995 and 2010, about 93,000 bee colonies in Maharashtra perished due to Thai sac brood disease,” said Prakash Nikkam, laboratory assistant with the beekeeping directorate of the Khadi Village Industries.

The threat of diseases (see box: ‘Bee colonies collapse’) and the growing demand for Indian honey made beekeepers turn to antibiotics. “In India only oxytetracycline is allowed and that through certain universities but the rest of the antibiotics are freely available in the market. Ninety per cent of the antibiotics used for both humans and animals are similar in composition the only difference is in the dosage,” said S G Agarwal, vice president, Little Bee Impex, the export unit of Kashmir Apiaries.

Entomologists, on the other hand, recommend only formic acid and oxalic acid solution to get rid of varroa mites and European foul brood disease. S S Ramani of Indian Council of Agricultural Research and coordinator of the research project on honey bee and pollination said his organization does not recommend any antibiotic or pesticide to beekeepers.

The broad spectrum antibiotic oxytetracycline is recommended only in case of a severe attack of European foul brood disease. The antibiotic is mixed with sugar and left on the bee boxes for the bees to feed on. “It is recommended that antibiotic should not be given during honey flow period,” said R K Thakur, scientist with Dr Y S Parmar University of Horticulture and Forestry in Solan in Himachal.

The recommendations have little effect on beekeepers. For instance, Ajay Singh Yadav, an 18-year-old hotel employee-turned-beekeeper in Hissar district of Haryana uses a range of synthetic chemicals. He travels with 200 bee boxes to different regions during flowering season. He uses oxytetracycline to induce the “queen bee to lay more eggs as the label on the packet shows a hen with many eggs.” He is satisfied with the results (see: ‘What beekeepers use’).

Yadav also uses deltramethrin, a pyrethroid insecticide and methyl parathion, an insecticide, besides the relatively harmless sulphur powder to prevent ant attacks. Yadav’s employer, Ishwar Singh Yadav, who runs a small honey processing unit from his home in Hissar, feigned ignorance. He insisted the honey he packs and sells is free of antibiotics and pesticides.

There have been reports of use of other antibiotics as well. An executive with a honey exporting unit said the antibiotic ciprofloxacin was being recommended by the Bihar Agriculture University and residues were found in the honey sourced from Bihar.

The most popular bee medication are pesticide-coated paper strips, illegally imported from China and said to contain the pesticide tau fluvalinate. The strips are dropped into the bee boxes and the fumes from the volatile chemical keep the bees safe. Agents sell these strips at a far lower price ( Rs 100- 150 for a pack of 20 strips) than formic acid and oxalic acid ( Rs 250 per litre; its actual cost is just Rs 20). The Chinese strips flooded the market after 2005 when there was a severe varroa mite attack on beehives.

Notwithstanding the EU ban, Jaswant Singh, owner of the Tiwana Bee Farm in Doraha, 20 km from Ludhiana, recommended oxytetracycline for European foul brood disease and Chinese strips for varroa mite. His company supplies equipments and medicines to beekeepers. Doraha is the hub for the honey processing unit.

An apiculture scientist at the Haryana Agriculture University said since the “pesticide used on the strip is volatile and honey is hygroscopic (attracts moisture) in nature it is very likely the pesticide residue would be found in the honey.”