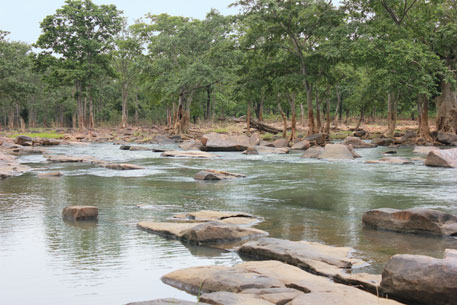 When Ram Gopal Soni joined the Madhya Pradesh State Biodiversity Board (MPSBB) in November 2012 as member secretary, he inherited a legacy of uncertainty. His predecessors had left him with over 23,000 village-level biodiversity management committees (BMCs) and a challenge to make them function.

The 1982 batch Indian Forest Services officer knew the intricacies of the Biological Diversity Act (BDA) 2002, but was new to the concept of access and benefit sharing (ABS) of natural resources when used for commercial purposes. He had experience in agroforestry, but was baffled how to start it without guidelines on ABS from the National Biodiversity Authority (NBA).

India has abundance of plant, animal and genetic resources which are commercially viable in the pharmaceutical, biotechnology, seed, horticulture, botanical medicine, cosmetics, personal care, and food and beverage industries. When natural resources are acquired or used for commercial purposes, their financial incentives should be shared with the community and the respective state biodiversity boards, states BDA. 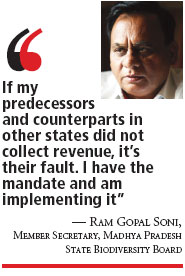 Soni started with two documents in hand—BDA and a letter from Jairam Ramesh, former environment minister. The letter states, “By virtue of the powers vested by this Act, State Biodiversity Boards (SBBs) can regulate the use of bio-resources by the domestic industry. Local-level BMCs in each state also have the power to levy charges for accessing bio-resources for commercial purposes.” According to BDA, users can access biological resources for commercial utilisation only after informing SBBs. The Act also puts NBA in-charge of resources accessed by foreign companies, while Indian companies are the mandate of SBBs.

Soni issued notices to domestic companies directing them to apply for commercial utilisation of bio-resources and pay an application fee of Rs 1,000. He also asked them to deposit two per cent of their revenue to the state’s biodiversity fund as benefit sharing, taking cue from NBA which charges two per cent of the revenue from foreign companies. Big companies like the Rs 2,000-crore Som Distilleries and Breweries Limited, chocolate giant Hershey India, Ruchi Soya and Western Coalfield also received the notices. Some were even issued prosecution orders.

The steps were widely criticised. The environment ministry, NBA, environmentalists and legal experts said Soni’s interpretations of BDA were wrong. The companies were so angry that some dragged Soni to the National Green Tribunal (NGT), terming the action illegal. “Show me the rules that say I am wrong,” argues Soni. “If my predecessors and counterparts in other states did not collect revenue, it is their fault. I have the mandate and am implementing it.”

NBA was formed in 2003, a year after BDA was enacted. So was the NBA expert committee on ABS. In 10 years, the expert committee, NBA or the environment ministry could not notify a revenue collection mechanism for SBBs, nor could they identify the bio-resources that can be enlisted for ABS. “Why should we stop our work because of their failure?” he asks.

Madhya Pradesh’s initiative led SBBs in Karnataka, Andhra Pradesh and Uttarakhand to start functioning as well. But in the absence of guidelines, all the states made their own rules. Andhra Pradesh charges Rs 10,000 as application fee for access to bio-resources. The confusion has only helped industry take advantage. One example is that of Bt brinjal. Research institutions and Indian seed company Mahyco did not inform SBBs when they accessed local brinjal varieties and genetically modified them. SBBs, on the other hand, had no clue how to reprimand them.

ABS can be a big source of revenue for the government. The country can be richer by nearly Rs 25,000 crore annually if it is implemented on foreign players, claims Soni. Last year the country received only Rs 39 lakh under ABS, that too from one company which applied to NBA on its own. In Madhya Pradesh, ABS can fetch Rs 3,000 crore annually, he says.

Efforts to rectify the lacuna started in 2013. NBA, then headed by Balakrishna Pisupati, the only authority chief to have experience in biodiversity administration, drafted ABS guidelines. But it could not see the light of the day. Pisupati resigned in February, reportedly under pressure from the environment ministry for his approach towards ABS.

Following pressure from NGT, the authority did submit the draft but not before diluting it. NBA did not even circulate the new draft among SBBs for comments. The new draft looks no different from the manual NBA had published in 2013 for temporary consultation. It gives no clarity on ABS and does not simplify the functioning of SBBs. 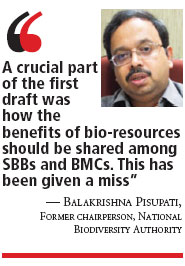 “A crucial part of the first draft was how the benefits of bio-resources should be shared among SBBs and BMCs. Forty-five per cent of the revenue obtained from companies as benefit sharing was to go to SBBs and 50 per cent to BMCs. This has been given a miss,” says Pisupati.

“The simple and transparent ABS application processing procedures have also been removed. The earlier draft stated that NBA secretariat would take all the decisions on ABS. But the new draft goes back to the old procedure where NBA expert committee on ABS takes all the decisions. The committee has external members and takes months to hold meetings. This leads to inordinate delays in decision making,” he says. This apart, the new draft does not state how the benefits should be calculated and for which bio-resource, he adds.

These could create problems, says a legal expert who did not wish to be named. Despite a Central law, each state will have its own calculations and charges. There would be disparity across the country and eventually more litigation.

“The new draft states NBA will get five per cent of the benefits. This is already happening,” says a member of West Bengal SSB. “It does not give a formula for the benefit to flow down the institutional hierarchy and reach conservators. It does not state from where SSBs will get revenue, though it has chalked out revenue procedures for itself.”

Shalini Bhutani, legal expert and convenor of Campaign for Conservation and Community Control over Biodiversity, says the new draft fails to fix accountability of research institutes over use of natural resources. Also, most states have their own rules at present. The new draft provides that the state biodiversity rules shall apply. “Balancing a Central Act with the federal structure will be a tightrope walk,” she says. The campaign had suggested post-access monitoring to ensure compliance of ABS guidelines. But it does not find mention in the new draft, she adds.

However, it has introduced the concept of provider obligation. The new draft states that the user must respect customs, traditions and values of the provider before, during and after the access. “At a recent NBA meeting, a committee was formed to finalise the guidelines before April 10 and send it to the environment ministry for notification,” NBA chairperson Hem Pande told Down To Earth. However, he did not clarify if the draft will be sent for public comments. NGT has set a deadline for NBA and the environment ministry an August deadline to notify the rules.

The test for NBA is if the new guidelines will be able to provide solutions to problems states face in ABS ever since the biodiversity Act came into force.