Largest paper manufacturer is using most of the bamboo in Maharashtra, leaving little for residents

In April this year, Gadchiroli district in Maharashtra made history. One of its villages became the country’s first to win the right to sell and harvest bamboo. Environment minister Jairam Ramesh handed over transit pass books to residents of Mendha Lekha village, allowing them to exercise community forest rights over bamboo guaranteed in the Forest Rights Act (FRA) of 2006. But for the rest of the villages bamboo is still a distant dream.

Since 1968 most of the bamboo in the state has been leased to the largest paper manufacturing company in the country, Ballarpur Industries Limited (BILT). It controls 68 per cent of total bamboo area in the state which is 841,200 hectares (ha). Gadchiroli and another tribal district Chandrapur together account for 66 per cent (556,400 ha) of the state’s bamboo.

Of the 158,241 ha of bamboo area in Gadchiroli, 133,874 ha, comprising 84 of the district’s 133 felling series (compartments that are to be felled in the annual felling cycle), has been leased to the private company. It has also been allotted eight felling series in Chandrapur.

The paper mill company pays the state a royalty of Rs 1,500 per tonne of bamboo, while private contractors pay Rs 2,500 or more per tonne. This means the paper mill pays just Rs 2 per metre of bamboo, the same as the nistaar (forest produce meant for direct consumption of people) rate. The same bamboo costs Rs 6-Rs 7 per metre in the open market (see ‘Bamboo freed’, Down To Earth, May 16-31, 2011).

Forest department sources say the paper mill gets added subsidy in terms of more bamboo per tonne. For weighing felled bamboo, the department treats one tonne as 0.8 tonne to make up for the reduction in weight due to moisture loss.

V K Anand, former president of the Madhya Pradesh Forest Contractors Association, who has staunchly opposed the company’s contract with the state, says the subsidy is unnecessary. “A similar subsidy was given to Nepa Paper Mill in Madhya Pradesh, but it manufactures newsprint in which profit margins are low.” Ballarpur Industries is manufacturing the finest and most expensive paper in the country, and its profit margin is much higher, he adds.

Mohan Jha, chief conservator, resource utilisation, state forest department, justifies the low royalty. The company incurs its own felling and transportation costs, he says. The price of bamboo at factory gate comes to Rs 4,000 per tonne, says Suneel Pande, vice-president in-charge of raw material with Ballarpur Industries, adding it is “higher than the price of wood we are procuring”. But the department’s revenue figures tell a different story. From 2007 to 2010 the department’s earnings from the bamboo supplied to the company were lower than from bamboo felled by itself, and by the contractors on tender basis.

In 2007-08, the department-felled bamboo fetched Rs 939.54 per tonne and the contractor-felled Rs 1,945.05 per tonne against Rs 600 per tonne paid by the company then. In 2009-10 the department-felled and contractor-felled bamboo earned Rs 4,744.81 and Rs 2,511 per tonne, respectively, against the company’s Rs 1,500 per tonne. Post 2008-09, the mill’s share in the department’s total revenue from all produce has fallen below two per cent bec-ause of low extraction following a price hike (see table). In 2009, the state raised the company’s royalty from Rs 650 per tonne to Rs 1,495 per tonne. The company challenged the hike in the Bombay High Court. The case is pending with the Nagpur bench of the court, which has given an interim rate of Rs 1,500 per tonne.

As per the contract, the paper mill company is required to supply up to 35,000 tonnes of bamboo per year to the forest department for nistaar purposes. But most of this demand—almost one-fifth of the company’s total annual extraction quota—has never reached the nistaar claimants. Till date, the department has claimed not more than 0.5 million bamboo poles per year (approximately 1,600 tonnes). Jha explains this low demand. “The department itself supplements nis-taar requirements.” There is no information available on the remaining bamboo the mill was supposed to supply.

Jha’s explanation seems far-fetched. According to the department, 2.5 million long bamboo poles are given every year to the 8,314 registered burad (bamboo craftsmen) families in the state. Another 0.5 million are supplied to farmer families in the state’s Vidarbha region. But a government resolution, dated May 30, 1997, says each registered burad family should be provided 1,500 bamboo poles per year, which equals to 12.5 million in a year. Against the official rate of 50 bamboo poles per family annually in Vidarbha, the 0.5 million would fulfil the demands of only 10,000 families, a miniscule number. Jha claims, “Hardly half of the bamboo supplied by the department is ever lifted.”

Residents of 23 villages in Gadchiroli and Chandrapur say nistaar supplies are irregular and insufficient. Rambhau Dhande, a resident of village Sitarampeth in Chandrapur, says, “All the 56 families in our village are burads. We need 15-20 bamboos per family per day for 200 days a year, but supplies are constantly short.” Nizamshah Katenge, resident of village Saleh in Gadchiroli, says, “Five villages in our vicinity do not have bamboo in their forests. We have no option but to get it from neighbouring villages, resulting in frequent conflicts. We have repeatedly tried getting nistaar bamboo, but our applications are never accepted at the depot.” Devaji Tofa, gram sabha president of Mendha Lekha and a prominent forest rights activist, concurs, “Despite the high price people would like to procure nistaar bamboo. But the supply is low and irregular.”

Due to bamboo shortage, residents of village Markegaon in Gadchiroli are using pigeon pea stems to make jhanji, a woven screen used as temporary walls for houses, cattleshed and godowns. Resident Shankar Madawi says, “These screens last a year or two, whereas bamboo screens can be used for 10 years.” Madawi adds, “We need bamboo for fencing and roofing rafters, but have to manage with substitutes. Once we start felling our own bamboo, we will meet our needs before selling.” Tofa thinks if demand from villages that do not have bamboo and unregistered burads is combined, local consumption will rise substantially, leaving less bamboo for the market, and consequently forcing procurers like Ballarpur Industries to pay more. Mohan Hirabai Hiralal of non-profit Vrikshamitra, who has been fighting for Mendha Lekha’s forest rights, alleges, “The forest department is choosing to underplay the nistaar bamboo demand and safeguard the mill’s in-terests, for reasons best known to itself.”

According to Jha, about 0.2 million tonnes of bamboo can be extracted from Gadchiroli and Chandrapur in a year. Small private contractors and residents are not equipped to manage such a huge amount. “Especially in Naxalite-infested southern Gadchiroli where there are no roads, extraction will be impossible. The department too is unable to work there,” adds U M Farookhi, deputy conservator of forests, Bhamragadh in Gadchiroli. “Unless it is extracted on a scale at which Ballarpur Industries is doing, it will all go waste,” says Jha.

Department officials refused to comment on how the company was able to work in a Naxalite-affected area. Contractors and residents disagree. “The company is exploiting a valuable natural resource. But it cannot do without it either since bamboo pulp is a must to manufacture fine quality paper,” says Anand of the contractors’ association. “If someone else gets the bamboo felling contract, the paper mill company will have to procure bamboo from the open market,” he adds.

Since Mendha Lekha got the transit passes and many villages in Gadchiroli received community forest rights claim papers, contractors are offering Rs 20 per bamboo pole, says Shantaram Hichami, resident of village Kalshi in Gadchiroli and president of the village’s forest rights committee. “All villages want to axe the company’s lease and sell spare bamboo to contractors. But we cannot do so as the forest department has not marked our share of land where bamboo can be felled,” adds Hichami. Hirabai Hiralal says, “If the department feels the residents cannot manage their bamboo, then it should support them till they are able to.” Why go for an arrangement that is benefiting only the mill at everyone else’s cost? he asks.

From the time the company started felling bamboo in Gadchiroli, it has consistently paid the least felling wage in the area. The current wage, says Pande of the paper mill, is Rs 15-Rs 18 per bundle. Workers say they are being paid Rs 12. Since the company controls 85 per cent of bamboo area in Gadchiroli, people have no option but to work for low wages.

Chandrapur district has seen many struggles against the company for wage hike. “For each bundle, we have to fell five to six bamboo poles and cut them into two-metre pieces,” says Chaitu Ishtam of village Kalshi. “This wage is lower than the Rs 6-Rs 7 per bamboo that contractors in the area pay,” he adds. In Mendha Lekha, the gram sabha gave a wage of Rs 9 per bamboo. “By allowing the company to work in these areas, the government is letting it get away with exploiting labour on a large scale,” says Tofa.

The company has also been accused of over-extracting bamboo. Between 2001 and 2005, the gram sabhas of Marda and Markegaon villages in Gadchiroli got into a conflict with the company because the latter was destroying bamboo clumps. “They had brought outside labour and were felling all mature bamboos,” says Shankar Madawi of Markegaon. Following our protests, the company never came back, he adds. The local range officer was shown the damage, but no case was registered.

Marda has a similar tale. Vishu Sainuji Potawi, Forest Rights Committee president of Marda, says, “We fought against over-extraction and refused to let outsiders fell bamboo.” After that the company never came back, he adds.

Tofa says bringing outside labour and over-extraction are the common practices of the paper mill company. “Most villages are unable to resist. Even when they do, their complaints are never registered.”

Anna Dani, Maharashtra state secretary of forests and environment, says the company’s contract is an old one, and its terms, especially the concessional royalty for bamboo, were aimed at setting up industry in the area and generating employment. When questions regarding low royalty were raised, she said she was not aware of them. 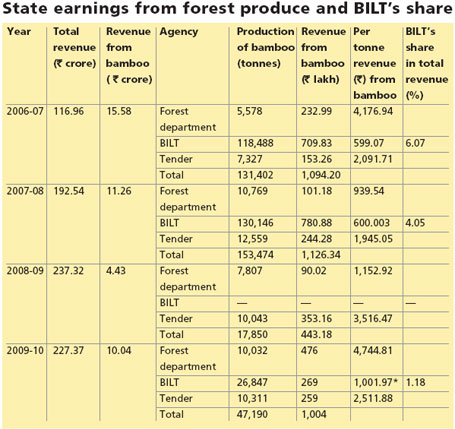