Than regret loss that happens in millions 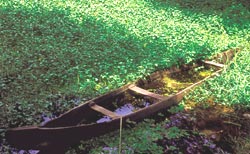 Last year, a cricketing row broke out between New Zealand and India, when a member of the Indian team was fined for carrying soiled shoes. For India, it was cricketing pride at stake. But New Zealand customs authorities were merely following quarantine regulations. The shoes could have carried a possible invasive.

For such species, the clich -- prevention is better than cure -- works. It's something countries like Australia, New Zealand and the US have learnt after bitter experiences. They now accept that intercepting potential invasives is the key to a more cost-effective and efficient way of controlling these noxious invaders. India, on the other hand, has just taken off the starting line. It has only recently updated its rules to monitor the import of seeds, plants and plant products for invasive pests and weeds -- the Plant Quarantine (Regulation Of Import Into India) Order 2003. In this order, the government has also introduced a mandatory Pest Risk Analysis for any new product or an already imported product being sourced from a new country. The analysis tries to predict the possibility of a consignment carrying a potential pest or weed entering the country may of the product. "The depth to which the analysis is done depends upon how great the economic benefit is from the product," explains Reddy . "For example import of pulses is necessary because India is not self-sufficient. So we right away make fumigation mandatory. But if you are importing strawberry, we shall conduct detailed analysis because many viruses, fungal pests, bacteria are involved." Such analysis forms the bedrock of invasive detecting techniques in alert countries like New Zealand.

But rules alone do not work. India's quarantine workforce comprises a mere 200 technical staff, only 5 per cent of that in the US and about 7 per cent of the Chinese (a country which has very recently begun to secure its borders against invasive species).

Reddy admits such a tiny team cannot monitor India's large territorial and marine borders, and the airways. The laws, too, are lax. "We are not even allowed to monitor the discharge of ballast waters from ships, unlike in other countries," he says. While it is aware of the threat, India does not guard its environment against invaders.


Once established and naturalised, detection and prevention before the species becomes invasive is next to impossible. The only hope is to control contamination, or completely eliminate the threat. Options to curtail spread are limited. In the case of weeds, mechanical removal is the simplest way. But it rarely works. You can keep uprooting Lantana; it will come back. Even controlled fire does not work for many weeds. Indeed, the effect is often a fire-cleared field, now made ready for the invasive to take over.

If the pest is not a small insect but a large mammal, the tactic is simple -- shoot to kill off. Take the case of spotted deer, introduced to the Andaman Islands between 1915 and 1930. In the absence of a predator, their spread has been spectacular and debilitating, They have browsed the forest floors so rampantly that the ecosystem has changed. The undergrowth is missing and some tree species have stopped regenerating. "The changes could be irreversible even if the feral deer is now eliminated, studies conducted in other countries on the deer show," says Rauf Ali, an ecologist with the Foundation for Ecological Research, Advocacy and Learning, Pondicherry. But India's wildlife laws put the deer into schedule I -- a list of animals most worth protecting. Ali and other ecologists have been begging the Indian government to allow the deer to be hunted, but the animal cannot be touched.


There are two more complicated and sophisticated methods to uproot invasives -- spraying chemicals or using biological control agents. The former is today a huge global industry; the latter is finding its feet in scientific labs. Most countries have accepted chemical spray in the case of agriculture to control weeds and pests today. Its indiscriminate use has had horrific health impacts. Pests and weeds have mutated and become more persistent.

Biological control is touted as a less dangerous option. But it has not been successful in actual field conditions. The biological control idea is simple: find a predator of a pest or weed in its original habitat, and introduce it in the invaded region. But some tough parameters have to be met. The predator needs to be host-specific, for instance, and not predate on other plants or animals. In 1889, the Australian vedalia lady beetle was brought to California, USA, to control the cottony-cushion scale insect threatening citrus orchids. The beetle completely eradicated the pest. In India, too, the introduction of Dactylopius opuntiae to control the prickly pear has been a great success (see box on previous page: India: Bio-control).

But ascertaining such host-specificity is difficult. Numerous examples exist of biocontrol agents themselves becoming pests. The most infamous one is that of the release of the predatory snail Euglandina rosea to control the alien African giant snail in the Hawaiian Islands. E rosea ate up most of the 41 indigenous snail species; the African giant snail still crawls over Hawaii's forest floors. "India lacks the ability to monitor the release of biocontrol agents. We can experiment, but unless people are involved in the process of recovery and monitoring the real impact of a biocontrol agent in the heterogeneous environment of a tropical country like India, it is difficult for biological control to actually work," says Reddy.


India cannot replicate the governance and monitoring that developed countries like New Zealand and the US practice. The latter now has a federal umbrella agency to sniff out invasives, one empowered with a huge budget and stringent regulations. New Zealand, especially vulnerable because it is an island, has tight quarantine regulations and constant monitoring. "In countries like New Zealand and Australia an entire area can be sealed off if a contamination is reported," explains S Ramani. India, heterogenous and complex, can hardly afford to take such measures. Thus prevention becomes paramount for this country, and therefore prediction methods, risk analyses and evaluations of potential invasives in tropical environments.

But where are the taxonomists to do all this? Where is the original research on invasive alien species in India? The scattered bits and pieces of research carried out in different universities and some government laboratories is neither focussed nor organized. India needs a central and easily accessible reservoir of data, a directed campaign that builds on existing knowledge and does not repeat itself. "We have to generate our own data," says Shanker. The same pest or weed can act differently in different climes: New Zealand's research priorities cannot be India's, too.

Also, India cannot ignore the option of seizing some invasions as opportunities. Lantana basket weavers, of the Korava community of Pudhuputi village in Tamil nadu's Dindgul district, have been using at least five more weeds besides lantana for more than 60 recorded years. While science from the top can assist, it is finally the people suffering the impacts of invasives who can create a credible force to fight this kind of terrorism. India needs to arm its communities, and must do it yesterday.